Cell line development and assurance of monoclonality are critical steps in the process of generating biopharmaceutical molecules, such as monoclonal antibodies. The process begins with the delivery of a gene encoding a protein of interest into a target cell type. A cell line can be established following the isolation of a single viable cell robustly expressing the protein of interest. A key milestone in this process is documenting proof of clonality, to ensure the genetic reproducibility of the cell line. Subsequent steps involve the characterization of the clones for productivity (titer), quality and stability (Figure 1)

The CloneSelect™ Single-Cell Printer™ (SCP) is an innovative benchtop device for the gentle and precise isolation of single living cells from a liquid sample. The SCP uses microfluidics cartridges to precisely isolate individual cells, while also minimizing cross-contamination when printing different cell types. When coupled with the rapid imaging technology of the CloneSelect™ Imager (CSI), this allows for a significant increase in the efficiency of the cell line development process.

Here, we demonstrate a unified workflow that combines single cell deposition and clonality verification. We couple the use of the SCP and CSI to deposit single cells into a microplate and to then confirm the presence of those cells and characterize their growth over several days, respectively. Finally, we demonstrate how to generate reports documenting the evidence of clonality for submission to regulatory bodies.

For both single cell printing and limiting dilution, CHO-K1 cells (ATCC) were used. Other cell lines used, including HEK and L929 were prepared in a similar fashion. To prepare for a single-cell printing run, cells were resuspended to 1 x 106 cells/mL density in low serum media (1% FBS) or PBS. To eliminate clumping, cells were filtered through a 40 µm strainer (Corning, 431750) prior to loading into a printer cartridge.

Imaging and efficiency at the cartridge and microplate level

Plates were imaged on the CSI or CSI-FL within 30 minutes seeding to allow cells to settle and adhere to well bottom. To quantify printing efficiency on the SCP, the archived nozzle images were evaluated for each well. To quantify printing efficiency at the microplate level, CHO-K1 cells were fluorescently labeled (1 µM Calcein AM, Molecular Devices) prior to setting up a limiting dilution or SCP run. Microplates were imaged on CSI-FL and the cell count feature was used to count cells. Only single cell-containing wells were evaluated for viability at day 10, while other wells were excluded.

The SCP is an innovative benchtop device for the gentle and precise isolation of single living cells from a liquid sample. The system utilizes a disposable cartridge, which minimizes cross-contamination when printing different cell types. Each cartridge can be used to print several 96-well or 384-well microplates using a single run. To deposit single cells, the SCP generates microscopic droplets in a predictable sequence by a piezo-driven actuator (Figure 2A). A high resolution camera continuously captures images at the nozzle of the cartridge, while an imaging algorithm analyzes images at the end of the nozzle to detect the presence of single cells. A vacuum system is active when droplets containing no cells or multiple cells are recognized, causing those droplets to be siphoned away. When single-cell events are identified by the algorithm, a pneumatic shutter is triggered to close the vacuum, allowing the droplet encapsulating the single cell to fall into the well below before the printer head moves to the next well.

Evidence of clonality at the cartridge nozzle

A disposable print cartridge is imaged at the nozzle using a high depth-of-field camera which ensures cells appear in focus >99% of the time. When a droplet containing a single cell is detected, a sequence of 5 images is captured to track that single cell as it descends the nozzle end (Figure 2B). Images 1-3 are captured prior to droplet formation and image 5 shows the nozzle after droplet ejection. A circular region that is designated a priori by the operator is overlaid on the image 4, demarcating the single-cell event. Note that the nozzle-based image evidence is complimentary to that acquired at the microplate surface. We observed a high correlation of 98.9% ± 1.8 (n = 282 wells) between the nozzle and microplate images that supports this claim (data not shown). 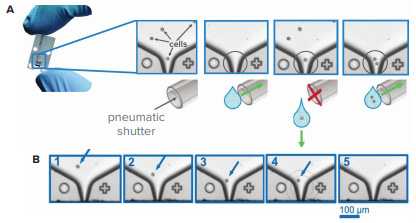 Figure 2. The CloneSelect ™ Single Cell Printer Technology. (A) After a cell-containing sample is loaded into cartridge, the cartridge is mounted onto the SCP and a print run can be initiated. During the printing procedure droplets are continuously generated by a piezo-driven actuator in a predictable sequence. Droplets that contain no cells or more than one cell are siphoned away using a vacuum mechnism directly below the nozzle. When single-cell events are identified, a shutter mechanism inhibits the vacuum allowing the single cell-containing droplet to fall into the well. (B) When a single cell event is detected, five images are captured to provide evidence of clonality at the nozzle. Images 1-3 show the presence of a cell prior to droplet ejection, image 4 marks the region containing the single cell, and image 5 shows nozzle after droplet ejection.

The CloneSelect Imager (CSI) allows fast and consistent optical imaging of the microplate. 96 and 384-well microplates can be imaged within 90 seconds. An analysis algorithm allows objective assessment of cell confluence in label-free fashion upon imaging in brightfield. In the workflow we propose here, the growth of clones from limiting dilution and SCP printing session are tracked over 10 days with the CSI. In the Plate Thumbnails tab, green overlays show the segmentation of colonies originating from single cells. Clicking on individual wells switches to View Image tab, allowing visualization of colony at whole well level (Figure 3A). The Loci Count tab allows accurate colony counting based on optimizing colony area and colony compactness parameters (Figure 3B). Here, single wells can be clicked on to optimize colony count before returning to the whole plate view. The Report Generator tab can be utilized to generate reports for individual wells using images from day 0 onwards (Figure 3C). Here, a cell region (green box) can be defined for each time point. The example cell shown contains 5 time points. The software allows slight adjustment of the cell region to ensure that the cell cluster within the nascent colony is centered. Figure 3. Microplate imaging, clone characterization and report generation by the CloneSelect Imager. (A) Day-10 clones derived from SCP printing session are imaged. The Plate Thumbnails tab allows visualization of colonies. Clicking on individual wells navigates to the user to the View Image tab, where a whole-well image is shown. (B) The Loci Count tab allows counting of colonies to be optimized by adjusting the area and compactness, a measure of roundness, of a colony. (C) In the Generate Report tab, cell regions (green boxes) can be designated and adjusted for each time point in a series to characterize the growth from a single cell to a colony.

The report generation workflow uses a wizard-driven, easy-to-use software to enable rapid set up, customization, and delivery of a report for submission to regulatory bodies. The user can demonstrate the absence of a second cell within a well in two ways: by showing all regions of a well over the time course (Figure 4A) or by marking the debris regions from day 0 onward (Figure 4B). Since cell-like debris makes it is difficult to conclusively assess clonality at day 0, the designation of debris regions adds additional confidence by showing that debris do not divide over time.

Figure 4. Report generation to confirm the absence of a second cell. (A) Customization of a report can include exporting all regions over timepoints in a series. (B) Alternatively or coincidentally, customization allows the operator to designate debris regions. These ROIs are exported for all the timepoints of a specified well to confirm that debris structures are not viable and undergoing cell division.

To assess single-cell printing efficiency using the SCP, we analyzed the images from the cartridge nozzle to ensure that a bona fide single-cell event is observed prior to ejection of the droplet into the well. A total single-cell printing efficiency of 88.5% ±5.5 (n = 9 microplates) was achieved using the SCP based on analysis of events at the nozzle level of the instrument. Two-cell and null events were observed much less frequently (6.7% and 4.8%, respectively). The average print time per 96-well microplates was 8.1 ± 2.8 min. A pictorial illustration shows that a typical SCP print session into a 96-well microplate results in 85 wells containing 1 cell, 6 wells containing >1 cell and 5 wells containing no cells (Figure 5A). 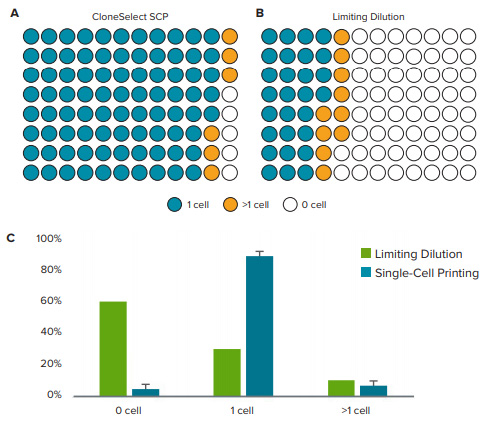 Similarly, the viabilities of single cellderived clones from SCP for different cell types were compared (Figure 6E). In general, a typical viability greater than 75% was observed when using CHO, HEK, and other common cell lines. It is important to note that cell viability can vary based upon the cell type, sample preparation, gating parameters, cell media, and other external factors. 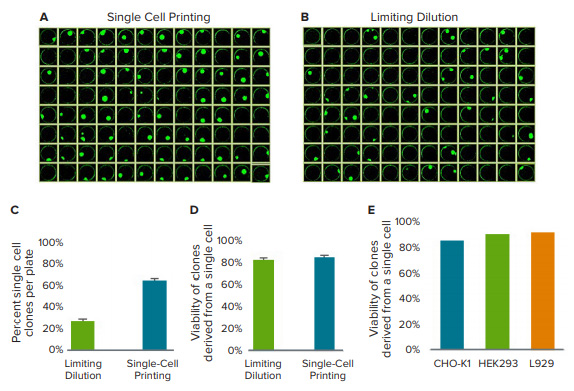 We demonstrate a workflow using the CloneSelect Single Cell Printer (SCP) and CloneSelect Imager (CSI) that increases the efficiency of single-cell isolation and the documentation of monoclonality. The SCP technology provides image-based evidence for monoclonality, efficient and fast single-cell seeding combined with excellent cell viability, and minimal risk of cross contamination. A high (>85%) efficiency of single cell deposition allows more complete use of a microplate’s wells. The CSI allows the printed cells to be imaged over time to characterize the growth of single cell-derived clones over time. The characterization of the clones can be made easy by loci counting feature and documentation is easily obtained via automated report generation. In this workflow, a 3-fold higher clonal recovery rate means more clones can be analyzed downstream, thus increasing productivity while saving labor time and reagent costs.