Inflammation, the body’s reaction to infection, irritation, or other injury, is accompanied by increased endothelial chemokine production and adhesion molecule expression, which may result in an extensive neutrophil infiltration. The search for novel anti-inflammatory substances able to down-regulate these parameters, as well as tissue damage, holds great therapeutic promise. Screening for these new therapeutics requires a fast and sensitive platform for cytokine quantification.

Molecular Devices SpectraMax® Paradigm® Multi-Mode Microplate Detection Platform is a user upgradeable microplate reader that allows for real-time system configuration by the user in less than two minutes. Alpha Technology capability can be added to the system at any time as a user’s detection needs evolve.

The SpectraMax Paradigm Platform was used to rapidly quantify the cytokine TNF-alpha and conduct a sensitive screen for anti-inflammatory metabolites from cyanobacteria in TNF-alpha-stimulated human endothelial cells. AlphaLISA,® a bead-based, homogeneous assay for studying molecular interactions in a microplate format, was used for both cytokine quantitation and screening for anti-inflammatory cyanobacterial fractions that could potentially lead to the development of new therapeutics. Compared to traditional ELISA methods, which have wash steps that can damage cell monolayers, AlphaLISA minimizes cell loss, resulting in smaller standard deviations and more accurate results.

The first step was to obtain purified TNFalpha protein that could be used in assays to stimulate the inflammatory response in endothelial cells. To this end, the human cytokine TNF-alpha was expressed in the yeast Pichia pastoris, which produces large amounts of recombinant protein without endotoxins that can interfere with cell-based assays. 10-20 mg of biologically active protein was purified per liter of yeast culture. The SpectraMax Paradigm Platform was able to quantify the protein down to the low picomolar level using an AlphaLISA method (Figure 1). A preconfigured protocol with optimized reader settings enabled reading of a 384-well plate in just two minutes.

Next, an AlphaLISA assay was developed to detect levels of pro-inflammatory factors produced by endothelial cells in response to TNF-alpha stimulation. Human lung microvascular endothelial cells (HLMVEC) were treated with the human recombinant TNF-alpha purified above to induce Intercellular Adhesion Molecule 1 (ICAM-1) expression. ICAM-1 was up-regulated upon 18 hours of incubation with TNF-alpha. The level of ICAM-1 expression was quantified using AlphaLISA (Figure 2A).

Figure 2. ICAM-1 and IL-8 upregulation in HL-MVEC. After 18 hours of TNF–alpha stimulation, upregulation of ICAM-1 (A) and IL-8 (B) in HL-MVEC was measured using AlphaLISA on the SpectraMax Paradigm Platform.

Cyanobacteria, also known as blue-green algae, possess a remarkable diversity of metabolites, some of which are therapeutically promising compounds currently being tested for the treatment of inflammatory diseases.1,2,3 The methods described above were used to screen for anti-inflammatory compounds from cyanobacteria. HL-MVEC were pre-treated with different fractions isolated from the cyanobacterium Nostoc and then stimulated with 0.4 ng of human TNF-alpha. Eighteen hours later, ICAM-1 up-regulation was assayed using AlphaLISA technology on the SpectraMax Paradigm Platform, and cell culture supernatants were further analyzed for IL-8 secretion. Cyanobacterial fraction 8721,6 (Figure 3) showed a significant reduction in ICAM-1 production, indicating antiinflammatory activity. This fraction also showed a clear reduction in IL-8 secretion (data not shown). Fractions were tested for cytotoxicity prior to AlphaLISA and shown to have negligible effect on cell health. 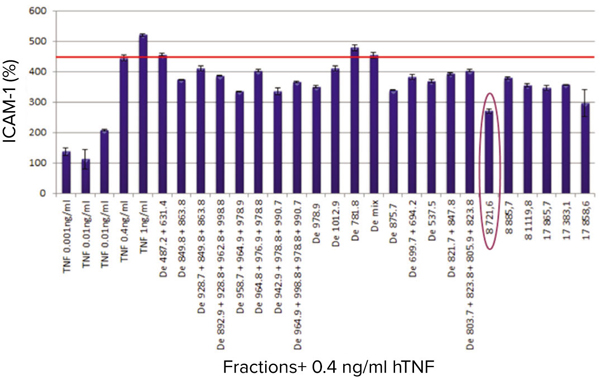 The SpectraMax Paradigm Platform in conjunction with AlphaLISA provides a powerful tool to screen for novel therapeutics in a pathologically relevant, endothelial cell-based model. Sensitivity and speed with up to 1536-well detection capability, combined with pre-optimized software protocols that let users get up and running faster, make the SpectraMax Paradigm Platform the best choice for screening with Alpha Technology