In this study, we demonstrate how the CatchPoint® cGMP Fluorescent Assay Kit combined with the SpectraMax® i3 MultiMode Detection Platform can be used to measure cGMP in RFL-6 cells treated with atrial natriuretic peptide (ANP) [1, 2]. See assay workflow in Figure 1.

The second messenger 3’, 5’ cyclic guanosine monophosphate (cGMP) and its associated proteins have been shown to be integral in regulating physiological responses such as smooth muscle relaxation, vasodilation, kidney function, phototransduction, and penile erection [3–7].

ANP, a hormone found in many vertebrates, signals through cGMP to reduce blood pressure by stimulating the excretion of sodium and water from the kidneys and relaxing vascular smooth muscle [8, 9]. Binding of ANP to its receptor leads to conversion of GTP to cGMP, which in turn activates protein kinase G, causing activation of a number of biologically relevant targets.

The CatchPoint cGMP Fluorescent Assay Kit measures cGMP levels via a competitive immunoassay (Figure 2). The assay requires only a single washing step, and readings can be taken in as little as 10 minutes or as long as 24 hours following substrate addition.

On the day of assay, cell confluence was measured using the transmitted light channel of the SpectraMax MiniMax 300 Imaging Cytometer and StainFree™ Cell Detection Technology, which enables accurate measurement of cell counts or percent area covered by cells (confluence) for quality control purposes. Rows of cells with high cell confluence and low inter-well variability were selected for the CatchPoint assay (Figure 3). Cells were incubated in pre-stimulation buffer, KRBG buffer containing 0.75 mM IBMX, for 10 minutes at room temperature. Cells were then treated with ANP starting at 1 µM with a 1:3 dilution series for 15 minutes at 37°C. Following treatment, cells were lysed according to the CatchPoint assay protocol. 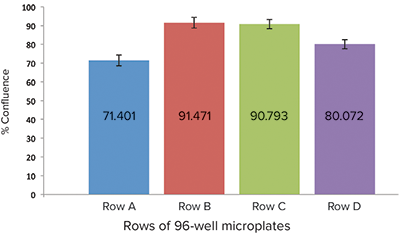 Figure 3: Relative cell confluence of RFL-6 cell-seeded wells. Row B was chosen for the assay because of high-well confluence and low inter-well variability

The CatchPoint assay was performed as described in the product insert. A cGMP calibrator curve was performed to verify assay performance, as well as provide a means of calculating the amount of cGMP in cellular assay samples. Samples were read on the SpectraMax i3 MultiMode Microplate Reader 60 minutes after StopLight Red substrate addition. All data analysis and curve fitting were performed with SoftMax® Pro Software. A preconfigured protocol is available in the software’s protocol library.

To assess cell confluence before cell pre-stimulation and treatment, the MiniMax cytometer and StainFree technology were used to compare percent cell confluence among different rows of the microplate (Figure 3). Row B was chosen for assay due to consistent percent confluence from well to well. Triplicate samples were taken from each treated well and assayed.

Figures 4 and 5 show results for the CatchPoint cGMP calibrator curve and ANP response cell-based assay. Both curves were generated using the 4-parameter curve fit in SoftMax Pro Software. The calibrator curve had an EC50 of 3.1 nM, which agreed closely with previously published data. The Z’ factor was 0.82.

The ANP concentration-response observed in RFL-6 cells had an EC50 of 41 nM, which was also consistent with previously reported results. 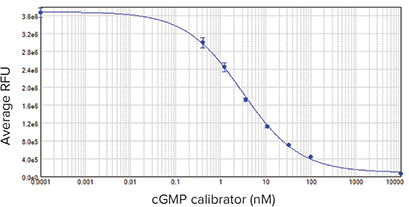 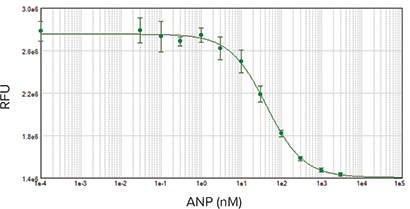 The CatchPoint Cyclic GMP Fluorescent Assay Kit is accurate and robust for measuring cGMP in cell-based assays. The assay’s high signal stability (can be read 10 minutes to 24 hours after substrate addition), excellent Z’ factor, and ability to be performed on plate readers with a fluorescence intensity detection mode make the assay a versatile choice for highthroughput screening. The SpectraMax MiniMax 300 Imaging Cytometer and StainFree analysis offer an additional level of quality control for cell-based assays.