Gq-coupled receptors are transmembrane proteins that are responsible for transmitting extracellular signals to the inside of the cell, which ultimately leads to changes in gene expression. Some Gq-coupled receptors can be activated through the specific binding of ligands or drugs to the extracellular domains of the protein. This interaction leads to downstream events such as mobilization of calcium from intracellular storage vesicles into the cytoplasm of the cell. Improper Gq-coupled receptor function is implicated in cancer, neurodegenerative and cardiovascular diseases. Therefore, it is important to compare receptor function in normal and disease states.

The cell line used in these studies, M1 CHO, is stably transfected with the M1 muscarinic Gq-coupled receptor1. This receptor is stimulated with carbachol, which leads to the release of calcium from the endoplasmic reticulum into the cytosol. Activation of the M1 Gq-coupled receptor can be monitored using the FlexStation® Microplte Reader in conjunction with either the calcium-sensitive fluorescent dye, Fluo-3, or the FlexStation Calcium Assay Kit from Molecular Devices. The results demonstrate that a similar range of EC50 values is obtained for carbachol using both detection methods. 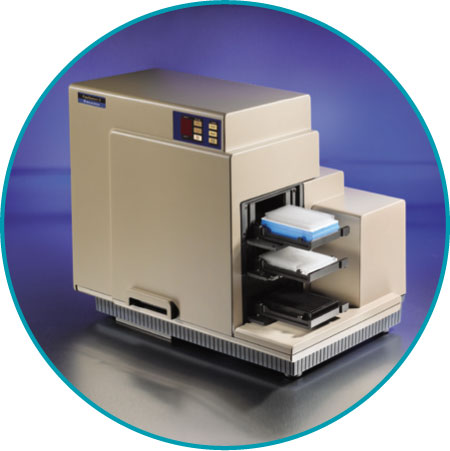 Cells were seeded the night before the experiment at a concentration of 30,000 cells/ well in a volume of 100 µL per well of black walled, clear bottomed, 96-well microplates (E&K distributors, cat# 655090). Cells were incubated either for one hour with a buffer containing 4.2 µM Fluo-3 or for one-half hour with 1X Loading Buffer from the FlexStation Calcium Assay Kit (Molecular Devices, cat#R8041) before using FlexStation to dispense carbachol and monitor the mobilization of calcium into the cell cytosol. All experiments were performed at a final concentration of 2.5 mM probenecid in order to inhibit endogenous efflux pumps present in M1 CHO cells.

Cells were exposed to a range of carbachol (0 to 1 µM) using half log dilutions of the agonist. Results are representative of at least four independent experiments performed over a period of at least two different days. The raw data was analyzed as “Max-Min” and “Absolute” RFU values (Figures 1, 2). The average value of replicate samples was plotted on a graph using a curve fit of four parameter, for which the “C” value is the concentration of drug that causes 50% of maximal response (EC50 value, see Figure 3). The EC50 values for carbachol using Fluo-3 ranged from 19–39 nM, whereas it ranged from 12–30 nM using the FlexStation Calcium Assay Kit (see Figures 3 and 4). 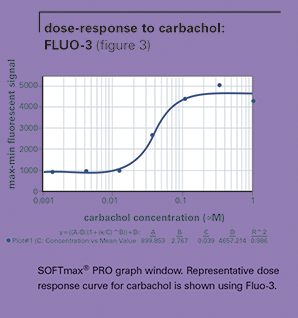 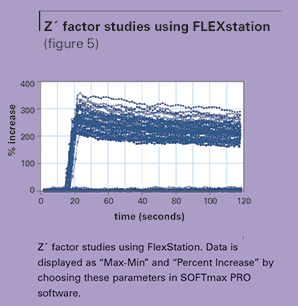 FlexStation generates highly reproducible results for calcium mobilization assays used to monitor the activity of Gq-coupled receptors (Fig. 3). First, the EC50 values obtained for carbachol were consistent between detection methods, Fluo-3 and the FlexStation Calcium Assay Kit. Also, assays analyzed on the same day showed less than two-fold differences, and assays analyzed on different days showed less than four-fold differences, which further demonstrates the reliable performance of the FlexStation System (data not shown). Lastly, the Z´ factor determination indicates that FlexStation provides an excellent tool for assay development for the model system examined. In addition, other benefits include SOFTmax PRO software that makes it simple to set up the instrument and analyze the data. Moreover, the dual monochromators provide increased flexibility for assay development or basic research purposes. In conclusion, FlexStation provides an easy-to-use, versatile tool to help basic research and assay development laboratories reach their goals.

For more detailed information, please refer to the application note “Comparison of FLIPR® and FlexStation® Systems for Calcium Mobilization Assays”, available for download from Molecular Devices’ web site at: www.moleculardevices.com/pages/flex_lit1.html

Check our web site for a current listing of our worldwide distributors.
www.moleculardevices.com

FOR RESEARCH USE ONLY. NOT FOR USE IN DIAGNOSTIC PROCEDURES.

The trademarks used herein are the property of Molecular Devices, Inc. or their respective owners.

Specifications subject to change without notice.