Bacterial resistance to ß-lactam drugs through the production of class A ß-lactamase enzymes is an increasing concern in the medical community.1 ß-lactamase inhibitory protein (BLIP) produced by the soil bacterium Streptomyces clavuligeris inhibits a number of class A ß-lactamases with a wide range of affinities, thereby restoring the effectiveness of life-saving antibiotics.2 BLIP’s known binding partners include Escherichia coli TEM-1, Serratia marcescens SME-1, Bacillus anthracis BlaI (nanomolar affinity for all three), Klebsiella pneumonia SHV-1 (micromolar affinity), and Proteus vulgaris K1 (picomolar affinity).(2-4) In spite of their ubiquity in biological systems, few rules governing the biochemical basis of affinity and specificity for protein interactions exist. What interactions are sufficient and necessary for successful inhibition? Insight into BLIP’s ability to recognize and inhibit a wide range of enzymes has immediate implications towards the development of novel therapeutics. Mutagenesis data is invaluable for gaining this insight.

A high-throughput method for determining binding affinities for targeted mutagenesis experiments greatly aids our investigations. Also important is the ability to use a small sample volume, which reduces usage of reagents such as protein and substrates. This is especially important in cases where protein is precious. For example, for low affinity mutants, the amount of inhibitor required is much higher than the amount needed to obtain the same response with tight-binding inhibitors.

The FlexStation® 3 System from Molecular Devices is a multi-mode microplate reader with fluidics module. The fluidics module is equipped with a multi-channel pipetter that transfers reagents from a source plate to an assay plate. (See Figure 1.) The microplate is read from the bottom, enabling a simultaneous “add and read” function which allows fast kinetic assay data to be collected as reagents are added to the assay plate. The pipetter comes in an 8- or 16-channel format that is compatible with 96- or 384-well plates respectively. In this “Flex” mode, one column is assayed at a time. This format allows the throughput to increase up to eight or 16 times compared to injector-based systems where only one well can be assessed at a time. The pipetter transfers reagents from compound plate wells to assay plate wells, avoiding cross contamination of reagents. The system does not require priming, thereby minimizing loss of precious compounds. 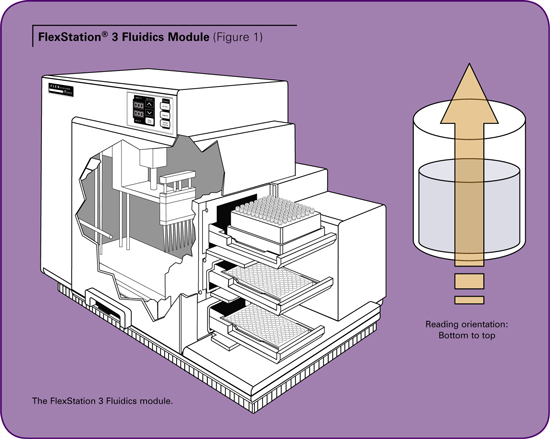 In this assay, TEM-1 is mixed with BLIP in the assay plate and the reaction is initiated by addition of the colorimetric substrate, nitrocefin, with the pipetter. The reaction proceeds immediately. The kinetic rate of the reaction is monitored by measuring the absorbance at 486 nm for three minutes. The initial rate of the reaction is used for calculating the binding affinity. The FlexStation® 3 system facilitates this measurement in real time. Absorbance is a trans phenomenon that requires the source of light and the read head to be on the opposite side of the sample. (See Figure 1.) To avoid conflict between read head and the pipetter, the read head takes the initial baseline readings and moves aside. The pipetter then moves in to perform the additions and moves away after the dispense action is completed. The read head then resumes the reading.

Here we report the use of the FlexStation 3 system in determining the binding affinity of BLIP to TEM-1 (0.96 ± 0.08 nM) with similar results as obtained with other methods reported in the literature, which range from 0.2 to 2 nM.(2, 5-7)

TEM-1 was cloned into pET-24a(+) (Novagen) behind an OmpA secretion signal; BLIP, including the native secretion signal, was cloned into pET-26b(+) (Novagen). Both proteins were expressed in Escherichia coli BL21(DE3) (Stratagene) with IPTG induction for three hours. The periplasmic fractions, harvested by osmotic shock, were further purified by anion exchange chromatography, DEAE-Sepharose for TEM-1 and Q-Sepharose for BLIP (GE Healthcare) followed by size exclusion chromatography with a Superdex75 column (GE Healthcare).

The appropriate amounts of TEM-1, BLIP, and BSA, were mixed in a total volume of 90 µL of PBS in triplicate in a 96-well plate and incubated, covered, for two hours. The reaction was initiated, using the Flex read type, upon the addition of 10 µL of 10X nitrocefin for a final substrate concentration of 121 µM.

The instrument was set to Flex read type to measure absorbance of the reaction mixture. 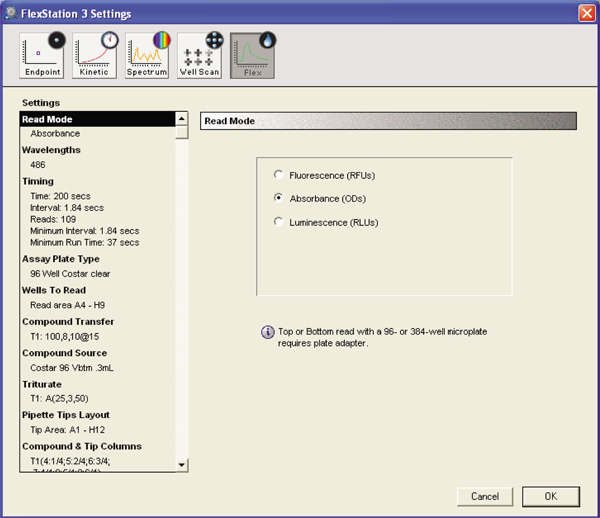 Each column was read for 200 seconds as the read head moved from Well A to H and back to A for the next reading. The minimum time interval between two reads in a well was 1.84 seconds.

The initial volume containing TEM-1 and BLIP was 90 µL. 10 µL of nitrocefin substrate was added with the pipetter at a height of 100 µL to avoid contact between the tip and the fluid in the well. 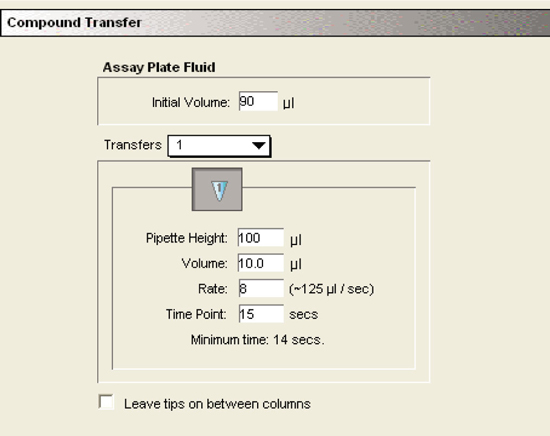 Separate tips were used for dispensing the substrate to different columns of the assay plate. The substrate was picked up from a single column of the compound plate. Flexibility of choosing tip and compound columns allowed efficient and economic use of the tips and compounds.

The initial rate of reaction was calculated by selecting “VMax” as the kinetic reduction option. It was further restricted to the linear phase of the hydrolysis reaction by selecting the appropriate time interval between 30 and 45 seconds. 2 nM TEM-1, BLIP (0–64 nM) and 100 µg/mL BSA were mixed in a total volume of 90 µL of PBS in triplicate in a 96-well plate and incubated, covered, for two hours. The reaction was initiated with Flex read type upon the addition of 10 µL of 10X nitrocefin for a final substrate concentration of 121 µM. A single column was assessed at a time. Figure 3 shows the results from Column 6. 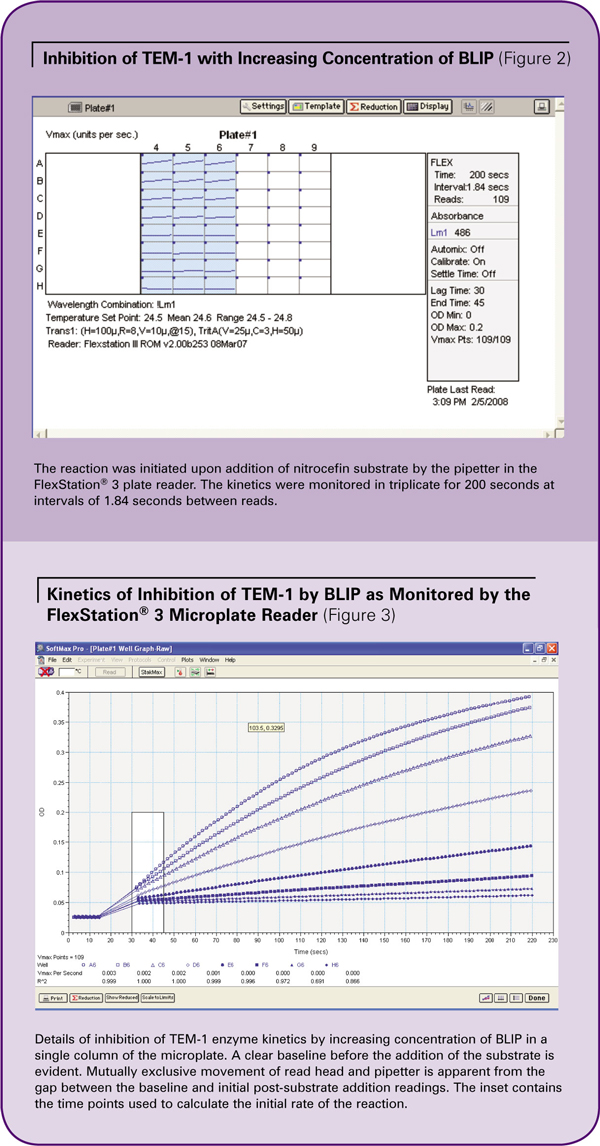 Wells A6 to H6 contained 0, 1, 2, 4, 8, 16, 32, and 64 nM of BLIP. The reaction was observed in real time. The baseline was recorded before the addition of substrate. The gap reflects the movement of the read head away from the plate and the dispensing of the substrate by the pipetter. After substrate was dispensed, the read head returned to its original position and continued to detect the reaction. 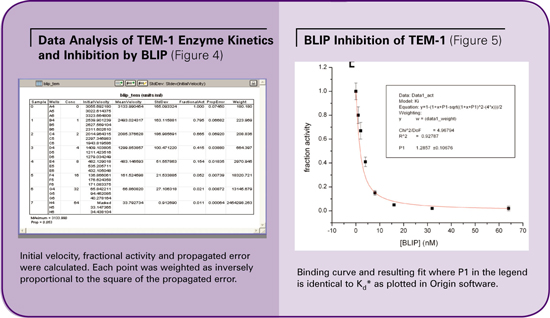 Inhibition of TEM-1 with increasing concentrations of BLIP was apparent. The initial rate of reaction was calculated between 30 and 45 seconds, as indicated by the highlighted portion of the kinetic traces in Figure 3.

The initial rates of the reactions were calculated by SoftMax® Pro software based on the slope of the curve in the linear phase of hydrolysis (VMax units/sec. in Figure 3). The average velocity and standard deviation were calculated. Fractional activity was calculated by normalizing to sample containing no inhibitor. (See Figure 4.)

The binding affinity of BLIP to TEM-1 was determined to be 0.96 ± 0.08 nM, in agreement with literature values ranging from 0.2 to 2 nM, as performed with a variety of other methods. (See Figure 5.)

The use of the FlexStation® 3 multi-mode microplate reader has been shown to compare favorably to other methods in obtaining quantitative binding affinities between the ß-lactamase and inhibitor protein, TEM-1 and BLIP. The FlexStation 3 system provides a high-throughput platform for studying multiple mutants and inhibitors in real time with economical use of precious reagents and biological materials.