Calcium (Ca2+) is the most common signal transduction element in cells ranging from bacteria to specialized neurons. Measurement of changes in the concentration of intracellular cations, for example Ca2+, is important in understanding the mechanisms of many cellular processes.1 A range of events such as receptor-ligand interactions mediate the elevation of intracellular calcium ([Ca2+] i ) levels from ~100 nM to ~1 µM, this can trigger a number of events including the release of synaptic transmitters, muscle contraction, hormone secretion, cell movements or apoptosis.

The FlexStation 3 reader incorporates a tunable Xenon-lamp based light source and dual scanning monochromators that permit the use of dual-wavelength dyes for functional cellular assays. Although visible, light-excitable Ca2+ indicators offer benefits such as reduced interference from sample auto fluorescence and higher absorbance by the dye (permitting the use of lower dye concentrations), ratiometric dyes offer several advantages over conventional single-wavelength indicators. Benefits of using the 340/380 nm excitation ratios for Fura-2:

An alternative approach is a series of ‘no-wash’ reagents available from Molecular Devices, such as the FLIPR Calcium Assay Kit. These too confer a number of potential advantages over conventional Ca2+ indicators. ‘No-wash’ reagents may reduce these problems in a conventional assay protocol:

In this application note we demonstrate the use of both single-wavelength and dual-wavelength Ca2+ indicators in the FlexStation 3 reader and the possible benefits of a homogeneous assay system.

CHO-K1 cells contain endogenous nucleotide receptors (P2Y2)3,4 that are linked to activation of phospholipase C, generation of inositol phosphates (IPs), activation of protein kinase C (PKC) and release of intracellular Ca2+ stores.5 Purinoceptors are expressed in the vast majority of cells and tissues, where they control a wide range of physiological processes and are subdivided into two families, P2X and P2Y receptors. P2X receptors are ATP-gated ion channels, whereas P2Y receptors belong to the superfamily of GPCRs. The P2Y family of receptors includes the P2Y1 , P2Y2, P2Y4 , P2Y6, P2Y11, P2Y12, P2Y13 and P2Y14 receptor.6 The P2Y subtypes differ pharmacologically in their selectivity for adenine and uracil nucleotides and the principal physiological ligands for the P2Y2- receptor are UTP and ATP.7 One important functional role of the P2Y2-receptor is the control of chloride ion fluxes in airway epithelia and mucociliary clearance in the lung, and thus may play a role in cystic fibrosis and other airway disorders.

Novel ligands targeting P2Y-receptors represent potential therapeutic agents and the ability to screen such compounds reliably and reproducibly has been demonstrated using the FlexStation 3 reader.

Wash buffer: this buffer contains a final concentration of 1X HBSS and 20 mM HEPES diluted in sterile d.H2O. Important: To prevent dye extrusion by the anion exchange protein, the loading medium was supplemented with 2.5 mM probenecid.

Prepare a fresh stock of 250 mM Probenecid as above.

CHO cells were seeded into black walled, clear-base 96-well plates (Costar) at a density of ~30,000 cells per well in Hams-F12 medium, supplemented as above and cultured overnight. The cells were then incubated with the appropriate calcium indicator; Fluo-3, Fura-2 or FLIPR Calcium Assay Kit; and 2.5 mM probenecid at 37ºC for 60 minutes (see appendix).

The cells loaded with Fluo-3 or Fura-2 were washed manually (BioHit 8-channel pipette) three times with Hanks BSS medium containing 2.5 mM probenecid, cells loaded with the FLIPR Calcium Assay Kit did not require this wash step (see Figure 2.). The final volume in each well was 200 µL. 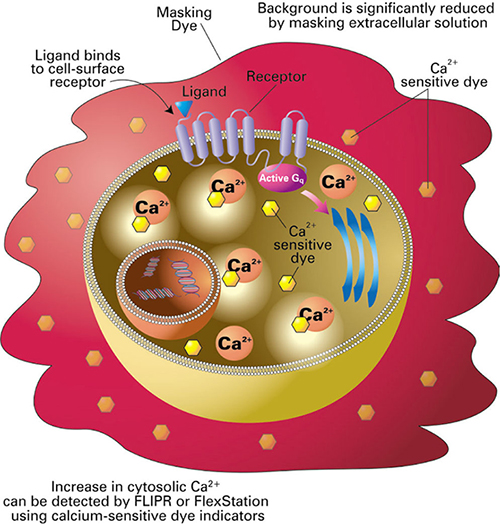 Figure 2. Principle of the FLIPR calcium assay. The FLIPR Calcium Assay Kits include a calciumsensitive dye that is taken into the cytoplasm of the cell during the incubation period. The cellimpermeant masking dye remains outside the cell and blocks background fluorescence. Upon ligand binding to the receptor, calcium is released into the cytoplasm of the cell. The dye binds to the intracellular calcium and an increase in fluorescence is measured.

The cell plates were then placed into the FlexStation 3 reader to monitor fluorescence before and after the addition of ATP (50 µL addition, ATP made at 5X final concentration, final concentrations 30 nm– 30 µM). Experimental parameters are shown following: 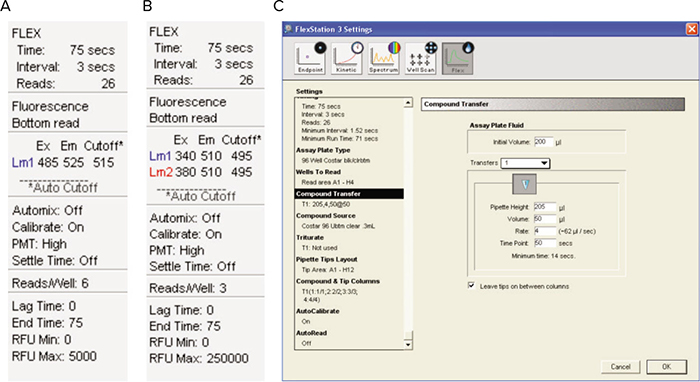 Figure 3. SoftMax® Pro Software settings. Experimental parameters for (A) Single-Wavelength dyes only, (B) Fura-2 only and (C) All three dyes.

Individual sets of E/[A] curve data were fitted to a four-parameter logistic of the form:

where a, b, EC50 and n are the asymptote, bottom of curve, location (expressed as -log10 EC50 ) and slope parameters respectively. All curvefitting routines were carried out using GraphPad Prism 3.0 (GraphPad Software Inc.).

One-way Analysis of Variance (ANOVA) indicated that the EC50 estimates were not significantly different from one another (P value = 0.62). 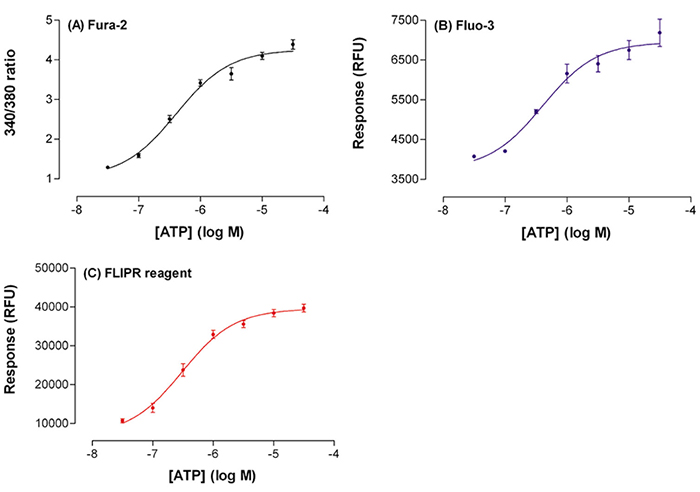 Figure 4. ATP increase with fluorescent signal. Plot of ATP concentration (x-axis) against the increase in fluorescent signal (y-axis) for cells loaded with Fluo-3 (B) and FLIPR Calcium Assay Kit (C), or the 340/380 nm excitation ratio (A) for Fura-2. The Fura-2 ratios were calculated from timeinterpolated data within SoftMax Pro Software. Data is mean ± s.e. mean.

The screening coefficient window (Z’ factor), which reflects the dynamic range of the signal and the data variation for the assay8 was calculated using the buffer addition (negative control) and the 30 µM ATP addition data (positive control). Z´ factor obtained with Fura-2 and the FLIPR Calcium Assay Kit were 0.60 and 0.68 respectively (Table 1). This shows a large separation band between the negative and positive controls and a reproducible, high quality assays. The Z’ factor obtained for the Fluo-3 data was 0.28 representing a ‘useable’ assay, this probably reflects the less than optimal assay protocol and subsequent small dynamic range of the assay.

In this study ATP caused a concentrationdependent increase in [Ca2+] i in CHO cells endogenously expressing the P2Y2-receptor, with a potency similar to that reported previously. Furthermore, we have demonstrated that the FlexStation 3 reader can be used to generate reliable, reproducible data for calcium mobilization assays used to monitor such Gq -coupled GPCRs.

The EC50 estimates for ATP were similar whether the fluorescent dye Fluo- 3 (6.39) or Fura-2 (6.44) or the FLIPR Calcium Assay Kit (6.51) was used, and were consistent between assay plates on the same day as well as between assays analysed on different days (less than 0.6 log unit differences). However, there were significant differences in the dynamic ranges from the three different loading protocols, which is reflected in the corresponding Z’ factors. Less than a two-fold increase in signal above basal was observed when the cells were loaded with Fluo-3, the most likely cause is the subsequent wash steps in the protocol reducing cell responsiveness. Using cells of a lower passage number and a dedicated cell-washer (AquaMax® Washer or similar) would probably have improved the Z’ factor for Fluo-3 loaded cells. Under these experimental conditions, a five-fold increase in signal was observed with Fura-2 despite the cells undergoing a number of wash steps. This could be attributed to the beneficial ratiometric properties of the dye. The biggest fold increase in signal, and thus Z’ factor, was observed with the FLIPR Calcium Assay Kit indicating that this ‘no-wash’ homogeneous assay can lead to stronger signals, higher assay precision and improved physiological data.

The FlexStation 3 reader provides an easyto-use, versatile tool for pharmacological and drug screening laboratories and has proven to be suitable for kinetic, cellbased fluorometric assays such as the measurement of intracellular calcium, membrane potential, and intracellular pH.

Although the Molecular Devices homogeneous assay kits have been proven to achieve the same goal and with fewer steps in the assay, the FlexStation 3 reader benefits from the ability to use ratiometric dyes to help improve data fidelity.