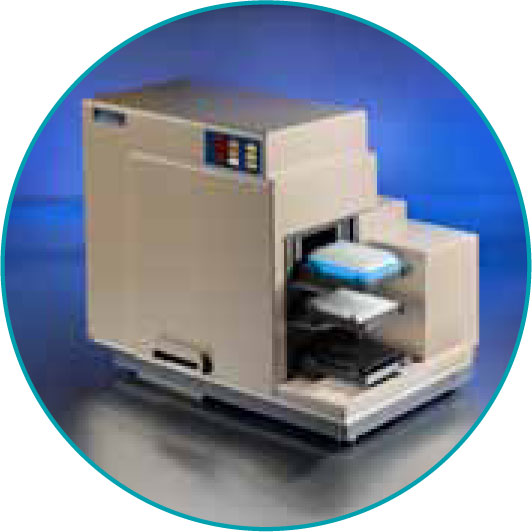 Central nervous system (CNS) disorders affect many people worldwide. To increase the quality and number of drugs available for treatments of CNS disorders such as Alzheimer’s disease, schizophrenia and anxiety, the success rate of CNS drug discovery programs must be improved. The challenge in drug discovery is to develop more relevant assay systems to identify lead compounds for further development. Cell-based screening assays currently used for CNS drug discovery and development involve primary cells or commercially available cell lines, both of which have many disadvantages.

Undifferentiated hESCs were seeded in neuronal inducing media containing Noggin and bFGF. Cells were maintained in culture for approximately three weeks, after which cells began to differentiate towards the neuronal lineage. This is evident from the induction of pax6 and nestin (Figure 1), which are markers associated with neuroprogenitors (NPs). Further neuronal maturation was achieved by withdrawal of bFGF and seeding at low cell density. Neuronal cells were identified by expression of MAP-2, beta-tubulin III, and PSA-NCAM. It was also shown that these neuronal cells express Gad 65/67, which is indicative of a GABAergic phenotype. (Figure 2) These neuronal cells were seeded into 96-well plates for analysis on the FlexStation® 3 Microplate Reader, or onto 10-mm coverslips for electrophysiology.

Whole-cell patch-clamp recordings were made from neuroprogenitors and mature neurons. Both types of cells exhibited the presence of potassium outward currents. However, only matured neurons exhibited inward sodium current, sensitive to tetrodotoxin (TTX) at 100 nM. (See Figure 3A.) The inward current generally coexisted with the outward current, with both currents displaying typical voltage dependence properties. (See Figure 3B.) Matured neurons developed typical wholecell currents in response to application of Glutamate (100 μM) and GABA (1 mM) (Figure 4A) and displayed spontaneous firing activity. (Figure 4B) No such activity was observed in neuroprogenitor cells. Under current-clamp, cells were stimulated to elicit action potentials. Most of the matured neurons were able to fire overshooting action potentials (Figure 5A), consistent with the presence of sodium channels in this group of cells. However, no action potentials could be generated or recorded in neuroprogenitors stem cells. (Figure 5B) 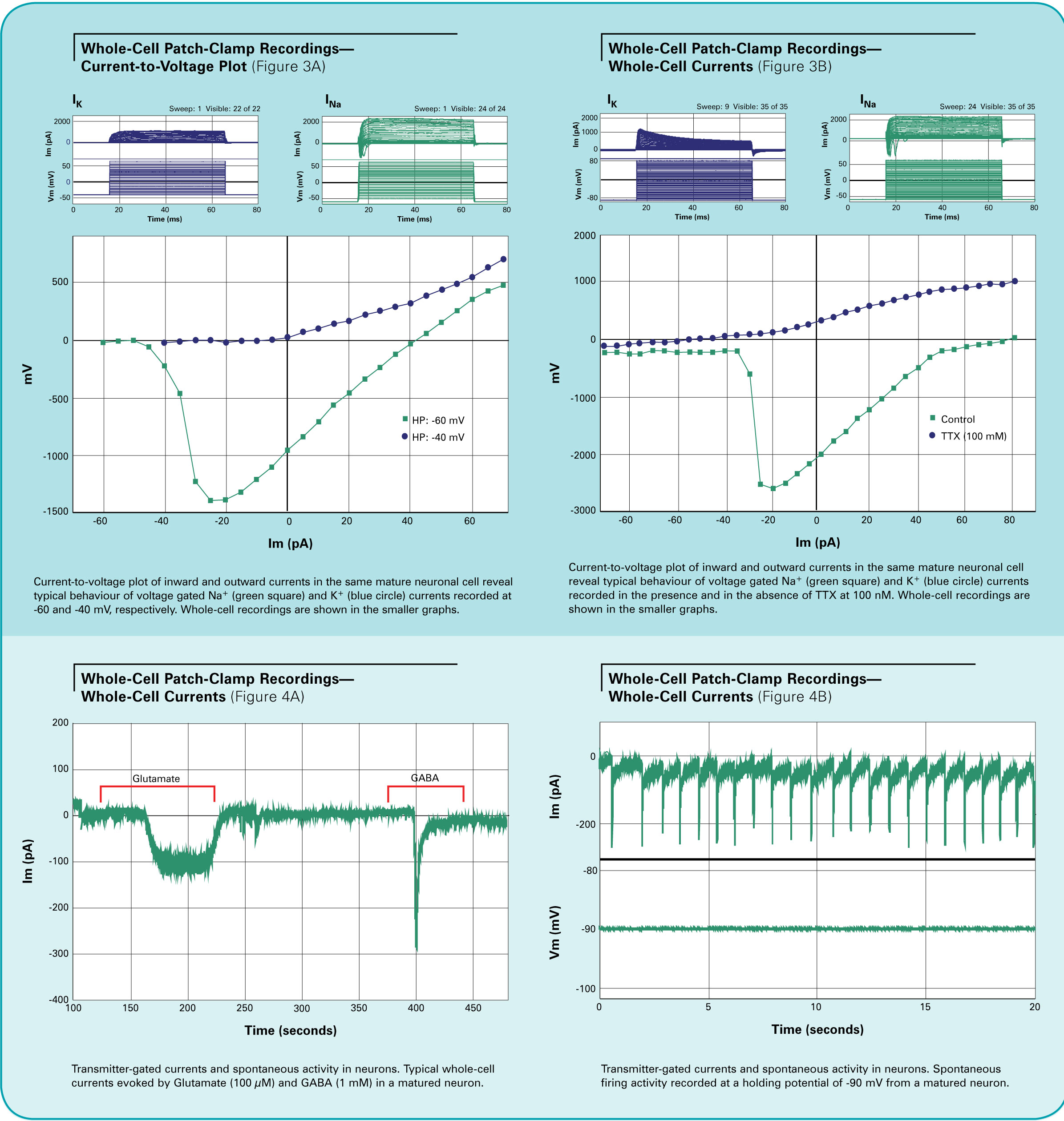 In this study, we show a calcium mobilization assay that can be used to screen candidate targets in a natural endogenous system. The results demonstrate that high quality data and assay performance can be obtained with the FLIPR Calcium 4 Assay and that this is comparable to other similar assay systems. In the present study, we verified this assay using selective antagonists against a HEK cell line overexpressing a GPCR target, and neurons (generated as above) endogenously expressing the same target. (Figures 6 and 7) Both the overexpressing stable cell line and the neurons endogenously expressing the GPCR target showed similar inhibitor profiles and selectivity. This would indicate the neuronal cell line as a good model to profile the GPCR target in its natural environment. 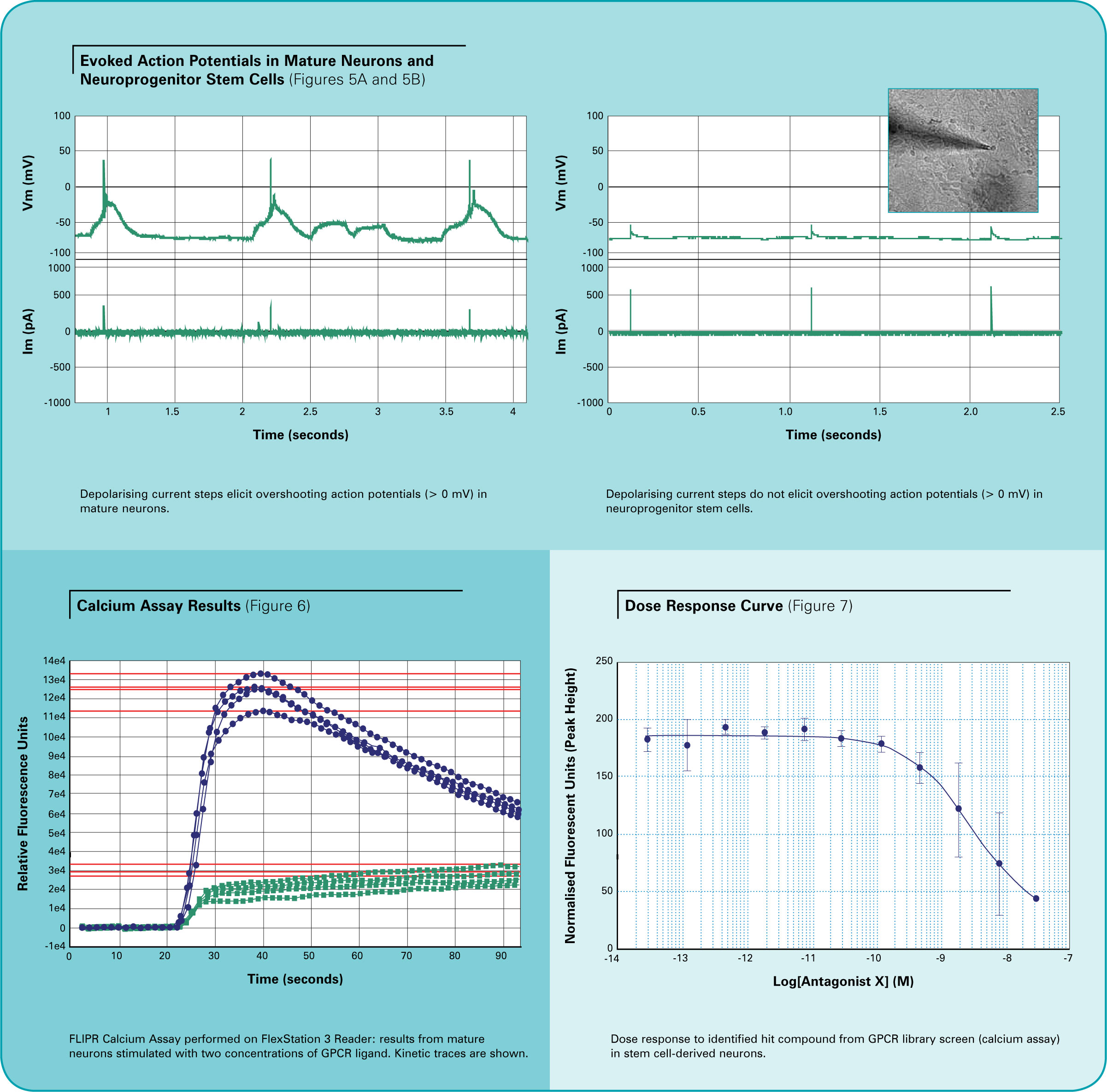 We have generated reproducible batches of human neurons that will significantly impact and improve CNS drug discovery. The stem cell-derived neurons express all known markers typically associated with mature neurons and are functionally active. They express typical sodium (TTX-sensitive) and potassium currents and respond to saturating concentrations of the neurotransmitters GABA and glutamate. Furthermore, these cells have the ability to fire overshooting action potentials.

We are able to format the neurons for screening purposes and can measure calcium and membrane potential responses upon stimulation. We have ascertained an expression profile of transporters and receptors endogenously expressed in the neurons and are able to manipulate them to overexpress proteins of interest. This enables us to further enhance the superior screening systems that we can build, based around multiple CNS-related targets.

We have used these neurons in a recent screen to identify antagonists of a novel GPCR target implicated in schizophrenia. The neurons were shown to express this GPCR in high levels, and we generated a stable cell line overexpressing the GPCR for a comparitive study. We identified hit compounds from a focused library screen by measuring calcium responses. We found that the neurons gave us increased data content over the stable cell lines, which was proven to be data necessary for the successful outcome of the project.