Live cell research is increasingly in need of employing complementary data acquisition simultaneously to describe intracellular processes. Simultaneous recordings with both imaging and electrophysiology techniques provide valuable correlation between both types of data, and have been widely used to examine a variety of cellular responses. However, it is a challenging task to synchronize both programs in the experimental workflows in some laboratories. Both Axon™ pCLAMP™ Electrophysiology Data Acquisition and Analysis Software and MetaMorph® Microscopy Automation and Image Analysis Software from Molecular Devices® are sophisticated, powerful programs for electrophysiology and imaging, respectively. The purpose of this highlight is to provide an easy solution to synchronize both pCLAMP and MetaMorph Software programs to acquire high resolution electrophysiology and imaging data.

The Axon™ Digidata® 1440A Data Acquisition System, driven by the pCLAMP Software, contains eight digital outputs on its front panel. Connect the camera's external triggering cable to any of these eight digital outputs, then connect the remaining cable to the trigger input port on the CCD camera (Figure 1). The cable and input port may look different from Figure 1, depending on the camera system used. 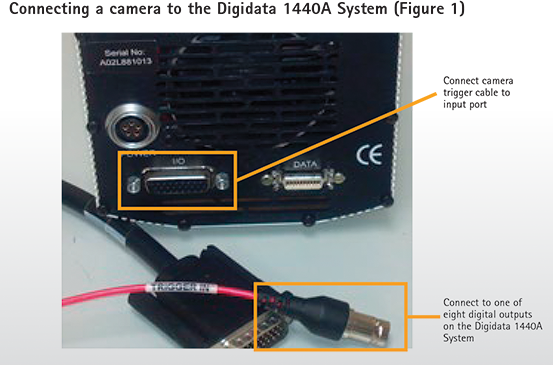 Step 1. In the Clampex 10 Module, select the Edit Protocol menu item and open the Waveform tab (or Wave #0/Wave #1 tab in earlier versions of the Clampex Module)

Step 2. Check the box “Digital Outputs” in the upper right corner. Notice two rows “Digital bit pattern” in the Waveform table are now enabled, corresponding to eight available digital outputs from Digidata 1440A System with Clampex 10 Module. With previous versions of the Clampex Module, only a single row is enabled as only four digital outputs (0 to 3) can be controlled.

To configure MetaMorph Software to acquire a set number of images after a single pulse is sent from pCLAMP Software, first open the Acquire dialog and set the exposure time and gain settings needed for the desired intensity level for sample. Next open the Stream Acquisition dialog and configure the number of frames to acquire in the Acquire tab of the dialog (Figure 3). 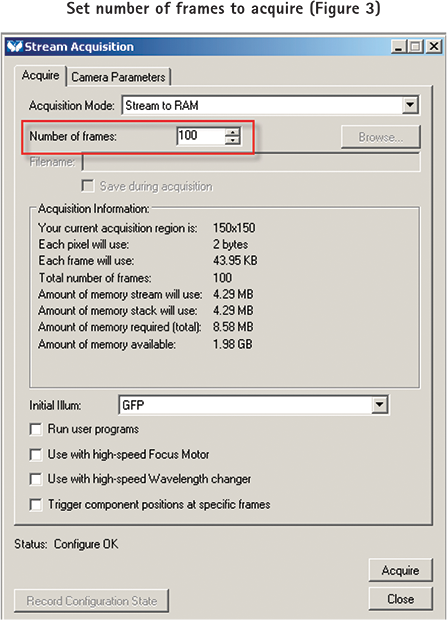 Select the Camera Parameters tab then set the Acquisition mode to “Acquire images from the first external trigger” (Figure 4). 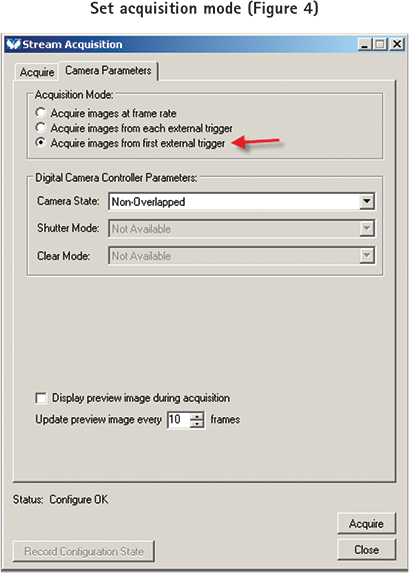 To generate a train pulse of digital outputs, first configure the digital bit pattern as “000*”, where a “*” denotes a train pulse of 5 V. In Figure 5, a train of 5 V TLL pulse set to trigger the camera (in 10 Hz from digital output #0) is synchronized with a train 100 mV voltage step in 10 Hz that is applied to the cell.

To configure MetaMorph Software to acquire a set number of images at the train pulse rate configured in pCLAMP Software, first open the Acquire dialog and set the exposure time and gain settings needed for the desired intensity level for sample. Next configure the number of frames to acquire in the Acquire tab of the Stream dialog (Figure 6). 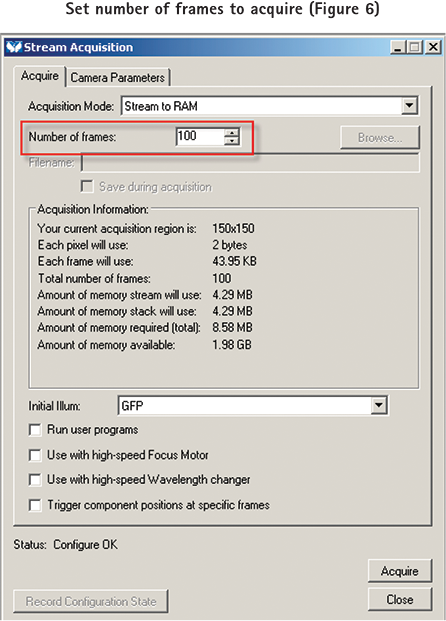 Select the Camera Parameters tab then set the he Acquisition mode to “Acquire images from each external trigger” (Figure 7). 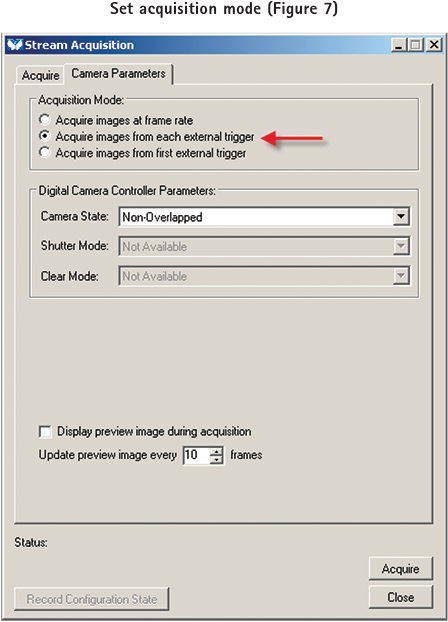 A new image will be acquired as each pulse is received. To guarantee the acquisition rate will match the pulse rate (Train Rate in pCLAMP Software), the pulse rate needs to be set longer than the Exposure or Readout time of the camera, or the sum of the Exposure and Readout time of the camera depending on the Camera State selected on either the Camera Parameters tab of the Stream dialog, or the Special tab of the Acquire dialog (Overlapped and Non-Overlapped, respectively) (Figure 8).

If the next train pulse from pCLAMP Software is received before the camera has finished the previous acquisition, it will be ignored and the acquisition will happen on the next pulse. Acquisitions will continue at train rate until the number of frames specified in the Stream dialog has been reached.

In a recent study, Dr. Steve Goldstein and colleagues from University of Chicago demonstrated that small ubiquitin-like modifier proteins (SUMOs) modification alters membrane excitability of rat hippocampal neurons through regulation of potassium Kv2.1 channels (Plant et al., 2011). Both electrophysiology and imaging approaches were used in this study. First, the electrophysiological responses of hippocampal neurons in culture to intracellular application of wild-type SUMO1101 were accessed. The membrane excitability of a neuron was accessed by measuring the resting membrane potential and the firing rate of evoked action potential under current clamp condition. Kv2.1 current was accessed under whole-cell voltage clamp mode in the CHO cells that transiently expressed Kv2.1 potassium channels. Sumoylation of native Kv2.1 channels by endogenous SUMO2/3 was observed by fluorescence resonance energy transfer (FRET) microscopy both within and outside characteristic Kv2.1 clusters in the soma and proximal dendrites.

Rat hippocampal neurons exposed via the pipette to SUMO1101 and assessed for resting membrane potential and firing rate of evoked action potential (with 2-s current injections of 10 pA) in whole cell mode. Bars in A are 50 mV and 1 sec. A: Photomicrograph of a neuron (left); bar, 20 µm. Evoked action potentials under baseline conditions (right). B: Action potential firing increases in frequency with 7 pM SUMO1101 in the pipette (left) and is increased further with 75 pM SUMO1101 (right). Whole-cell current-clamp recording was performed using Axon pCLAMP Software and an Axon™ Axopatch™ 200B Amplifier. ©Plant et al., 2011. Originally published in The Journal of General Physiology. 137:441-454. 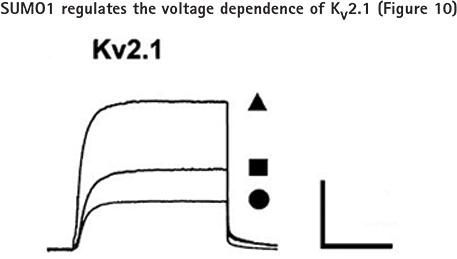 In addition to imaging physiological and morphometric changes of the patched cell during pulsing set by pCLAMP Software, MetaMorph Software can be used to capture other information within the cell, like protein-protein interaction through colocalization (Figure 11).