As shown in Figure 1, the FLIPR Calcium 6 assay dye enters the cytosol of the cell. The masking technology does not enter the cell but significantly reduces background fluorescence originating from residual extracellular calcium indicator, media, and other components. The FLIPR Calcium 6-QF Assay Kit formulation contains no masking technology and delivers a new, flexible option for quench sensitive targets or multiplexing applications. Additional assay flexibility is provided with minimal to no requirement for use of probenecid in the assays. Certain cells such as Chinese Hamster Ovary (CHO) cell lines have an anion-exchange protein that requires the use of an anion reuptake inhibitor, such as probenecid, to retain commonly used calcium indicators within the cytosol. The unique FLIPR Calcium6 Assay Kit dye formulation is more resistant to such organic anion transporters, thus less or no probenecid may be required.

Figure 1. Assay flexibility with or without masking technology.

An assay examining the endogenous histamine receptor expressed in HeLa cells was developed using the new FLIPR Calcium 6 and Calcium 6-QF Assay Kits, and then compared to other commercially available kits. Calcium flux was measured with the FlexStation 3reader using the ‘Flex’ read mode. HeLa cells kept in continual culture were plated at 5,000 cells/well in 50 µL growth media in blackwall, clear bottom 384-well microplates and then maintained overnight at 37°C, 95% humidity, and 5% CO2. On the following day, cell plates were loaded with the appropriate calcium kit reagents following manufacturers’ recommendations (including water soluble probenecid) and incubated for 60 or 120 minutes according to manufacturer protocol.

The cells were challenged with varying concentrations of histamine (starting at 100 µM, in 3-fold dilutions) using the FlexStation 3 reader’s integrated 16-channel pipettor. Fluorescence measurements were taken for 60 seconds before, during, and after compound addition using optimized parameters (Table 1.) For the antagonist studies, pyrilamine and risperidone (starting at 30 µM, in 3-fold dilutions) were added using the FlexStation 3 reader’s on-board fluidic system and allowed to equilibrate for 30 minutes. The cells were then stimulated with 15 µL/well of histamine (EC80concentration) while changes in fluorescence intensity were monitored in real time.

The calcium indicators used for the comparison were:

Cell plates were maintained at 37°C inside the FlexStation 3 reader. Compounds were prepared in Greiner 384-well polystyrene deep-well plates and FlexStation 3 Tips (black) were used for compound transfer. The specific parameters are indicated in Table 1.

Responses were measured as peak fluorescence intensity. To enable comparison, data was normalized as % response over baseline and expressed as mean ± standard deviation with n=4. Individual sets of concentration-response data were fitted to a four-parameter curve using SoftMax®Pro Software (Figures 2-5). 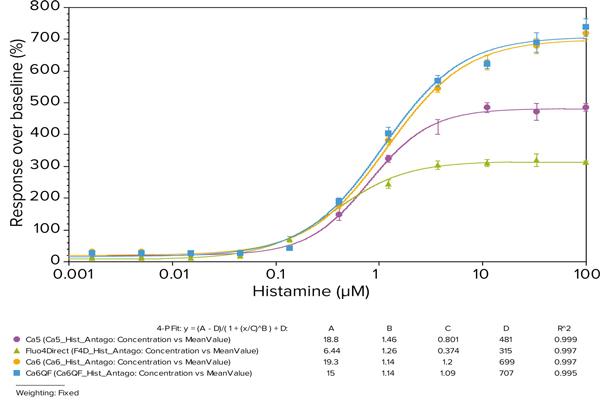 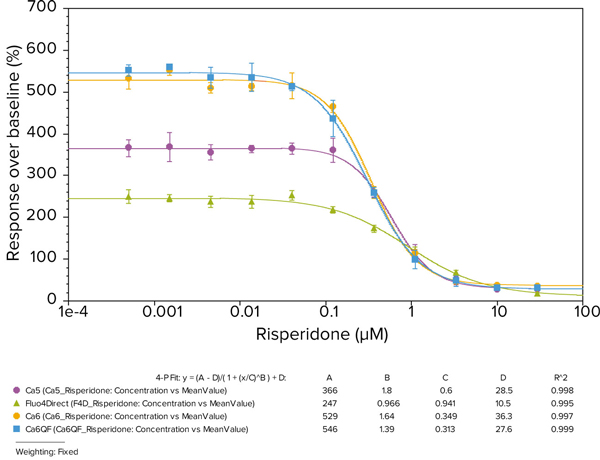 Figure 3. Risperidone antagonist response to histamine challenge in HeLa cells. Risperidone is an antipsychotic drug used to treat schizophrenia. It is a dopamine antagonist that also has antihistamine properties. The signal from both Calcium 6 and 6-QF dyes provides the largest window for the antagonist assay. IC50values are within one-half log of each other and Calcium 6-QF has the highest Z factor at IC50concentration. 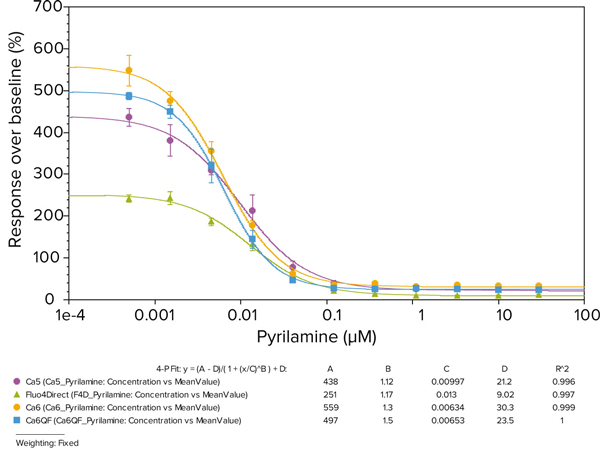 Figure 4. Pyrilamine antagonist response to histamine challenge in HeLa cells.Pyrilamine is a first generation Histamine H1 antagonist. Because of the larger signal window provided by the FLIPR Calcium 6 Assay Kit, the Z factor at IC50is the largest. In addition, the Calcium 6-QF kit also provides a robust assay that does not require washing when quench sensitive targets are to be studied. 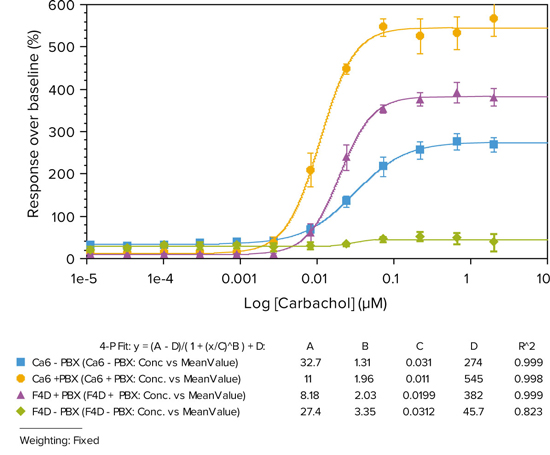 Figure 5. FLIPR Calcium 6 assay dye does not require use of anion reuptake inhibitors. Assay performed with CHO-M1 cells and Calcium 6 dye demonstrates a response to carbachol without the need for incubation with probenecid. The corresponding assay with Fluo-4 Direct shows virtually no signal. Calcium 6 dye is an important new development for understanding targets that may be sensitive to anion reuptake inhibitors.

The FLIPR Calcium 6-QF Assay Kit option without quench provides new assay flexibility to enable assays for studying quench sensitive targets. Lastly, the ability to study target behavior in cell lines such as CHO cells in the absence of an anion reuptake inhibitor can be beneficial as some receptors and ion channelsmay be probenecid sensitive and its use may alter the natural biological mechanisms. The larger signal window provided by FLIPR Calcium 6 Kits delivers a robust assay for compound screening and optimization utilizing these challenging targets and cell lines.