G-protein coupled receptors (GPCRs) represent one of the most important therapeutic targets in drug discovery research. GPCRs are membrane-localized proteins that play a pivotal role in cell signalling and the regulation of various physiological functions. When a GPCR is activated by a ligand, the conformation of the receptor is modified, activating G-proteins inside the cell. An active G-protein has the potential to induce various cascades of intracellular messengers including calcium. Cell-based assays are an indispensable method for screening and compound profiling in the early drug discovery process. Calcium flux assay using the FLIPR® Tetra High Throughput Screening System from Molecular Devices, Inc. is one of the main assays for Gq-coupled GPCR targets.

Activated GPCRs are turned off by a process known as desensitization, which is the result of phosphorylation of the active receptor by specific kinases (GRKs) and the subsequent binding of arrestin proteins to the phosphorylated receptors. Arrestins binding to the activated receptors also starts the process by which responsiveness is re-initiated (resensitization). The ability to assay for ß-arrestin binding following GPCR activation not only provides researchers with a measure of GPCR signalling independent of second messenger pathways, but it could potentially offer a means to measure the activation of most GPCRs regardless of subtype, including orphan receptors. 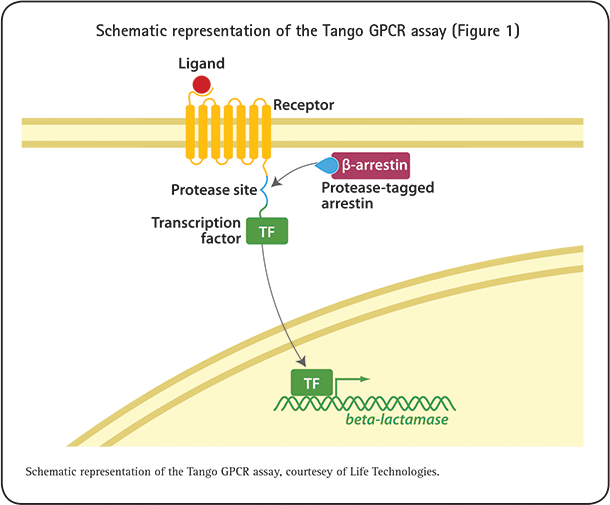 This subsequent activation of ß-lactamase expression generates a quantifiable measurement of the degree of interaction between the target receptor and the proteasetagged arrestin partner. The Tango GPCR Assay utilises an engineered fluorescent substrate containing two fluorophores: coumarin and fluorescein. In the absence of ß-lactamase, the substrate molecule remains intact and in this condition excitation of the coumarin results in fluorescence resonance energy transfer (FRET) to the fluorescein moiety and emission of green fluorescence light. When the engineered GPCR in the Tango assay is activated leading to the production of ß-lactamase, this coumarin-fluorescein substrate is cleaved separating the two fluorophores and disturbing the FRET, resulting in a blue fluorescence signal from the coumarin.

Traditionally, the Tango GPCR Assay from Life Technologies has been read using a microplate reader; however, these systems are generally PMT-based and can take 3-5 minutes to read an entire 384-well microplate depending upon the number of flashes from the lamp. The speed is also limited by the number of PMT detectors which can be a limitation to throughput. To improve throughput, we used a FLIPR Tetra System to read the plates. This instrument is an industry-renowned tool for monitoring GPCRs and ion channels and it has, for the Tango assay, the necessary capability to read from underneath the plate. The system provides a reliable and flexible high-throughput screening solution for identifying early leads in the drug discovery process. The Tango GPCR Assay is an endpoint assay and does not require the fluid transfer capabilities of the FLIPR Tetra System, which are critical for fast kinetic assays such as calcium flux or membrane potential assays. However, ScreenWorks® Software working together with the EMCCD camera allows the instrument to read all the wells simultaneously in up to a 1536-well plate and at a much faster rate than a traditional plate reader. In addition, the instrument easily incorporates dual emission ratiometric detection required of FRET assays. This is the primary reason for considering the FLIPR Tetra System in measuring the Tango GPCR Assay. Lastly, the fact that the FLIPR Tetra System can be integrated onto robotic platforms means that there is the potential to combine the Tango GPCR Assay technology and the ability of the FLIPR Tetra System to run uHTS campaigns in 1536-well format. This application protocol provides a basic protocol for performing the Tango GPCR Assay on the FLIPR Tetra System in 384-well and 1536-well format.

Cells were thawed and propagated according to the recommended method specified by the supplier. For cryo preservation cells were scaled up in 10-layer factories (Corning Cat. #3271). At a confluency of 80% the cells were harvested using Accutase, re-suspended in complete medium, counted using a Cedex cell counter (Innovatis) and centrifuged 10 min at 1000 rpm (RT), re-suspended in freeze medium and aliquoted into 1 mL cryogenic vials (Nunc Cat. #374089) at a concentration of 20 x 106 cells/ml, frozen at a rate of 1°C /min and stored at -180°C.

On the day of the assay or the day prior ready-to-use, cryopreserved cells (1 mL) were thawed in a 37°C water bath and added to 9 mL of warm Assay medium (see materials). The cells were then centrifuged for 4 min at 1000 rpm and the cell pellet re-suspended in Assay medium and counted using a Cedex cell counter. Cells were diluted to 2.5 x 105 or 4.5 x 105 cells/mL, as appropriate, in assay medium.

The Tango GPCR Assay was performed as per the manufacturer’s instructions with modifications as described below. The precise volumes of compound, cells and assay reagents for the relevant microplate and assay format can be found in Tables 1 and 2. Cells were used either in an adherent fashion or in suspension as deemed most appropriate during the assay development process. Ideally, our choice is to use cells in suspension because they are easier to work with, save time, reduce microplate consumption and can reduce the risk of carryover and contamination.

A concentration-response series of the appropriate ligand (in DMSO), as well as appropriate controls, was prepared in a 384-well black, clear-bottomed microplates using a LabCyte® Echo 555 liquid handler. The required number of Tango GPCRX bla U2OS cells (Table 1) were then added to the assay plate using a Multidrop® Combi (Thermo Scientific). The assay plate was subsequently incubated at 37°C, 5% CO2 and 95% humidity for 5 hours. Following this incubation step, the Tango Mix containing the coumarin-fluorescein substrate was added using a Multidrop Combi and the assay was incubated at room temperature in the dark for 1.5–2 hours.

For GPCR-Y the required number of Tango GPCR-Y bla U2OS cells (Table 2) were dispensed into 384-well or 1536-well black, clear-bottomed microplates using a Multidrop Combi (Thermo Scientific). The cell plates were then incubated at 37°C, 5% CO2 and 95% humidity for 18 hours.

A concentration-response series of the appropriate ligand (in DMSO), as well as appropriate controls, was prepared in a 384-well or 1536-well clear microplate using a LabCyte Echo 555 liquid handler. This compound plate was then pre-diluted with assay medium using a Multidrop Combi (Thermo Scientific) and transferred to the cell plates using the FLIPR Tetra System. The assay plate (previously called cell plate) was subsequently incubated at 37°C, 5% CO2 and 95% humidity for 5 hours. Following this incubation step, the Tango Mix containing the coumarin-fluorescein substrate was added using a Multidrop Combi or a FLIPR Tetra System followed by incubating the assaymicroplates at room temperature in the dark for 1.5–2 hours.

The required number of Tango GPCR-Y bla U2OS cells (Table 3) were dispensed into 384-well black, clear bottomed microplates using a Multidrop Combi and incubated at 37°C, 5% CO2 and 95% humidity for 18 hours prior to the assay.

A concentration-response series of the appropriate compound (in DMSO), as well as appropriate controls, was dispensed into a 384-well clear microplates using a LabCyte Echo 555 liquid handler. Assay medium was dispensed into the compound plates using a Multidrop Combi. 5µL of the above mix was then transferred to the cell plates using a Biomek NX. The assay plate (previously called cell plate) was then incubated at 37°C, 5% CO2 and 95% humidity for 15 minutes, followed by addition of the appropriate volume of the receptor ligand at EC80 concentration. Next the assay plate was incubated at 37°C, 5% CO2 and 95% humidity for 5 hours. Following this incubation step, the Tango Mix was added using a Multidrop Combi or a FLIPR Tetra System and the assay was incubated at room temperature in the dark for 1.5–2 hours.

After incubation with the Tango Mix, assay plates were placed on the FLIPR Tetra System. Protocols were prepared in ScreenWorks software using the parameters shown in Table 4 and the samples were measured at room temperature. The Ex 390–420 nm/Em 440–480 nm reading measures fluorescence in the blue channel to detect the liberated coumarin and the Ex 390–420 nm/Em 515–575 measures the FRET signal in the green channel.

Fluorescence readings were taken every 1.7 seconds for ~5 seconds. ScreenWorks Software was used to calculate the average RFU of the three readings. The data was exported to a software package internally developed at AstraZeneca, which was used to generate concentration response curves and to calculate the standard deviation, EC50 and Z’-factor.

ß-arrestin interaction at activated GPCRs may be measured using the Tango GPCR assay technology in conjunction with the FLIPR Tetra System. Fluorescence is measured as Relative Light Units (RLU) at two distinct emission wavelengths that correspond to the emission spectra for coumarin and fluorescein. The RLU were measured at three time points and averaged for each of the emission wavelengths and the ratio of Em 460/530 nm was calculated. The ratios (460/530 nm; Blue/ Green) for a number of replicate samples were averaged and plotted against the agonist/antagonist concentration to generate concentration-response curves using a 4-Parameter Logistic Model (Figures 2,3,4) and the calculated EC50/ IC50 value. This study represents n ≥ 3. The EC50/ IC50 is consistent with the literature and that obtained using a microplate reader. 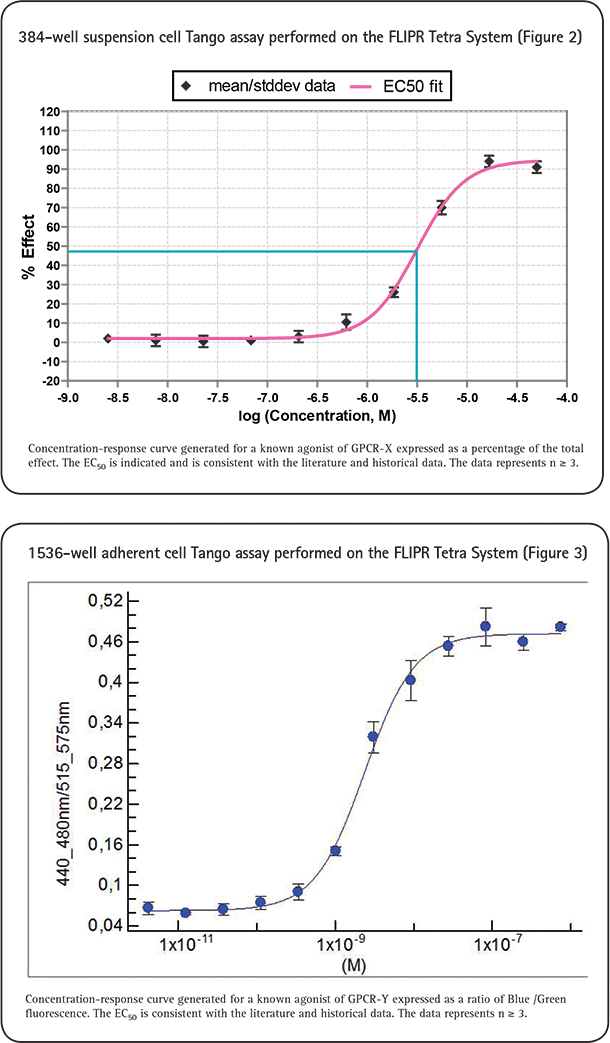 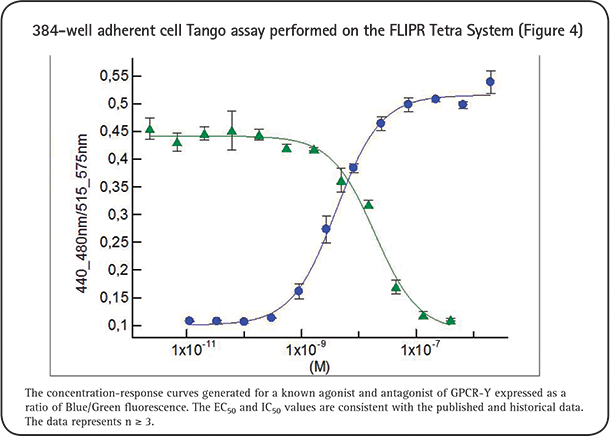 This data was encouraging and supported our decision to use the FLIPR Tetra System to run the Tango assay in a high-throughput format. Figure 5 shows data for a set of 30 plates run in an antagonist screen in 384-well format. 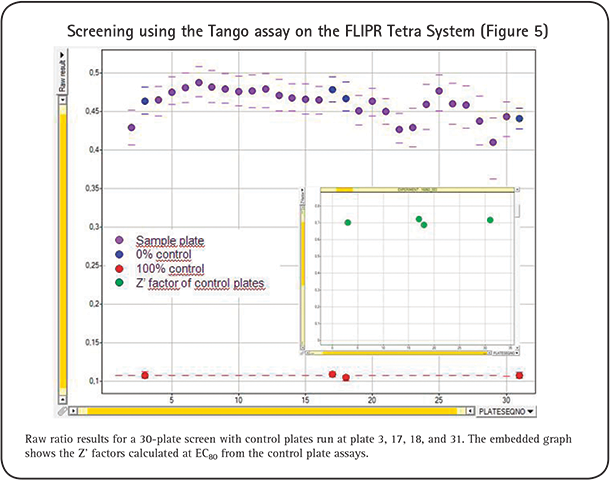 In this study we have demonstrated that the FLIPR Tetra System can be used to measure the Tango GPCR assay with both adherent and suspension cells and in both 384- and 1536-format. The correlation of the data from these experiments with data produced using fluorescence microplate readers supports the use of the FLIPR Tetra System for monitoring Tango assays.

Many thanks to Mariska Van Giezen and Louise Wallin (AstraZeneca LG DECS) for their assistance with preparation of cryo cells. Special thanks to Amalia Ignberg (AstraZeneca, Lead generation) for the work with the GPCR-Y Tango assay. Editorial services provided by Carole Crittenden (Molecular Devices, Inc.)