The discovery and development of novel drugs is a difficult and expensive process due to lack of tools and techniques to accurately reproduce the human physiological response in the laboratory. Off-target cardiotoxicity remains a significant cause of pre- and post-approval safety-based drug attrition because of the disconnect between the behavior of cultured immortalized cells and in vivo animal models to accurately simulate human cardiac disease states.Using high-content imaging systems, like the ImageXpress® Micro system, it is possible to assess the cytotoxic effect of compounds on pertinent human cardiac cells derived from induced pluripotent stem cells.

Membrane-permeable Calcein AM is cleaved by esterases in live cells to produce green fluorescence in the cytoplasm. In dead cells, the cell membrane is compromised, allowing the dye, ethidium homodimer, to enter and stain the nucleus (Figure 1).

Cardiomyocytes derived from human induced pluripotent stem cells (iPsc, iCell Cardiomyocytes from Cellular Dynamics Intl.) were incubated with varying concentrations of drugs which were analyzed for cadiotoxicity using high-content imaging (Figure 2) with the data plotted normalized to control (Figure 3). Valinomycin (columns 9 and 10) were highly cardiotoxic even at the lowest levels tested. 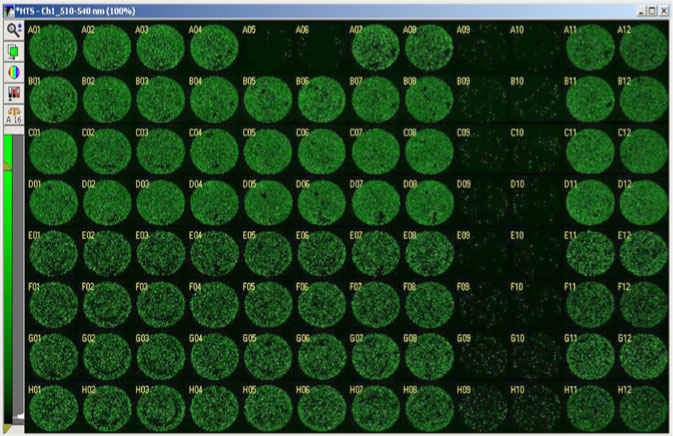 Figure 2. Whole well images of toxicity assay. Cardiomyocytes screened against an 8 point doseresponse of 5 different compounds tested in duplicate. The compound Valinomycin, in columns 9 and 10, was toxic even at the lowest dose tested (row H).

The ImageXpress Micro systems are a fully integrated hardware and software system for automated acquisition and analysis of images for high-throughput cell-based cytotoxicity testing. When configured with optional environmental control, we could monitor living cell responses or kinetic reactions in real-time for several days. In this study, we incubated cardiomyocytes and applied increasing concentrations of Antimycin A. After 90 minutes of incubation, we quantitated the cardiotoxicity (Figure 4). The saved images could be reviewed at any time and further analyzed with one of the MetaXpress® software application modules.

The ImageXpress Micro system is a powerful system for analysis of in vivo drug cardiotoxicity using cardiomyocytes derived from human induced pluripotent stem cells in both the whole cell cytotoxicity and mitochondria membrane depolarization assays. The system provides pharmaceutical scientists with critical information on compound cytotoxicity early in the drug discovery process to help reduce unforeseen cardiac side effects late in clinical trials.