Monitoring treatment effects on the cell cycle is particularly relevant to progressing oncology research and drug discovery. For instance, compounds known to inhibit mitosis are often utilized to slow division of cancer cells. High-content screening assays using live cells have been developed to enable the classification of cells by their cell cycle phase. The technology uses the BacMam delivery system to transiently transfect cells with two fluorescent fusion proteins that are regulated by cell cycle.

This time-lapse assay was run for 2-3 days inside an ImageXpress® Micro High-Throughput Imaging system equipped with environmental control, which maintained the living cells for the entire duration of the experiment. At specified time intervals, both brightfield and fluorescent images of live cells were collected. The complete workflow includes an automated analysis of the time-lapse images with an integrated software analysis module that identifies all cells based on the brightfield image and then classifies each cell based on the expression of fluorescent proteins that are present at different phases of the cell cycle.

Cell cycle was monitored over time by using the reagent Premo™ FUCCI Cell Cycle Sensor (Thermo Fisher). Immediately before plating, the cells were transfected with fluorescently-labeled cell cycle-regulated proteins, geminin and Cdt1. Geminin-emerald GFP and Cdt1-tagRFP emit at the wavelengths corresponding to FITC and TRITC, respectively. Since Cdt1 and geminin are only present during specific phases of the cell cycle, their expression in the nuclei can be used to classify cells by cell cycle phase (Figure 1). 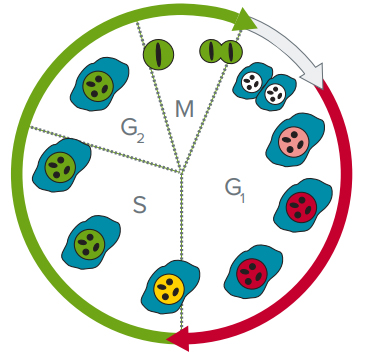 Using the FUCCI cell cycle sensor in living cells, changes in cell cycle phase can be measured over the duration of the compound treatment, providing more information than a fixed endpoint analysis. Time-lapse images of HeLa cells transfected with the FUCCI cell cycle sensor were acquired and analyzed using a MetaXpress analysis module that identifies cells in the brightfield image and then classifies each cell based on the expression of fluorescence in their nuclei. Cells in G1 phase express red fluorescence, cells in G2/M phase express green fluorescence, and cells in S phase express both red and green fluorescence (Figure 2). Cells in G0 do not emit fluorescent signals, but are still detected in the brightfield image and included in the analysis for total cell counts. In addition, individual cells can be tracked through each cell cycle phase over time if desired. 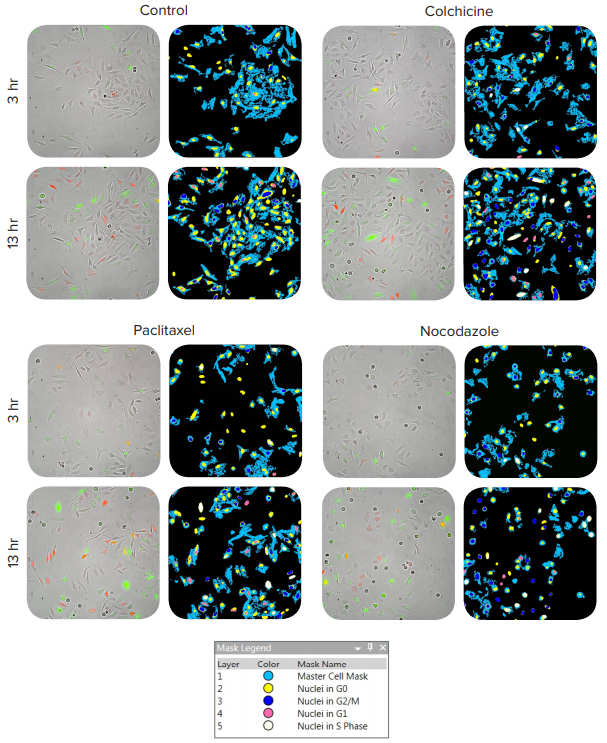 Figure 2. Time-lapse images of HeLa cells transfected with the FUCCI cell cycle sensor. The images were analyzed using a MetaXpress software module that identifies cells in the brightfield image and then scores them based on the expression of fluorescent cell cycle indicators in the nuclei: G1 = red only, G2/M = green only, S = red + green, G0 = non-fluorescent. Representative overlay images from time points 2 and 6 are shown for cells dosed with 2 nM Paclitaxel, 10 nM Nocodazole, and 100 nM Colchicine. The segmentation masks illustrate which cells were identified in each phase of the cell cycle

Cell cycle inhibitors cause cell arrest in specific phases of the cell cycle.

Analysis of each time point was accelerated using MetaXpress PowerCore parallel processing capabilities. After 24 hours of compound treatment, the majority of cells in the control wells were resting in G0 and only a minimal number of cells expressed cell cycle markers. Cells treated with Paclitaxel and Nocodazole demonstrated a significant number of cells in G2/M phases, where they remained in cell arrest for the duration of the timecourse (Figure 3)

The Premo™ FUCCI Cell Cycle Sensor reagent used in conjunction with the ImageXpress Micro system equipped with environmental control and MetaXpress software enables an accurate measurement of cell cycle phase in living cells with a highly efficient workflow. The high-throughput screening technology offers scientists a fast and robust image-based quantitation of the cell cycle markers, while maintaining cell integrity for long time course durations. Furthermore, the use of the MetaXpress software provides a capability to analyze brightfield images, eliminating the use of toxic cellular stains for live cells. Consistent and statistically relevant quantitative analysis allows for the testing of multiple compounds at differing concentrations and can be suited to the parameters of any cell cycle assay