There is increasing interest in exploring the use of three-dimensional (3D) spheroids for modeling developmental and tissue biology with the goal of accelerating translational research in these areas.1-3 As a result, the development of higher throughput quantitative assays using 3D cultures is an active area of investigation. In this study, we developed and optimized methods for the formation of 3D liver spheroids derived from human iPS cells as well as confocal imaging and analysis methods for toxicity assessment (Figure 1).

Figure 1. Hepatotoxicity assay using 3D spheroid liver micro tissues derived from iCell Hepatocytes. (A) iCell Hepatocytes were grown in 2D format for 7 days prior to using them to prepare 3D cultures. Following spheroid formation, the liver micro tissues were treated with compounds for 72 hours, then stained for 2 hours and imaged. Z-planes were acquired using the ImageXpress Micro Confocal system. (B) The acquired Z-plane images were used to generate sets of 2D and 3D image segmentation, which were analyzed to quantify key phenotypic features of the 3D cultures.

Human iPSC-derived hepatocytes4, iCell Hepatocytes 2.0 (Cellular Dynamics International) and HepG2 (ATCC) were used in the study. Cryopreserved cells were thawed and maintained according to manufacturer protocols. To prepare spheroid cultures of human iPSC-derived hepatocytes, iCell Hepatocytes 2.0 were pre-plated in 2D culture, then detached with Accutase, mixed with a Geltrex solution (ThermoFisher Scientific), and plated into low attachment spheroid plates (InSphero or Corning) at 1000 cells/well. Next, we centrifuged at 300 x g for 2 minutes to settle the cells and remove any bubbles prior to placing the plate into a humidified incubator at 37°C, 5% CO2. HepG2 cultures did not require the addition of matrix. Spheroids were formed within 24–48 hours.

Dye solutions were added onto the spheroid cultures and incubated for 2 hours prior to imaging. The dye solution was not washed out and care was taken during pipetting to avoid spheroid loss, disintegration, or displacement. Representative composite images of spheroids are shown in Figure 2. Images were acquired using the ImageXpress® Micro Confocal High-Content Imaging System (Molecular Devices), with a 10× Plan Fluor and 20× Plan Fluor objective. A stack of 11-17 images separated by 5-10 μm, a distance of 100 and 120 μm, were acquired using confocal imaging, starting at the well bottom. All individual images including 2D maximum projection images, were saved and used during analysis. 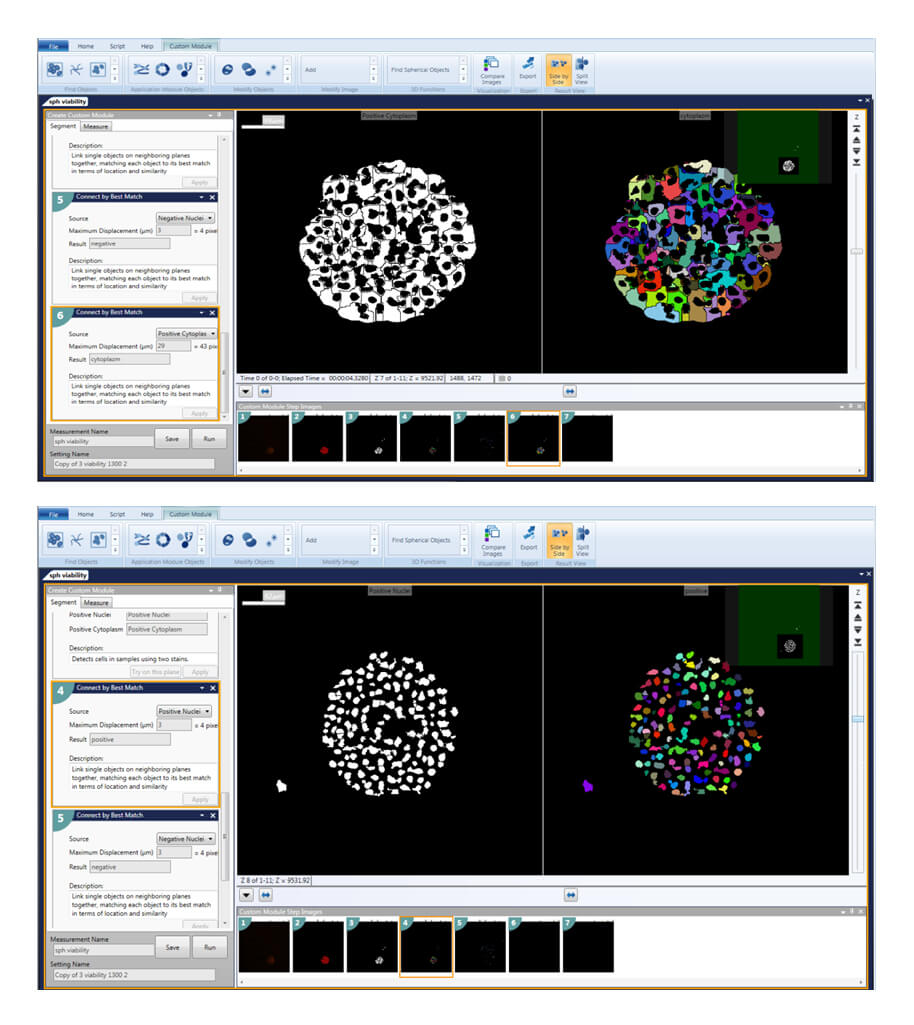 Figure 3. The Custom Module Editor can be used for defining spheroids. Once defined, spheroids can be analyzed with counting and characterizing individual cells, nuclei, or cytoplasm positive or negative for the marker of interest.

Find Spherical Objects analysis can also be used to define individual nuclei and cells as well as appropriate characteristics of individual cells as separate objects. Additional capabilities of the 3D structure analysis module include the ability to connect objects from different planes according to the user defined options “Connect by Best Match”, “Connect by Touching”, and “Do Not Connect Objects”.

Individual Z-planes are first segmented and analyzed as 2D images, for measurements such as nuclei count, live/ dead analysis, and cell scoring. Then objects are “Connected by Best Match” with user defined maximum displacement of each object, e.g. 3-6 μm for maximum displacement of nuclei and 20-30 μm for cytoplasm. As a result, nuclei or individual cells are segmented and scored in the 3D volume, without missing objects or counting any object twice. These steps allow all cells such as calcein AM positive or negative cells, and Ethidium homodimer positive and negative cells to be defined and enumerated.

Different colors can be used on individual cells to segment integrated and average intensities, volumes, diameters, distance between objects, and location of objects in three-dimensional space. Then, spheroid masking can be used to enumerate smaller objects that should be included or excluded from the mask. For example, in a hepatocyte spheroid assay which contains one spheroid per well, single-cell masking allows all cells to be enumerated and is able to distinguish cells included or excluded from the spheroid. This step is important in cases where spheroid integrity has been compromised. In the case of several or multiple spheroids per well (e.g. spheroids in a matrigel assay) using a similar analysis can also define the cellular content of each spheroid and report averaged measurements. Figure 4A illustrates the result of cell scoring analysis for calcein AM positive cells in different 2D planes. Finally, objects are connected in 3D space using the “Connect by Best Match” option. A similar approach was used to define ethidium homodimer positive and negative cells (live/dead analysis) and can be applied to the analysis of mitochondrial, intensity, apoptosis, or other desired stains and markers. Significant changes in spheroid phenotypes and cell content were observed after treatment with various hepatotoxins. Many spheroids lost their spherical shape, appeared disintegrated, “loose”, “flattened”, or “irregular”, had cells detach from the main body, or exhibited condensed nuclei due to cell death. These phenotypic changes in the spheroids after compound treatment occurred over a range of concentrations (Figure 4B). Quantitative analysis of the images included derivation of parameters to assess morphological features of spheroids, cell content, and complexity. The volume, diameter, and fluorescence intensities were measured, along with the number of calcein AM-positive cells (live) and the number of EthD-1- positive cells (dead). Total cell number did not decrease in response to compound effects. Instead, an increase in the number of dead cells and a concentration-dependent decrease in the number of viable cells were observed as a result of compound treatment. Average fluorescent intensity for calcein AM was dramatically reduced for the entire spheroid and individual segmented cells (cell cytoplasm).

For further investigation into the cytotoxicity mechanisms, we evaluated apoptotic phenotype and mitochondria integrity. Activation of apoptosis using caspase 3/7 dye was measured 24 hours after compound treatment. Typical activated caspase 3/7 staining patterns for control cells and those treated with methyl mercury are shown in Figure 2B. Treatment with compounds causing apoptosis resulted in an increase of caspase 3/7 stain intensity and the number of caspase 3/7 positive (apoptotic) cells. Mitochondrial potential was evaluated with MitoTracker Orange dye. Treatment of spheroids with compounds affecting mitochondrial integrity resulted in a dose-dependent decrease in MitoTracker Orange staining intensity (Figure 2C).

The 3D liver spheroid model combined with high-content 3D assays shows promise as a sensitive and reproducible screening tool for assessing hepatotoxicity. While assay predictivity compared to animal and clinical data still needs to be established, further development of these methods and models will increase their utility for in vitro screening.