The FDA recommends that all quality control tests used for biopharmaceutical product release follow current Good Manufacturing Practices (cGMP's) outlined in the Code of Federal Regulations Title 21. Validation of a quality control test must demonstrate that it provides acceptable performance with respect to accuracy, precision, linearity (characterization of the assay response curve, including sensitivity), detection limit, system suitability (only required for chromatographic assays) and specificity1 . Tests used to quantitate residual DNA in final product biopharmaceuticals (e.g. Threshold® Total DNA assay, hybridization, etc.) fall into this category and should be validated acording to these criteria.

Since linearity and specificity have been previously characterized for the Threshold Total DNA assay2 , the other relevant performance criteria that remain to be evaluated prior to routine DNA quantitation using the Threshold System are accuracy, precision and detection limit. Accuracy can be demonstrated through evaluation of the recovery of DNA added to the sample (spike recovery). Precision can be evaluated through within-day, day-to-day, operator-to-operator and laboratory-to-laboratory performance studies. The detection limit will be a function of the sample pretreatment method employed and the confidence level (95%, 99.9%, etc.) required.

This application note suggests one technique for validating quantitation accuracy. In addition, techniques are suggested for quantitation of residual DNA and determination of the detection limit in actual biopharmaceutical samples and buffers. In this study, it is assumed that the most efficient pretreatment protocol has already been established3 and that the proper DNA standard has been chosen, prepared and qualified4

In this study, samples containing a known amount of added DNA (a spike) were prepared by: 1) serial dilution of a stock DNA solution into an appropriate diluent (e.g. control buffer or 1 mg/ml protein solution for the IgG and rhGH studies); or 2) individually spiking samples (e.g. control buffer or 1.6 mg/ml protein solution for protein X) with known amounts of DNA. All samples were prepared in triplicate and protease digested overnight in individual sterile screw-capped tubes. Aseptic technique was observed in all sample handling steps prior to the DNA heat-denaturation step.

The Threshold bioanalytical system software, THS, calculates DNA concentration in units of mass per 0.5 ml sample. The resulting quantitated values will include DNA that may have been introduced during the pretreatment steps. This exogenous DNA should be subtracted before reporting the level of DNA per mg of biopharmaceutical product. Thus, when proper standards and controls are included, quantitation of residual DNA in the sample can be calculated manually. Quantitation accuracy can be assessed by evaluating the percent recovery of DNA added to an unknown sample relative to buffer controls treated in a manner identical to that of the unknown sample.

If the spike recovery guidelines listed above are followed, each treated sample point should be within 20-30% of its corresponding control. Thus, the two lines should be roughly parallel. Comparison of the slopes of the two lines reveals that they differ by only 2.5%. Moreover, both regression coefficients are greater than 0.998, thus this linear analysis is valid and the results show that the shape of the standard curve is unaffected by the pretreatment method and associated reagents used. 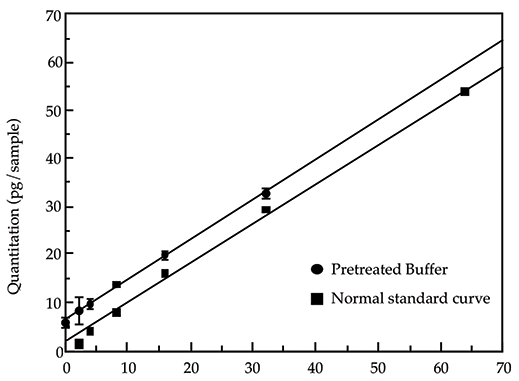 Determination of exogenous DNA that may be introduced by the pretreatment method and its associated reagents can be calculated by taking the difference in yintercept between the pretreated buffer and the normal standard curve. In this example, the difference is 5.1 pg. Thus, 5.1 pg of DNA was introduced during sample pretreatment. This amount should be taken as the baseline in manual calculations to determine residual DNA in biopharmaceutical samples that have been treated in a similar manner and in the same experiment.

Validation and quantitation of residual DNA in samples

Also,,the difference in y-intercept for both proteins is ≤ 1 pg. Because of these facts and for simplicity, in these graphs, one line is used to represent the data for all pretreated samples. 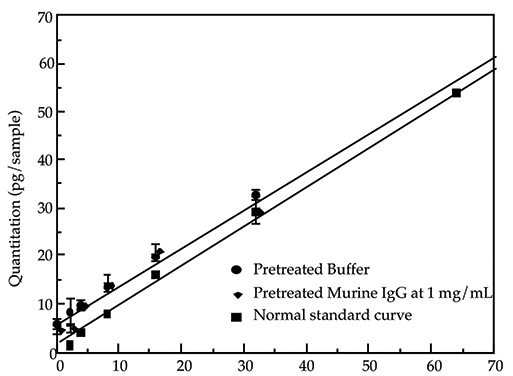 Figure 2: Comparison of pretreated buffer and pretreated final product IgG sample to a normal standard curve. Quantitation of pretreated buffer sample was based on the normal standard curve. Pretreated samples were prepared as bulk solutions, separated into triplicates for overnight digestion and then assayed the next morning. Pretreatment consisted of overnight digestion at 55°C in the presence of 0.1% SDS and 100 µg/ml Proteinase K. 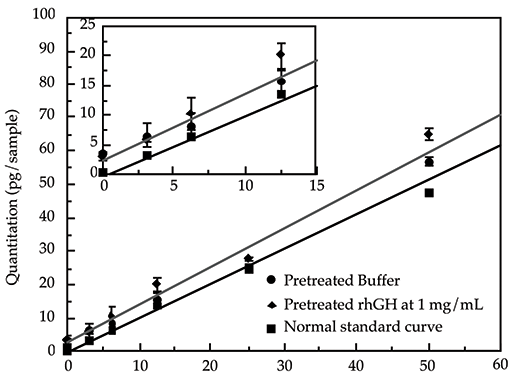 Figure 3: Comparison of pretreated buffer and pretreated final product rhGH to a normal standard curve. Quantitation of pretreated buffer sample was based on the normal standard curve. Pretreated samples were prepared as bulk solutions, separated into triplicates for overnight digestion and then assayed the next morning. Pretreatment consisted of overnight digestion at 55°C in the presence of 0.1% SDS and 100 µg/ml Proteinase K.

In both cases, the level of DNA can be reported as being less than the detection limit of the method. The sample constituents, in these two cases, do not affect the recovery of added DNA and as a result accurate quantitation is validated.

Once the assay quantitation accuracy is validated based on acceptable recovery at multiple spike levels, routine quantitation can be performed by testing replicates (e.g. duplicates or triplicates) of the sample and its appropriate buffer control and calculating the difference. However, it is recommended, that even in routine testing, one or two appropriate spike levels should be included as internal controls. When high sensitivity is required or detection limit is a problem, the testing of replicates at multiple spike levels in the low end of the standard curve is recommended. This will allow determination of the y-intercepts and resulting residual DNA level (difference in y-intercepts between the sample and the buffer control lines) with a higher degree of confidence.

Using these definitions, the following calculation can be made for this sample:

Based on this result, 1.6 mg of protein X can be assayed using an overnight digestion at a detection limit of 2 pg with 99.9% confidence. Thus, in reporting quantitation of residual DNA in this sample, if no difference is seen between the sample and the appropriate control buffer, the level of residual DNA can be reported as less than 2 pg DNA per 1.6 mg protein or less than 1.25 pg/mg protein. In general, pretreatment requiring an overnight digestion will provide a detection limit in the range of 2 - 5 pg per 0.5 ml sample, while, because of the extra sample handling required, overnight digestion followed by DNA extraction will usually provide detection limits in the range of 5 - 10 pg per 0.5 ml sample.

In the above analysis, “raw” signals, in triplicate, spread over different sticks were used without adjustment for stick-to-stick variations (“stick gain”). This gives a more conservative estimate of the detection limit. Usually, it is best to first adjust the signals by dividing by the stick gain before determining the detection limit. This gain adjustment will be important when the range of gain values for the sticks is large.

Residual DNA can be manually quantitated using linear regression analysis of data obtained by spiking replicate samples and controls at multiple levels and taking the difference of the y-intercepts of the two lines (sample and control). This analysis is valid only in the low, linear portion of the standard curve. The values used in the analysis can be based on quantitation using a normal standard curve. Thus, pretreatment of the standard curve and the associated on-stick calibrators is not required and is not generally recommended. Levels measured above the background associated with the pretreatment method itself should be confirmed with DNase I treatment and/or a dilution series of the sample.

This application note demonstrates one technique for validating the quantitation accuracy of the test method used to determine residual DNA levels in final product biopharmaceutical samples. Suggestions have been presented for methods to determine both the quantity of residual DNA and the detection limit for a particular sample with its associated pretreatment method. These suggestions should not be considered as strict guidelines which all users must follow, but are to be viewed solely as guidelines for efficient application of the Threshold System