As cannabis is legalized in more states across the US, state agencies are setting their own regulations and requirements for growers, retailers, and testing laboratories. For example, in January 2019, cannabis regulations took effect in California, requiring that under state law all cannabis goods must be tested to ensure consumer safety. Potential contaminants of cannabis include mycotoxins, toxic byproducts of fungi of the genus Aspergillus that can cause disease and death in humans or animals when consumed. California’s Bureau of Cannabis Control (BCC) requires testing of cannabis products for the most common and dangerous mycotoxins: aflatoxins B1, B2, G1, G2, and ochratoxin A. The limit set for these toxins is 20 ppb, the same level set by the FDA for most foods. Other states have their own requirements for aflatoxin levels.

Strip tests and enzyme-linked immunosorbent assays (ELISAs) are two common, relatively low-cost methods for mycotoxin testing of food and feed samples. An ELISA provides the advantage of higher throughput, as it is run in a 96-well microplate format, while only two samples at a time can be run on a test strip. AgraQuant Total Aflatoxin 4/40 ELISA kit from Romer Labs can be used to quantify aflatoxin in food and feed components, with the ability to run 44 different samples simultaneously, saving significant time when a large number of products must be tested.

Here, we demonstrate how the AgraQuant Total Aflatoxin 4/40 ELISA kit can be used together with the SpectraMax® ABS Plus Microplate Reader and SpectraMax® iD5 Multi-Mode Microplate Reader to test for levels of aflatoxins B1, B2, G1, and G2 in one of the most common cannabis products, the flower. A general workflow for sample prep and ELISA is shown in Figure 1.

The cannabis sample was placed in a plastic bag and crushed by hand. One gram of material was weighed and placed in each of four 50 mL conical tubes.

Samples were then spiked with aflatoxin B1 standard at 0, 10, 20, and 30 ppb. 20 mL of 70% methanol was added to the samples, and tubes were vortexed vigorously for three minutes. The resulting extract was filtered through Whatman grade 1 filter paper into a clean 50-mL conical tube.

From each extracted, filtered sample, 4 mL was pipetted into a clean conical tube, and 20 mL deionized water was added. The entire 24 mL was passed through an immunoaffinity chromatography (IAC) column. Aflatoxin in the sample was selectively bound by antibodies in the column. Unbound material was washed away by rinsing the column with 20 mL of 0.5 M ammonium acetate. A clean tube was placed under the column, and sample was eluted with 1 mL of 100% methanol.

100 µL of conjugate was added to each dilution well, followed by 50 µL of aflatoxin standard or spiked sample. A 2:1 ratio of conjugate to sample was thus maintained as directed in the kit protocol. Contents were mixed well with an 8-channel pipettor. 100 µL of each dilution was transferred to the antibody-coated microwells of the ELISA plate, which was then incubated for 15 minutes at room temperature.

After incubation, the ELISA plate was washed five times with deionized water. 100 µL of substrate was added to the plate, and the plate was incubated for five minutes at room temperature. 100 µL of Stop Solution was added, and absorbance of the samples in the plate was measured at 450 nm on the SpectraMax ABS Plus and SpectraMax iD5 readers. 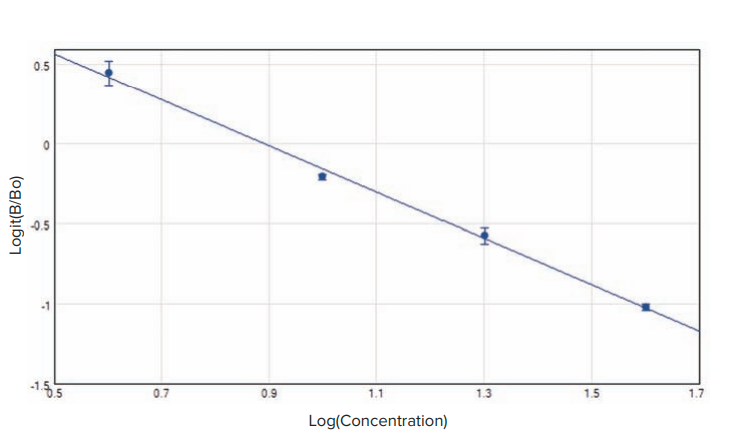 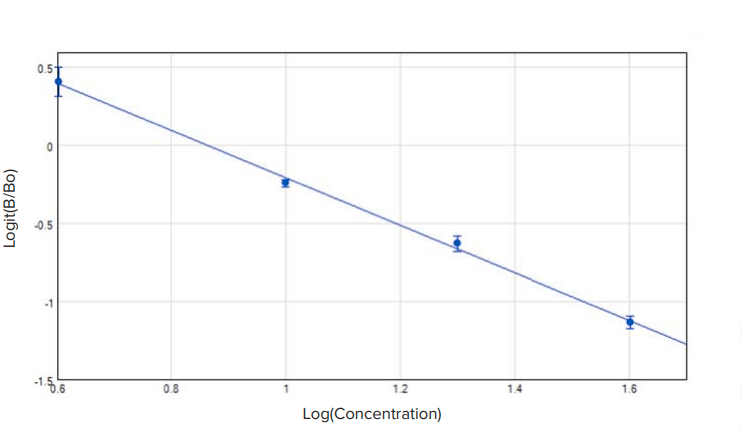 The formula editor and group tables in SoftMax Pro Software were used to calculate %B/Bo and Logit (B/Bo). Once the analysis was set up, it was saved as a SoftMax Pro protocol that could be used to automatically analyze the results of future assays.

Percent recovery of aflatoxin in spiked samples was determined from the standard curve. From 71% to 112% recovery was achieved for samples spiked with 10, 20, and 30 ppb, meeting recommended criteria (Table 1).

Table 1. Spike recovery.. In samples spiked with aflatoxin B1, percent recovery values fell within acceptable limits for the aflatoxin ELISA.

An ELISA test is easy to use, sensitive, and can handle a large number of test samples compared to other methods like test strips. The AgraQuant Total Aflatoxin 4/40 ELISA kit enables quantitation of aflatoxin at levels required to assure the safety of food and feed products. Here, we have shown that this method can be used to measure aflatoxin recovered from extracts of aflatoxin standard-spiked cannabis flower. Data were obtained using SpectraMax ABS Plus and SpectraMax iD5 readers. Results analyzed using SoftMax Pro Software confirmed that aflatoxin measured in samples was consistent with the amount of aflatoxin spiked into the samples.