HTRF is a versatile technology developed by Cisbio for detecting molecular interactions between biomolecules.1Combining the features of fluorescence resonance energy transfer (FRET) and TRF, it uses Europium (Eu) cryptate as its donor fluorophore and a modified allophycocyanin (XL665) or the small molecule d2 as the acceptor fluorophore. When interacting biomolecules are labeled with Europium cryptate and d2, FRET takes place between the donor and the acceptor fluorophores, resulting in fluorescence emission monitored at 665 nm, while most of the excitation energy of the cryptate is released as fluorescence emission at 620 nm. Well-to-well variability is corrected by using Cisbio’s patented HTRF ratio calculation, which utilizes the ratio of the 665 nm and 620 nm fluorescent signals.

HTRF assay performance on the SpectraMax M5ereader is demonstrated here with two different HTRF assay kits, cAMP dynamic 2 and IP-One. G-protein coupled receptors signal through two major pathways, regulation of cAMP and increase in intracellular calcium levels mediated by IP3. With the cAMP dynamic 2 kit, cAMP levels are detected using a Eu cryptate-labeled monoclonal anti-cAMP antibody and d2-labeled cAMP. Native cAMP produced by cells competes with cAMP-d2 for binding to anti-cAMP antibody-cryptate. An increase in cellular cAMP leads to a decrease in FRET that is detectable as a decrease in the fluorescence at 665 nm. The IP-One assay has a similar format and uses a monoclonal antibody specific to IP1, a more stable downstream metabolite of IP3 that accumulates in signaling cells in the presence of lithium chloride. Fluorescence at 665 nm is inversely proportional to the concentration of IP1 in the calibrator or cell lysate. This application note presents both cell-based assay data and standard curves generated with the cAMP dynamic 2 and IP-One kits. These HTRF data demonstrate the excellent dynamic range and Z’ factors2obtainable with the SpectraMax M5e reader.

CHO-M1 cells were grown in Ham’s F12 medium supplemented with 10% FBS, 1% penicillin/streptomycin/L-glutamine, and 200 µg/mL G418. The cAMP dynamic 2 assay was performed on cells in suspension. Cells were trypsinized the day of the assay, resuspended in Ham’s F12 medium without additives, and seeded at 4,000 cells per well in a volume of 10 µL per well in a white 384-well microplate. To stimulate cAMP production, cells were treated with 10 µL of forskolin at final concentrations of 3 nM to 1 mM for one hour prior to addition of detection reagents. IBMX was added to assay wells at 0.5 mM to inhibit phosphodiesterasemediated cAMP degradation.

After one hour of forskolin treatment, cAMP-d2 in conjugate and lysis buffer, and anti-cAMP antibody-cryptate, were added to the cells as described in the product insert. A cell negative control containing untreated cells received anticAMP antibody-cryptate and conjugate and lysis buffer without cAMP-d2. This FRET-negative control was necessary for calculating Delta F values as outlined in the HTRF package insert3. The final assay volume for all samples and standards was 40 µL, but assay volume can be adjusted for different microplate types.

Standards for cAMP were prepared as indicated in the cAMP dynamic 2 HTRF package insert. Final concentrations of cAMP ranged from 0.17 to 712 nM, and a positive control without cAMP (maximum FRET) was included. A cAMP control consisting of free cAMP was used to monitor assay activity, and a negative (no-FRET) control without cAMP or cAMP-d2 was used to calculate Delta F. cAMP-d2 was added to all standards and to the positive control, while the negative control received conjugate and lysis buffer without cAMP-d2. Anti-cAMP antibodycryptate was added to all standards and controls. After a one-hour incubation at room temperature, the microplate was read on the SpectraMax M5e reader. (See Table 1 for instrument settings.)

CHO-M1 cells were cultured as described above. Cells were seeded into 384-well microplates at 10,000–40,000 cells per well in complete growth medium the day before the assay. The next day, cells were stimulated with carbachol concentrations ranging from 15 nM to 33 µM (stimulation buffer containing lithium chloride was used to prepare carbachol concentrations). After a one-hour stimulation, IP1-d2 in conjugate and lysis buffer, and anti-IP1 antibodycryptate, were added to the wells. A cell negative control containing untreated cells received anti-IP1 antibody-cryptate and conjugate and lysis buffer without IP1-d2. The final assay volume was 40 µL, but as with the cAMP assay, this volume can be adjusted for different microplate types.

IP1 standards with final concentrations ranging from 21.5 to 22,000 nM were prepared by diluting reconstituted IP1 standard in stimulation buffer as indicated in the IP-One HTRF package insert.4A positive IP1 and a negative control without IP1 were included. IP1-d2 was added to all standards and to the positive IP1 control, while the negative control received conjugate and lysis buffer without IP1-d2. Anti-IP1 antibody-cryptate was added to all samples. After incubating for one hour at room temperature, the microplate was read on the SpectraMax M5ereader with the settings indicated in     Table 1.

Data from both cAMP and IP-One assays were analyzed according to Cisbio’s guidelines, using SoftMax®Pro Software. Four different ready-to-use HTRF protocols in SoftMax Pro Softwarehave been designed to simplify data acquisition and analysis for all types of HTRF assays currently available.

FRET was calculated as follows:

(where Rationegis the ratio for the negative control)

Wavelength, delay and integration settings have been optimized for the dual monochromator-based SpectraMax M5e reader. Most notably, the best emission wavelength for XL665/d2 donor was determined to be 668 nm rather than 665 nm as indicated in HTRF product information.

Best results were obtained from cAMP cell-based assays using about 4,000 CHOM1 cells per well in a 384-well microplate (40 µL final assay volume). Optimal cell density may vary according to cell type and specific assay conditions. A one-hour treatment of the cells with forskolin yielded a dose-response curve with an EC50of 11.4 µM and Z’ factor of 0.86 (Figure 1). Delta F% values calculated using Cisbio’s ratiometric formulas ranged from 47 to 707 (Table 2), similar to the range observed for the cAMP standard curve (Figure 2, Table 3). 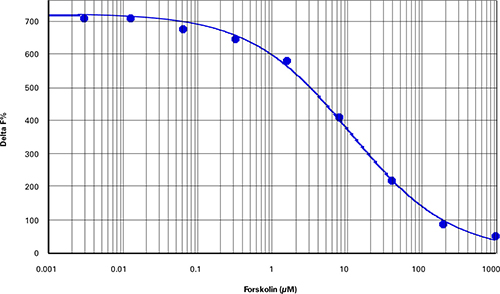 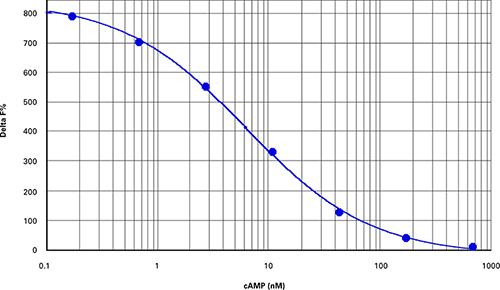 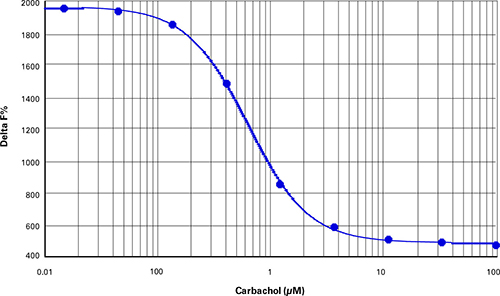 Preparation of IP1 standards as directed in the IP-One HTRF package insert produced a calibration curve with a Z’ factor of 0.84 (Figure 4) and Delta F% values ranging from 820 to 11883 (Table 5). The SpectraMax M5eMulti-Mode Microplate Reader with HTRF certification expands the range of assay methods available to researchers who want the flexibility of a dual monochromator-based system and the versatility of multiple detection modes. IP-One and cAMP HTRF assays, when run on the SpectraMax M5e reader, exhibit wide dynamic ranges and excellent Z’ factors ranging from 0.78 to 0.91. Data analysis is simplified using SoftMax Pro Software with preconfigured HTRF protocols.