Gq protein-coupled receptor activation is commonly monitored in live cells in real time using calcium-sensitive dyes on a fluorescence plate reader. Automated liquid handling within the plate reader is generally required to deliver agonist compounds to the cells in the microplate while the detection system takes real-time readings of compound-induced changes in fluorescence intensity values. Analysis of the resulting kinetic readings yields information about the compound response profiles, including EC50 and IC50 values for agonists and antagonists. 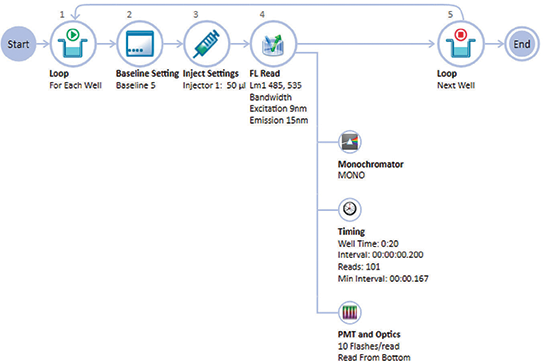 1321N1 cells were used as an ‘assay-ready’ reagent. Briefly, one vial of frozen cells (~ 10 million cells per mL) was thawed rapidly in a 37°C water bath and re-suspended in 10 mL of DMEM medium. The cells were centrifuged for five minutes at 1,000 RPM, the medium was discarded, and then the cells were suspended at 300,000 cells per mL in fresh DMEM. Cells were then seeded into a 96-well black-wall, clear-bottom plate at 30,000 cells per well in 100 µL per well. They were incubated overnight at 37°C, 5% CO2.

For both cell lines, calcium assays were performed on the day after cells were seeded in microplates.

To each well of the microplate containing cells, 100 µL of Dye Loading Buffer was added. The plate was then incubated for two hours at 37°C, 5% CO2. Cells were not washed prior to assay.

For the agonist assays, 5X working stocks of carbachol (CHO M1WT3 cells) or acetylcholine (1321N1 cells) were prepared in assay buffer. 1:3 dilution series of the working stocks were made in 4-mL polypropylene tubes. A full concentration-response curve, consisting of eight concentrations, was prepared for each compound.

The antagonist atropine was prepared as a 1:3 dilution series. Working stocks were added to the wells of the assay plates to achieve the appropriate final concentrations, and the plates were equilibrated for 30 minutes. The injector was then used to deliver agonist at EC80 concentration to the wells.

The Acquisition Plan in SoftMax Pro Software was used to define the instrument and injector settings (Figure 1).

Antagonist studies were done by manually pipetting antagonist dilution series to the wells of the assay plate containing dyeloaded cells, equilibrating for 30 minutes, and then running the kinetic assay on the SpectraMax i3x reader with injection of a single EC80 concentration of agonist into all the assay wells.

As a control, additional wells in the same dye-loaded cell plate were assayed on the FlexStation 3 Multi-Mode Microplate Reader, which uses an integrated multichannel pipettor to deliver compound to the wells. Instrument settings for the FlexStation 3 reader are shown in Table 1.

Consistent agonist concentration response curves were achieved on the SpectraMax i3x reader by using the injector module to deliver each compound dilution in a separate plate read step. The compounds were run from low to high concentration to avoid carryover issues. Antagonist assays, which involve the delivery of a single EC80 concentration of agonist to wells containing cells and antagonist compound, were done as a single plate read.

The agonist carbachol activated the M1 muscarinic receptor expressed in CHO M1WT3 cells with an EC50 value of 32.8 nM on the SpectraMax i3x reader and 21.7 nM on the FlexStation 3 reader (Figure 2). Atropine antagonized this activation with IC50 values of 0.54 nM and 1.4 nM, respectively (Figure 3). The muscarinic acetylcholine receptor (mAChR) expressed in 1321N1 cells was activated by acetylcholine with EC50 values of 0.50 µM and 0.24 µM (Figure 4), and antagonized by atropine with IC50 values of 0.24 nM and 0.62 nM (Figure 5). Table 2 summarizes the concentration response values obtained for both cell lines. 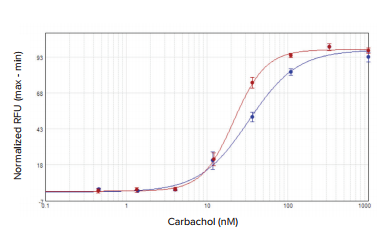 Table 2. Summary of EC50 and IC50 values obtained on the SpectraMax i3x reader with injector module and on the FlexStation 3 reader.

Figure 3. CHO M1WT3 antagonist IC50 curves. Cells were treated with increasing concentrations of the antagonist atropine and assayed for response to addition of an EC80 concentration of the agonist carbachol. Results are shown for the SpectraMax i3x reader with injector module (blue) and FlexStation 3 reader (red). 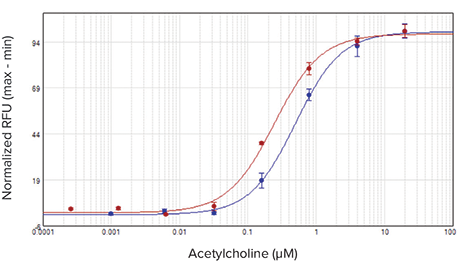 Figure 4. 1321N1 agonist concentration response curves. Cells were treated with acetylcholine and assayed for calcium response on the SpectraMax i3x reader with injector module (blue) or the FlexStation 3 reader (red). 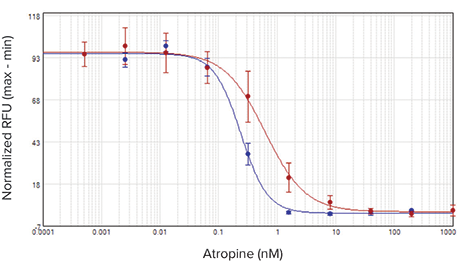 Figure 5. 1321N1 antagonist IC50 curves. Cells were treated with increasing concentrations of the antagonist atropine and assayed for response to addition of an EC80 concentration of the agonist acetylcholine. Results are shown for the SpectraMax i3x reader with injector module (blue) and the FlexStation 3 reader (red).