Multiparametric assays for cardiomyocytes on a single platform

Stem cell-derived human cardiomyocytes have phenotypic characteristics and electrophysiological profiles similar to those of native human cardiac cells. Cardiomyocytes in culture are able to form a beating syncytium, which behaves similarly to native cardiomyocytes. Oscillation of intracellular calcium levels occurring with synchronized contractions of the cells can be monitored using a calcium-sensitive dye, and treatment-induced changes in the pattern of oscillation can be monitored via changes in fluorescent signal over time.

Recently, it has been shown that changes in intracellular calcium flux associated with cardiomyocyte contractions can be monitored on a fluorescence imaging plate reader (FLIPR Tetra® System), as well as on the SpectraMax® Paradigm Multi-Mode Microplate Reader. Now, the SpectraMax® i3 Multi-Mode Microplate Reader with SpectraMax® MiniMax™ 300 Imaging Cytometer from Molecular Devices enables detection of cardiomyocyte beating and fluorescence imaging of cell viability in a single instrument. Compound-induced changes in observed beating rate can be correlated to cell viability for a more accurate assessment of cardiotoxicity

A cardiac beating assay was performed on the SpectraMax i3 reader using the EarlyTox™ Cardiotoxicity Kit from Molecular Devices for assessment of compound effects upon cardiomyocytes. iCell Cardiomyocytes, human induced pluripotent stem cell (iPSC)-derived cardiomyocytes from Cellular Dynamics International, were cultured in 384-well microplates until a synchronously beating layer formed. Cells were then treated with compounds from the SCREEN-WELL® Cardiotoxicity Library (Enzo Life Sciences) at 10 μM for 24 hours and assessed for compound effects on beating and viability.

Cardiomyocyte beating parameters were measured on the SpectraMax i3 reader using a kinetic, well-by-well fluorescence read mode and analyzed using Peak Pro software algorithms in SoftMax® Pro Software. Sixteen analysis parameters, including peak count, peak frequency, peak amplitude, peak width, decay time, and several others, were calculated. In this example peak count, the number of peaks measured during a 25-second reading, was used to quantify the effects of compounds on cardiac beating.

To obtain additional information on possible toxicity of compounds that caused a decrease in the peak count, live cells were stained with the green-fluorescent viability dye calcein AM after compound treatment and be at measurement. Cells were imaged using the SpectraMax MiniMax Imaging Cytometer, a field-upgradable option for the SpectraMax i3 reader. Several cell analysis methods are available in SoftMax Pro Software, including cell count, cell proliferation, and marker expression. Changes in cell viability due to compound toxicity were analyzed using the cell proliferation analysis protocol to measure the area covered by live, calcein AM-stained cells in each well.

Using the combined analysis of cardiomyocyte beating and viability imaging, compounds with differing effects on cells were identified. The average peak count for control wells was 12 peaks per 25 second read time, and wells in which peak count was significantly reduced could be easily distinguished by the software.

Plate views offer an easy visual check for correlation between the effects of compounds on beating patterns and cell viability. Figure 1 shows plate views of the data for both cardiac beating (top) and area covered by viable cells (bottom). In Figure 2, more detailed views of individual kinetic traces and representative images are shown for compounds with different effects on cardiomyocytes.

Figure 1. Multi-well views of cardiac beating and viability data. Top: Representative kinetic traces from cardiomyocytes treated with compounds from the SCREEN-WELL® Cardiotoxicity Library. Bottom: Heat map of cell viability imaging results, expressed as percentage of the well covered by live cells, for the same assay plate as above. Blue-shaded wells indicate low viability, while red-shaded wells indicate highest viability. Examples of duplicate DMSO-treated control wells are circled in green on both plate views. Digoxin-treated wells showing reduction in peak count without loss of viability are circled in yellow, and staurosporine-treated wells where both peak count and viability are significantly reduced are circled in blue.

Several compounds that dramatically reduced the peak count were shown to have little or no effect on overall cell viability. For example, digoxin, a drug widely used in the treatment of arrhythmias, reduced peak count from the roughly 12 beats per 25-second reading down to 1 or 2 beats. However, cell covered area was 71% compared to 82% in DMSO-treated controls—not a significant reduction in cell viability. The dopamine inverse agonist haloperidol had a distinct effect on beating profile without impacting viability. Other compounds, like staurosporine, greatly reduced both cell viability and peak count (Figure 2). 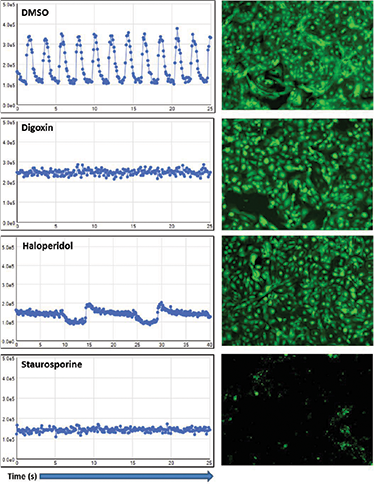 Figure 2. Comparing peak data to cell viability. Detailed views of kinetic traces and images of cells treated with DMSO (control), digoxin, haloperidol, or staurosporine. Digoxin and haloperidol decreased the number of peaks measured in beating cells but had no significant effect on viability, while staurosporine negatively affected both beating and viability.

Based on results from the compound library screen, compounds with observed effects on beating rate and cytotoxicity were selected for more detailed study. Representative compounds were added to cardiomyocytes in a 1:3 dilution series to determine IC50 values. As before, cardiomyocyte contractions were visualized using the EarlyTox Cardiotoxicity dye, and beating profiles measured on the SpectraMax i3 reader

Data were analyzed using Peak Pro algorithms in the SoftMax Pro Software (Figure 3, top). After the beating was measured, the same cells were stained with calcein AM and imaged using the MiniMax Imaging Cytometer to determine cell viability. Concentration-response curves were plotted as area covered vs. compound concentration (Figure 3, bottom). 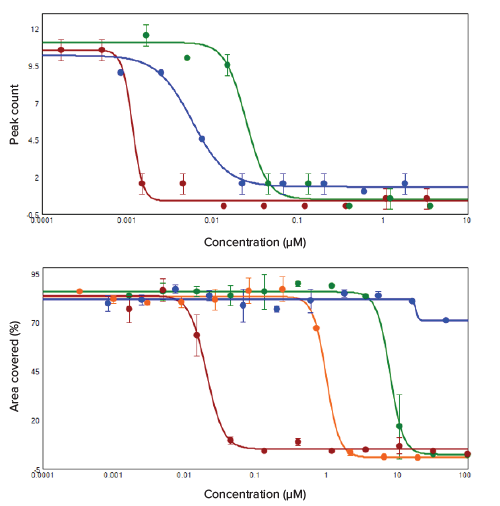 The SpectraMax i3 reader with MiniMax cytometer enables detection of cardiomyocyte beating and fluorescence imaging of cell viability in a single instrument, with integrated data analysis provided by SoftMax Pro Software. Compound-induced changes in observed beating rate, or abnormal rhythms, can be correlated to cell viability. Concentration-dependent effects on cardiomyocyte beating on the SpectraMax i3 reader for several reference compounds have been demonstrated. Increased cell death was observed with heat shock, particularly after 24 hours. Stressed cells had a higher overall percentage of dead cells than did the normal population. These results match reasonably well with the apoptosis result, suggesting that all or most of the cell death observed is due to apoptosis.

The MiniMax cytometer was used to image cytotoxic effects in the same wells that were monitored for cardiomyocyte beating. Measuring functional readouts, like calcium flux and cell viability, in the very same wells, provides complementary information on the impact of compounds upon cardiomyocyte function and overall cell toxicity.

The SpectraMax i3 reader with MiniMax cytometer seamlessly combines the benefits of imaging with the versatility of multi-mode plate reader assays, while SoftMax Pro Software offers a simple workflow from data collection to analysis.