Fluorescent proteins have become enormously popular as tools for monitoring biological events in vivo. Green fluorescent protein (GFP) from the jellyfish Aequorea victoria was the first protein of choice, but there are now numerous others available, including enhanced GFP variants, fluorescent proteins from other species of jellyfish and reef coral proteins. They can be cloned in a diverse range of cells and organisms, from bacteria and yeast to plants and mammals. The fluorescent proteins are stable, have minimal toxicity, and have the ability to generate visible fluorescence in vivo without the need for external cofactors. They can be used as molecular tags or as independent reporters to visualize, track and quantify many different cellular processes, including protein synthesis and turnover, protein translocation, gene induction, and cell lineage. The various proteins have different colors, so they can be used in multiplexed assays. They can be monitored by fluorescent microscopy and flow cytometry. If there is no need to physically sort the cells or to monitor intracellular migration, microplate fluorometry offers a preferable, more convenient and higher-throughput detection system. Here, we show that Molecular Devices microplate readers can easily and noninvasively measure fluorescent proteins in living cells.

We obtained three HEK-293 cell lines from Clontech, each stably transfected with a different fluorescent protein. The purposes of the study were: 1) to determine the optimal wavelength settings for three cell lines, 2) prepare dilution series of each cell line to estimate lower limits of detection (LLD), and 3) demonstrate feasibility of discriminating one cell line in the presence of another.

The cells were cultured in bulk flasks in DME + 10% FBS + 1% Pen/Strep/L-glutamine + 500 µg/mL of G418. Non-transfected HEK cells were included as controls. The night before the experiment, they were trypsinized and the cell suspension was diluted serially to give cell densities ranging from 500,000 down to 100 cells per mL. They were seeded overnight in 96-well (100 µL/well) and 384-well microplates (25 µL/well). Thus the seeded cell densities were 50,000 to 10 cells/well (96-well plate) and 12,500 to 2.5 cells/well (384-well plate). There were 12 replicate wells per dilution in both 96-well and 384- well plates. The microplates were read the next day from the bottom and the top in SpectraMax M5 and Gemini EM readers.

Both the SpectraMax M5 and the Gemini EM are monochromator-based, microplate readers. The excitation and the emission wavelengths on these instruments can be tuned for optimal signal over background for each unique fluorophore, offering an advantage over filter-based instruments. In general, the strategy is to do a preliminary emission scan with the excitation wavelength set 20-25 nm below the expected Ex λmax and an excitation scan with the emission wavelength set 20-25 nm above the Em λmax. These two scans should give the actual Ex and Em λmax values. Additional scans are then done to determine the excitation and emission wavelength combination giving optimal signal/background for quantitative analyses. (Depending on the Stokes shift, the Ex wavelength will be lowered and the Em wavelength raised and an emission cutoff filter used to block unwanted excitation light). Sometimes it is necessary to do the final emission scans twice in order to choose between two different cutoff filters. 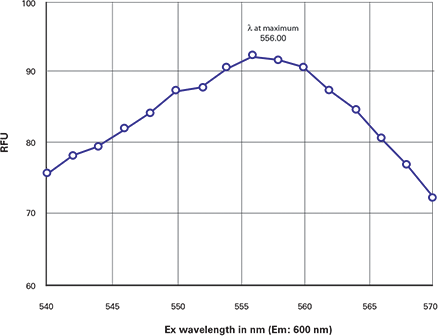 To determine the emission λmax, an emission scan was done with the excitation wavelength set to 535 and the scan revealed the emission λmax to be 584 nm (Figure 2). The Ex and Em λmax values were close to the published values of 557/579. 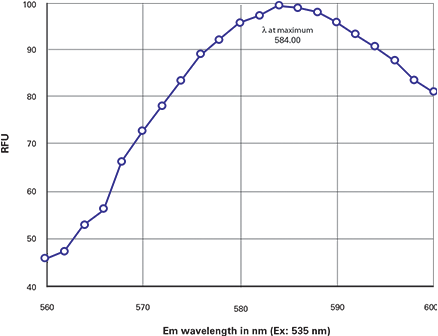 The next steps were done to determine the best Ex and Em settings for optimal signal/ background. Because the Stokes shift was small (22 nm), it was obvious that it would be necessary to lower the excitation wavelength, raise the emission wavelength to increase the separation between the two and also to use an emission cutoff filter for best sensitivity. Accordingly, the excitation wavelength was lowered to 550 nm and the 570 nm emission cutoff filter was selected to block unwanted excitation light above 570 nm. An emission scan between 575 and 600 nm showed a peak of approximately 587-588 for the DsRedtransfected cells (Figure 3, upper curve). The background (non-transfected cells) showed a relatively flat plot in that region (Figure 3, lower curve). Based on this scan, the optimized settings were deemed to be Ex/Em = 550/588 with a 575 nm emission cutoff filter. 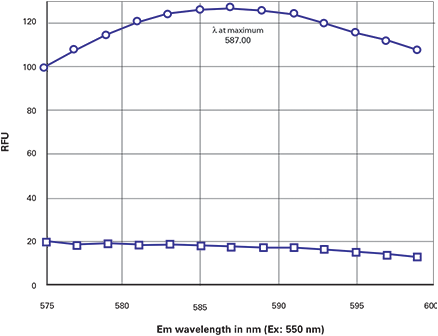 The observed lambda maxima and our recommended settings for quantitative analysis are summarized in Table 1.

*The M5 and Gemini EM have subtle differences in their optics. For the Gemini EM, the recommended settings for AcGFP and ZsGreen are Ex/Em 480/510 with a 495 cutoff filter. 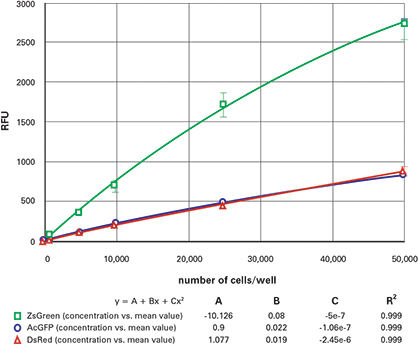 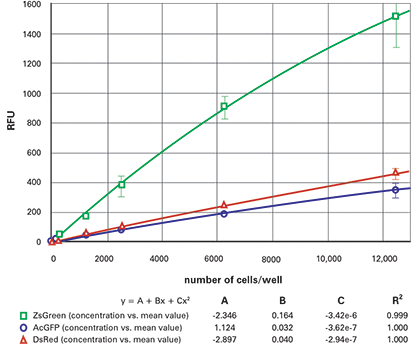 In general, the plots were slightly nonlinear, dropping off at the upper end. We speculate that this might be due to the tendency of cells at high density to migrate up the microplate walls and therefore be out of the beam.

Table 2 gives the estimated lower limits of detection (LLD) for each of the cell lines. The calculation for the LLD was: 3SDBlank/ slope, where SDBlank is the standard deviation of Blank wells (media without cells) and the slope is the slope of the curve at the bottom end. (For the 96-well and 384-well plates respectively, the 10,000 cells/well and 2500 cells/well data points were used, respectively.) The RFU signal and standard deviation of wells containing non-transfected cells were similar to those containing media only. 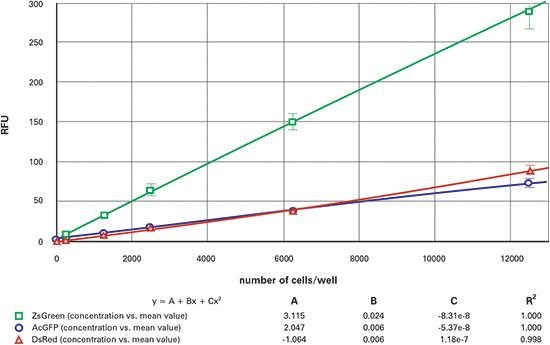 In this particular experiment, ZsGreen and DsRed cell lines had similar limits of detection in bottom-read mode and both were 3 to 4 times lower than the LLD for the AcGFP line. This experiment was performed 3 times and DsRed did not always perform so well. In one experiment, its LLD was similar to that of AcGFP and in the other experiment, its LLD was much higher. We attribute these differences to the fact that the number of passages differed between the cell lines. (With each successive passage, the cells become dimmer.) The DsRed cell line grew more quickly than the others in the early experiments, so in the first experiment, it had 2-4 more passages than the other cell lines, resulting in its apparently poorer performance

Table 3 shows the results from a previous experiment where the culture media was removed and replaced with colorless buffer. The bottom-read results did not change (though the AcGFP LLD seemed to improve), indicating that there was no appreciable loss of cells as a result of the manipulation. Top-read results, however, improved about threefold. These results support the assumption that colored media is partly responsible for the poorer sensitivity in topread mode.

Table 3. Effect of replacing media with colorless HBSS on limits of detection (#Cells/Well) in 96-well microplates in the Gemini EM Reader.

In this experiment, in a 96-well plate, the wells contained various mixtures of cells and the total number in each well was 50,000 cells. Thus a 1:1 mixture contained 25,000 of each cell type and a 1:1:1 mixture contained 16,700 of each cell type. The plate was read at Ex/Em 480/510 (optimal for AcGFP and ZsGreen) and 550/588 (DsRed settings). The observed RFU values were similar to predicted values. The results indicate that AcGFP or ZsGreen can be measured in the presence of DsRed and vice versa (Table 4).

Microplate readers from Molecular Devices can easily detect fluorescent proteins in intact adherent cells. They offer the benefit of tuning the wavelengths to get optimal results for each individual fluorophore. Bottom reading give better sensitivity, though top reading gives usable results, especially for the ZsGreen- and DsRedcontaining cell line. Top-read results for the DsRed cell line can be improved by replacing the media with colorless HBSS buffer.