Nanotechnology is a rapidly developing field that has caught the interest of the scientific community due to its potential applications in biomedical research. Nanomaterials are typically less than 100 nm in diameter, making them small enough to penetrate mammalian cells. Nanomaterials can be synthesized in many shapes, such as rods, tubes, and particles, as well as in varying elemental compositions such as metals, metal oxides, and combinations of these. Their large surface area to volume ratio makes them suitable for surface functionalization, allowing for attachment of targeting or therapeutic molecules. When nanoparticles are delivered systemically, attached targeting molecules enable detection of certain cell populations, such as tumor cells, while attached therapeutic compounds can act on the targeted cells.

The material a nanoparticle is composed of has a specific band gap, or distance between the ground and excited states of its electrons. Generally, an electron exists in its ground state, or lowest energy state. Upon absorption of photons or light energy, the electron moves to its excited energy state. The distance between the ground state and the excited state is known as the band gap. The nanoparticle material absorbs one or more specific wavelengths, with some of the absorbed energy lost as vibrational energy and the remaining excess energy emitted as fluorescent light, returning the electrons to their ground state. A unique spectral signature can be obtained by plotting the relative fluorescence intensity across a range of different excitation and emission wavelengths.

The Spectral Optimization Wizard enables automatic scanning of a user-defined range of excitation and emission wavelength pairs. The resulting fluorescence values for each wavelength pair are plotted as a heat map with a ‘hot spot’ that indicates the wavelength pair producing the highest signal relative to a control. These hot spots can be compared for different samples to identify a spectral shift.

Iron oxide nanoparticles (Fe2O3 NP) were weighed out on an analytical balance at 2 mg in a microcentrifuge tube and suspended in 1 mL of ultra-pure water to create a final stock concentration of 2 mg/mL. This stock concentration was vortexed to disperse the particles. To obtain a final sample concentration of 1 mg/mL, 100 µL of the stock was transferred to a new microcentrifuge tube, and 100 µL of ultra-pure water was added to make a nanoparticle control sample. This 200-µL sample was vortexed and transferred to one well of a black 96-well microplate.

Zinc oxide nanoparticles (ZnO NP) were weighed out on an analytical balance at 3.5 mg in a microcentrifuge tube and suspended in 1 mL of ultra-pure water to create a stock concentration of 3.5 mg/mL. This solution was vortexed and 57 µL of the stock solution was transferred to a new microcentrifuge tube. To this tube, 143 µL of ultra-pure water was added to bring the volume to 200 µL and the final sample concentration to 1 mg/mL. The sample was vortexed and transferred to one well of a black 96-well microplate as a nanoparticle control.

Fluorescence of samples in the 96- well microplate was detected on the SpectraMax i3x Multi-Mode Microplate Reader using the settings shown in Table 1. A preliminary fluorescence spectral scan was performed using an excitation wavelength of 260 nm for Fe2O3 NP and 350 nm for ZnO NP with and without mPEG. Emission was measured from 295 nm to 750 nm at 5 nm intervals for Fe2O3 NP samples, and from 375 nm to 750 nm at 5 nm intervals for ZnO NP samples (Table 1). The microplate was shaken for five seconds using the orbital setting at high speed prior to reads.

Figure 2. Spectral Optimization Wizard settings for nanoparticles. Settings used for both Fe2O3 and ZnO NP samples with and without mPEG. For the ZnO NP samples, a wavelength increment of 5 nm was used.

The Spectral Optimization Wizard was designed to identify a sample’s optimal excitation and emission wavelengths and then use these wavelengths in a subsequent plate read. The software does not automatically save the heat map and its associated fluorescence values as data. However, while the heat map window is still open, this raw data can be copied and pasted by right-clicking on the heat map and selecting ‘Copy Raw Data’, then pasting the data into the desired software. If the data are pasted into a spreadsheet, the excitation and emission wavelengths used in the spectral optimization must be entered manually, as they are not exported automatically with the raw data values. The original heat map image produced by SoftMax Pro Software can be saved for reference by right clicking it and selecting ‘Save Image As’. 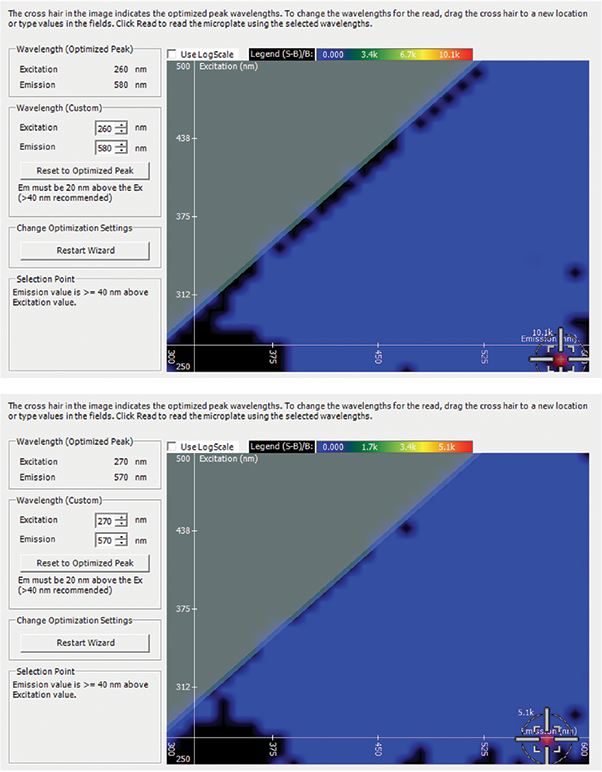 Figure 3. Spectral signature of Fe2O3 NP (top) and mPEG surface functionalized Fe2O3 NP (bottom). The optimal wavelength pair identified by the software appears as a red ‘hot spot’ on each heat map of excitation vs. emission wavelengths. The gray areas of the heat maps represent nonfeasible wavelength combinations that are avoided by the software. Black areas represent readings where fluorescent signal was very close to background values. 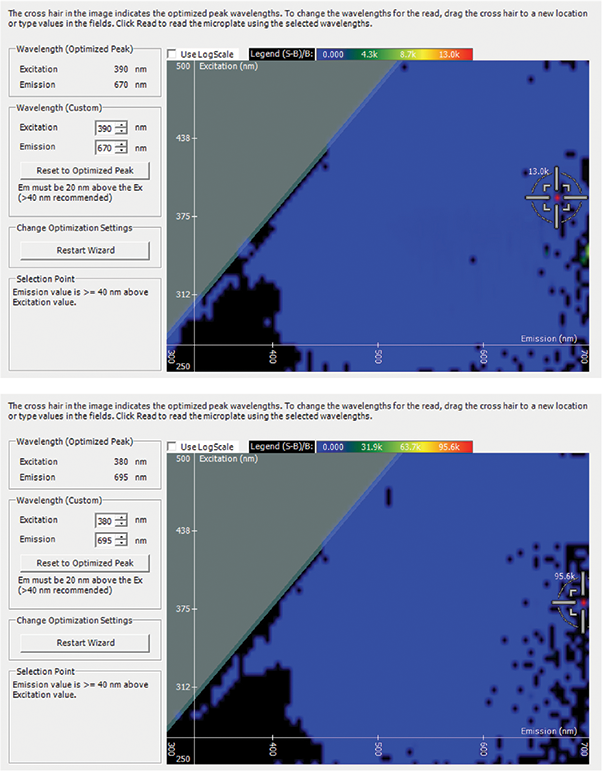 Figure 4. Spectral signature of ZnO NP (top) and mPEG surface functionalized ZnO NP (bottom). Here there was a significant shift in the optimized wavelength pair identified for the non-coated vs. coated nanoparticles.

Table 3. Spectral signatures of FeO and ZnO NP with and without mPEG. Optimized wavelength pairs obtained using the Spectral Optimization Wizard in SoftMax Pro Software are shown. With the addition of mPEG, FeO NP only have a small shift in spectral signature, while ZnO NP exhibit a more robust 25 nm shift with mPEG addition.

The 20 nm shift in excitation and emission wavelengths indicates electrostatic interaction and complexation between ZnO NP and mPEG polymer, which was not observable with Fe2O3 NP in the presence of mPEG. This characterization of nanoparticle and its surface interactions can be detected using the SpectraMax i3x Multi-Mode Microplate Reader and the Spectral Optimization Wizard in SoftMax Pro Software. This technique allows for quality control and assurance when performing surface functionalization of nanoparticles. Additionally, this technique can be extended to assure correct product formation during drug development utilizing nanoparticles as a delivery vehicle of targeting therapeutic compounds.