The assessment of cardiotoxicity is important in the early stages of drug discovery to enable elimination of potentially toxic compounds from further development. This is critical to reduce the inefficiencies and high costs associated with compounds that fail during cardiac safety assessment. There is a growing need for highly predictive in vitro cardiotoxicity assays that use biologically relevant cell-based models and are suitable for high-throughput screening. iPS cell-derived cardiomyocytes are especially attractive cell models because they represent gene expression profiles as well as phenotypic characteristics similar to native cardiac cells. Compounds can interfere with calcium signal oscillation in cardiomyocytes. Calcium signal oscillation reflects changes in cytoplasmic calcium concentration. Use of a calcium sensitive dye in cardiomyocytes shows an increase in fluorescent signal as cytoplasmic Ca2+ concentration increases due to Ca2+ release from the sarcoplasmic reticulum as part of the cell contraction process. Signal decreases as Ca2+ concentration decreases due to active transport of Ca2+ from the cytoplasm back to the sarcoplasmic reticulum as part of the cell relaxation process.

The calcium sensitive dye in the EarlyTox™ Cardiotoxicity Kit makes it possible to evaluate concentration-dependent modulation of calcium peak frequency and illustrate oscillation patterns in Axiogenesis Cor.4U® iPS cell-derived cardiomyocytes using either the FLIPR® Tetra System or the SpectraMax® i3 Multi-Mode Microplate Reader. Identified changes in parameters such as peak frequencies, amplitude, peak width, rise and decay times enable the ability to predict possible toxicity or eliminate compounds from consideration that might otherwise be put forward to medicinal chemistry or to pre-clinical development. Additionally, this method may be used to enable the discovery of compounds that may have a therapeutic effect on cardiomyocytes and identify possible leads for new cardiac drugs. 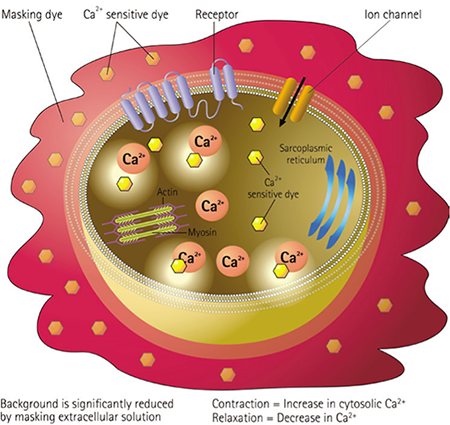 In this assay, human Cor.4U iPS cell-derived cardiomyocytes provided by Axiogenesis, AG, Cologne, Germany were plated at 11,000 total cells per well in a black-walled, clear bottom, 384-well plate coated with fibronectin. Following the Cor.4U protocol, cells were plated just three days prior to the experiment and incubated at 5% CO2, 37°C. The cells were fed every day with Cor.4U culture medium.

By the third day, the cells had formed a lawn, established gap junctions, and were beating synchronously. Two hours before assay, the cells were fed with fresh culture medium and returned to the incubator. Dye loading buffer was prepared by diluting EarlyTox Cardiotoxicity Kit dye (Molecular Devices #R8210) in 10 mLs Cor.4U culture medium and warmed to 37°C to avoid slowing the beating of the cardiomyocytes upon addition. 25 μL dye was added to 25 μL cells in the plate. The plate was returned to the 5% CO2, 37°C incubator for two hours.

During dye loading, compound plates were made containing various cardioactive compounds in DPBS buffer at 5X final concentration. The compound plate was warmed to 37°C prior to addition to minimize temperature effects upon the cells. 12.5 μL of 5X compound was added to each well either on line during detection on the FLIPR Tetra System or off line before detection on the SpectraMax i3 reader. In the FLIPR Tetra System assay, data for analysis was collected three minutes post compound addition. ScreenWorks® Peak Pro Software was used to calculate the parameters and GraphPad Prism was used to plot signal traces and curves.

Cardiomyocyte assay on the SpectraMax i3 Multi-Mode Microplate Reader

For the assay read on the SpectraMax i3 reader, compounds were added off line one hour before reading. SoftMax® Pro Software was used to exhibit signal traces, calculate parameters, and plot curves.

EarlyTox Cardiotoxicity dye tracks calcium signal change in cardiomyocytes. Signal traces during cell beating show an increase in fluorescent signal as cytoplasmic Ca2+ concentration increases due to Ca2+ release from the sarcoplasmic reticulum as part of the cell contraction process. Signal decreases as Ca2+ concentration decreases due to active transport of Ca2+ from the cytoplasm back to the sarcoplasmic reticulum as part of the cell relaxation process. An example of the change in fluorescent signal recorded on the FLIPR Tetra System as the cardiomyocytes beat together in a control well is shown in Figure 2. 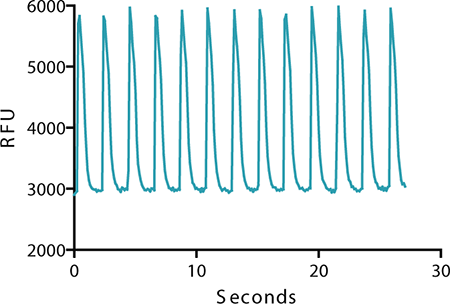 β adrenergic GPCRs have been found in cardiomyocytes1 . Agonists and antagonists can have a positive or negative effect respectively upon the beat rate and signal characteristics of the cells. An example of a non-specific agonist, isoproterenol, is seen in Figure 3. The beat pattern is shown as well as the change in beat rate. As the concentration of isoproterenol added per well increased, beats per minute at the three-minute time point increased from 28 to 50. Propranolol, a β adrenergic antagonist clinically prescribed to arrhythmic patients, slowed the beat rate of iPS cell-derived cardiomyocytes (Figure 4). In addition, the amplitude of the transient calcium signal was reduced.

Cisapride was a drug previously used to treat gastroesophageal reflux disease. It was withdrawn from the market in the US because it is also a hERG blocker that blocks the hERG channel in the heart. It produced a distinctly different beat pattern (Figure 5). The beat rate was drastically reduced when compared to the control in Figure 2. In addition, the peak width at 10% amplitude calculated in ScreenWorks

Figure 5. Cisapride is a hERG blocker. (5a) Cisapride causes a distinctly different beat pattern compared to the control in Figure 2. (5b) Peak width at 10% amplitude (sec) increases as Cisapride concentration increases. All measurements were taken 3 minutes post compound addition.

PeakPro Software increased with increase in concentration. Detecting the changes in calcium signal in beating iPS cellderived cardiomyocytes caused by hERG blockers is an important tool in the early identification of safety related compounds.

In another experiment, Cor.4U iPS cellderived cardiomyocytes were loaded with dye and treated with lidocaine for one hour. Lidocaine is a sodium channel blocker that slows the beat rate of cardiomyocytes with increased concentration. The transient calcium signals were read for 40 seconds on the SpectraMax i3 reader. Each well was read individually to determine the rate of cell beating (Figure 6). Although the cells in the control wells were beating more slowly than the control cells in the assay on the FLIPR Tetra System, it was still possible to determine the change in BPM with increased concentration of lidocaine. 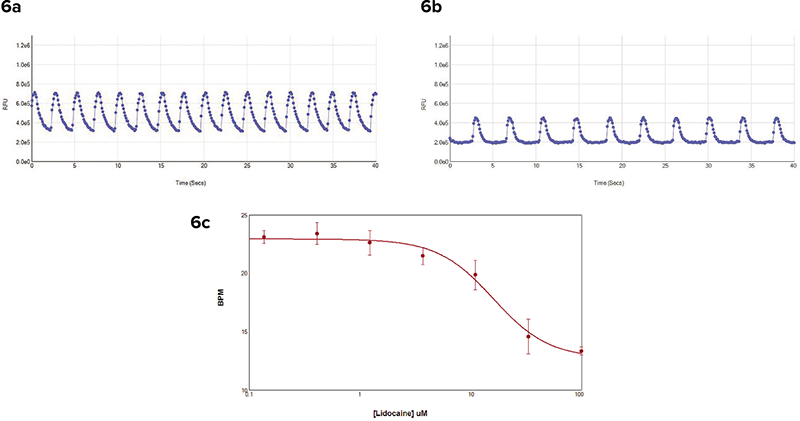 The EarlyTox Cardiotoxicity Kit provides a fast, simple, and reliable assay to predict compound toxicity and efficacy during lead optimization. Leveraging this proprietary kit with Cor.4U iPS cell-derived cardiomyocytes on the FLIPR Tetra System or the SpectraMax i3 reader, researchers can study functional profiles in a biorelevant cardiotoxicity assay, minimize non-specific effects of dye on calcium signaling, and scale assays for throughput requirements.