Cav1.3 is a L-type voltage-gated calcium channel and an important therapeutic target for drug discovery. It has been shown that a number of drugs exhibit statedependent effects on Cav1.3 channels1 , meaning the potency of these drugs vary in response to the membrane voltage (Vm) and the consequent change of channel states (open, close, inactivated). As this likely provides highly-desired selectivity for pathologically over-activated Cav1.3 channels, there is a growing demand for the development of high-throughput assays to evaluate channel blockers under different states.

Current screening methodologies for this channel utilize either electrophysiology or fluorometric methods using potassium challenge to modulate membrane potential, yet both approaches have significant limitations. Electrophysiology directly controls Vm, but it is invasive in nature and not much amenable to highthroughput assays, whereas fluorometric assays bear poor physiological relevance and is not reversible.

To address these limitations, we report here a novel solution using optogenetic methods to control Vm via channelrhodopsin-2 (ChR2).2 ChR2 functions as a light-gated non-selective cation channel, primarily permeant to sodium (Na+ ) ions. Upon activation by blue light (470 nm), ChR2 mediates Na+ influx which elicits prolonged membrane depolarization driving the Cav1.3 channel first to the open state and then over time to the inactivated state. The membrane potential repolarizes following the termination of light, which drives the Cav1.3 channel back to its resting state.

In this study, we demonstrate the novel utility of optogenetic tools to control Vm in a reversible and precise fashion for screening state-dependent calcium channel blockers using the FLIPR Tetra® System.

A powerful application of optogenetics is controlling Vm using light-sensitive actuators. In this study, the light-sensitive ChR2 protein from C. reinhardtii is used to control Vm as the basis of a highthroughput assay for state-dependent Cav1.3 blockers. Specifically, the ChR2D156A mutant is activated by blue light (470 nm) from the LEDs on the FLIPR Tetra System, which induces a robust and prolonged membrane depolarization due to its permeability to Na+ , and extended time constant for the open state of about 6.9 minutes3 . As a result of depolarized Vm, the Cav1.3 channel first opens allowing Ca2+ ions to enter into the cell, (Figure 1) and over time transits to the non-conductive inactivated state (Figure 2). The kinetic changes in intracellular calcium are monitored using the FLIPR Calcium 6 Assay Kit on the FLIPR Tetra Instrument. 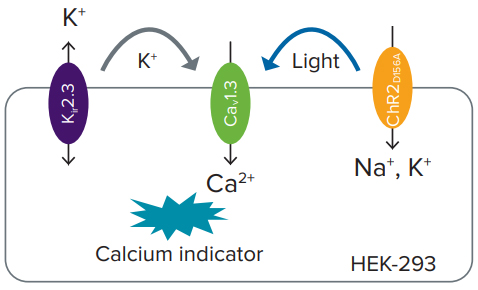 Figure 1. HEK-293 cells transfected with Kir2.3, Cav1.3, and ChR2. The influx of calcium ions through Cav1.3 is obtained upon depolarization of Vm which can be achieved either with a high K+ application, or with light stimulation of ChR2. 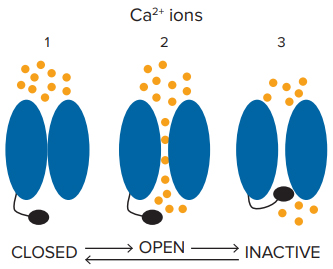 Figure 2. The Cav1.3 channel cycles among different states, depending on Vm. When the membrane potential is hyperpolarized, the channel is in its “closed” resting state. Upon Vm depolarization, the channel opens allowing Ca2+ ions to enter the cell, then immediately progresses to the “inactivated” refractory state. Upon Vm repolarization, the Cav1.3 channel recovers from the inactivation state and returns to the closed state, being then ready to respond again to Vm depolarization stimulus.

Control of Vm by ChR2

As a first step to validate the control of Vm by ChR2, FLIPR Membrane Potential Dye (Ex 530 nm/Em 565 nm) is used to measure change in fluorescent signal as a result of change in Vm. HEK-293 cells transfected with ChR2, Kir2.3, and Cav1.3 are incubated with FLIPR Membrane Potential dye following the standard protocol, in the presence of all-trans retinal co-factor. Using the FLIPR Tetra System, membrane depolarization is induced by stimulating the ChR2 channel with light pulses from the blue LEDs. A second protocol is simultaneously performed which excites the membrane potential dye and measures the change in fluorescent emission over time. The membrane depolarization is reflected by the increase in fluorescent signal. After the termination of the first period of blue light stimulation, ChR2 channels progress to the closed state, allowing Vm to repolarize, resulting in decreased fluorescent signal over time.

HEK-293 cells transfected with ChR2, Kir2.3, and Cav1.3 are first loaded with FLIPR Calcium 6 dye, in the presence of all-trans retinal co-factor. Using the FLIPR Tetra System, the cells are pulsed with blue light to stimulate ChR2 and the following change in fluorescence reflects calcium entry into cells through Cav1.3. In subsequent experiments, a dual-pulse protocol was employed, where the second light pulse was applied after varying time intervals after the first pulse to study recovery of Cav1.3 from inactivation.

Control of Cav1.3 by potassium challenge

As a reference, the standard method of analyzing Cav1.3 channel activity by potassium challenge is performed on the same cell line. When high potassium is applied extracellularly, the membrane potential depolarizes allowing the Cav1.3 channel to open and calcium ions to enter the cell (Figure 1). Over time, Cav1.3 reaches an inactive, non-conductive state. FLIPR Calcium 6 dye is used to measure the increase in intracellular calcium. This method requires the application of high concentration of K+ to the cells which is non physiological and can have many “off-target” effects. In addition, such application is irreversible as the potassium ions can’t be removed from the well.

To validate the utility of optogenetics in pharmacological assays, a set of experiments were performed using the state-dependent inhibitor isradipine to block the Cav1.3 channel and to analyze IC50 results at both the closed and inactivated states. Three methods of activating the Cav1.3 channel including optogenetics, high potassium addition based on Kir2.3, and patch clamp are compared to determine isradipine IC50 values at both states

Control of Vm by ChR2

Control of membrane potential by lightactivated ChR2 was validated by incubating ChR2 transfected HEK-293 cells with FLIPR Membrane Potential dye. Pulses of blue light from the FLIPR Tetra System LEDs resulted in membrane depolarization and a 3-fold increase in signal from the FLIPR Membrane Potential dye (Figure 3a). Recording the membrane potential signal over time showed that fluorescent signal returned to background levels after about 30 minutes from the initial blue light stimulation as the membrane repolarized. This data suggests that when blue light stimulated ChR2 to open, Vm was depolarized first and over time Vm repolarized as the ChR2 channel closed (Figure 3b), accordingly to its time constant of 6.9 minutes

Transfected HEK-293 cells were incubated with FLIPR Calcium 6 dye. Pulses of light from the blue LEDs triggered an increase in fluorescent signal as calcium ions entered the cell (Figure 4a). Subsequent experiments (Figure 4b) in which the cells were subjected to a dual-pulse protocol were used to identify the timedependence of Cav1.3 channel recovery from inactivation. After a 10 min interval, half the calcium flux signal was recorded. After a 45 minute interval, nearly 100% of the signal was recorded. The data suggests that 10 minutes after the first light pulse, half the channels were still in the inactivated state thus resulting in 50% of maximum calcium signal.

Figure 4. (A) ChR2 induced Cav1.3 response after blue light stimulation. The signal trace from the FLIPR Tetra System records the increase in fluorescence of FLIPR Calcium 6 dye as calcium enters the cell though Cav1.3. (B) Cav1.3 recovery from the inactivated state. A dual-pulse protocol was applied here, where the first pulse of blue light was applied at t = 0, then cells received a second pulse after incremental intervals as indicated and calcium flux was measured. Data showing half the initial calcium signal suggests that the half-inactivated state of the channel occurs with the second light pulse delivered 10 minutes after the first stimulation.

To control the Cav1.3 channel state with K+ , the transfected HEK-293 cell line was incubated in FLIPR Calcium 6 dye loading buffer with increasing potassium concentrations from 4 mM to 75 mM for one hour at 37°C resulting in different membrane potentials (Vm). Then a high K+ concentration of 75 mM was added during detection of calcium signal on the FLIPR Tetra System. Representative calcium signal responses are shown in Figure 5a. A K+ dependent inactivation curve plotting the K+ loading concentration vs. the signal from the FLIPR Calcium 6 dye revealed the concentration of K+ to induce 50% of maximum Ca2+ signal is at 22 mM K+ (Figure 5b), suggesting that half the channels were in the inactivated state in this K+ loading condition.

Figure 5. (A) Cells loaded with FLIPR Calcium 6 dye in different [K+ ] to induce different starting voltages. 75 mM K+ added during detection of calcium signal on FLIPR Tetra System. (B) K+ inactivation curve. By incubating the cells in dye with 22 mM K+ , 50% of the channels are in the inactivated state.

Isradipine, an anti-hypertension drug that may also be useful in slowing the progression of Parkinson’s disease, was chosen for this study due to its known state-dependent effect on Cav1.3. Using the optogenetic protocol with ChR2, HEK-293 cells expressing Cav1.3 were incubated with FLIPR Calcium 6 dye for one hour at 37°C, in the presence of different concentrations of isradipine. Blue light pulses were given on the FLIPR Tetra System and increase in fluorescent signal with calcium influx at the closed state was measured. After 10 minutes, a second pulse of blue light was given recording the change in fluorescence with calcium influx at the inactivated state. Only half of the original calcium signal was seen. Results are shown as % Cav1.3 response on the graph in Figure 6a. Isradipine IC50 curves from experiments following the high K+ protocol are shown in Figure 6b. Based on earlier potassium experiments, 4 mM K+ or 22 mM K+ was added to the FLIPR Calcium 6 dye loading buffer to induce closed and inactivated states, respectively. 75 mM K+ was added during detection of calcium signal on the FLIPR Tetra System. In Figure 6c, IC50 curves of isradipine block of Cav1.3 at both the closed and inactivated states using a patch clamp protocol are shown. 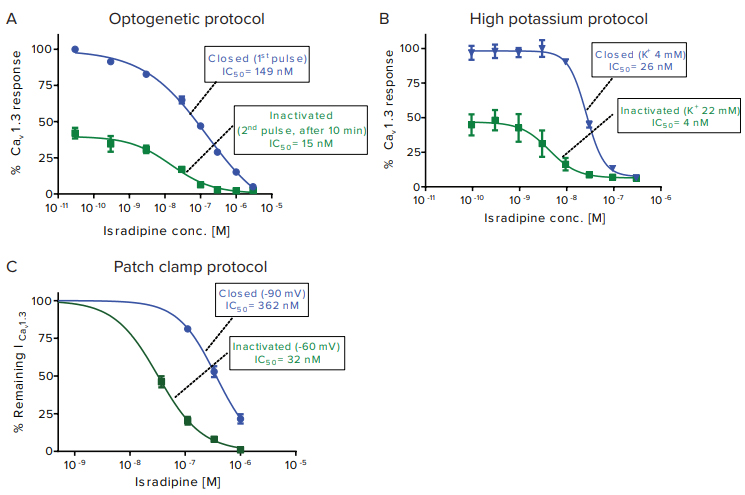 A comparison of isradipine IC50 values at both closed state and inactivated state including historical patch clamp results is shown in Table 1. An approximately 10-fold left shift in IC50 values at the inactivated state of Cav1.3 compared to the values at the closed state is preserved with all methods. This is important because compound effects upon ion channels can have different clinical implications at closed and inactivated states. With the optogenetic protocol, the IC50 values are closer to the IC50 values obtained with “gold standard” electrophysiology methods. The “ratio block” value obtained with optogenetics is very similar to that obtained with electrophysiology methods suggesting high biorelevance. Unlike electrophysiology assays, the cells in the optogenetics assay are intact at the end of the experiment. In addition, the light-driven optogenetic protocol is reversible, a highly desirable feature for flexible assay protocols.

Table 1. Summary of isradipine IC50 results at both closed and inactivated states. The optogenetic protocol results are the closest to electrophysiological and literature results.