Potassium-chloride transporter member 5 (SLC12A5, or KCC2) is one of nine cationchloride cotransporters (CCCs) encoded by the SLC12 family of genes, and is the only CCC transporter preferentially expressed in neurons. KCC2 plays a critical role in the correct functioning of the central nervous system where it is pivotal in maintaining neuronal intracellular Cl– concentration ([Cl–] i ). KCC2 is involved in the control of numerous neuronal processes and its impaired activity has been identified in epilepsy, neuropathic pain and spasticity following spinal cord injury1 . This suggests that positive modulators of the activity or expression of KCC2 may provide effective therapy for neurological conditions arising from defects in KCC2 functionality.

The FLIPR® Potassium Assay Kit contains a novel, highly-sensitive thallium (Tl+ ) indicator dye that produces bright fluorescence upon binding to Tl+ introduced through potassium channels. The intensity of the signal is proportional to the number of open potassium channels on the cells; therefore, it acts as a surrogate indicator of potassium ion channel activity. The kit also employs Molecular Devices proprietary masking dye to reduce background fluorescence resulting in an improved signal/background ratio. As Tl+ is also transported by cation-chloride cotransporters, the FLIPR Potassium Assay Kit can be used to easily assess the effect of compounds on KCC2 activity by measuring the initial rate of KCC2-mediated Tl+ transport/influx.

The assay kit’s Tl+ indicator dye has an expanded signal window compared to non-homogenous assays. BTC-AM is a Ca2+ indicator that has also been used for monitoring potassium channel since Tl+ ions also enhance the fluorescence of BTC. During the dye-loading step, the Tl+ indicator dyes enter the cells as acetoxymethyl (AM) esters by passive diffusion across the cell membrane. Cytoplasmic esterases cleave the AM esters and release the active fluorogenic forms. A proprietary extracellular masking dye is included with the assay kit to reduce background fluorescence (Figure 1). To activate the potassium-chloride transporter, the cells are stimulated with a mixture of K+ and Tl+ in the presence or absence of test compounds (e.g. KCC2 inhibitors). Under the assay conditions used, the increase in fluorescent signal represents the influx of Tl+ into the cell specifically through the cotransporter, and therefore represents a functional measurement of the cotransporter activity. Modulation of the cotransporter activity is achieved by the inclusion of KCC2 inhibitors. 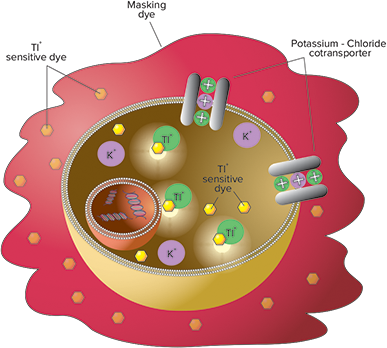 HEK293T (ECACC Cat. # 12022001) cells were grown to 80–90% confluence in T75 flasks containing growth medium (DMEM supplemented with 10% FBS and 2 mM L-Glutamine). Cultures were maintained at 37°C in the presence of 5% CO2. Cells were passaged every 3–4 days at a ratio of 1:6. Two days before the assay, cells were transiently transfected with human KCC2 (hKCC2) using Lipofectamine 2000 (Thermo Fisher Cat. # 11668027) according to the manufacturer’s instructions. The transfection mixture was mixed with growth medium, plated directly into a 96-well, black-walled, clear bottom plate at 10,000 cells/well and incubated at 37°C and 5% CO2 for 48 hours.

Growth medium was removed from the plates which were then incubated with either FLIPR Potassium Assay Kit or BTCAM (2 µM) for one hour at 37°C in the dark. The loading buffer contained 10 µM bumetanide to reduce the endogenous NKCC Tl+ influx/transport signal, and 0.1 mM ouabain, a Na+ /K+ -ATPase blocker, to inhibit ATP-dependent sodium-potassium exchange across the cell membrane. Following the dye loading step, cells incubated with BTC-AM were washed to remove excess dye. The KCC2 inhibitors were added and incubated for the last 45 minutes of the dye loading time (FLIPR Potassium Assay Kit only). Optimized stimulus buffer (9 mM K+ / 0.9 mM Tl+ ) was added to the well during detection on the FLIPR® Tetra System using the 470–495 nm excitation LEDs and 515–575 nm emission filter. Data files were imported into SoftMax® Pro Data Acquisition and Analysis Software for subsequent analysis using the Import Feature (Figure 3), available for SoftMax Pro 6.4.1 or higher. The initial rate (Vmax in units per second) was calculated from the first 10 seconds of data post stimulus addition.

After loading hKCC2-transfected or mocktransfected HEK293 cells with the novel FLIPR Potassium Assay Kit or BTC-AM, we measured the increase in fluorescence triggered by the addition of external Tl+ during detection on the FLIPR Tetra System. The hKCC2-driven FLIPR signal exhibits a rapid increase over the first ten seconds after Tl+ addition in cells loaded with the FLIPR Potassium Assay Kit, followed by a slower increase and eventually a plateau phase. The increase was significantly higher (P < 0.001; Student’s t-test) in hKCC2- expressing cells, compared to mocktransfected cells as shown in Figure 4. The average Z factor was calculated as 0.60 ± 0.05 indicating a robust assay2. In contrast, with BTC-AM loaded cells the signal was much slower to develop, showed a large degree of variability and the magnitude of the signal was far lower. For these reasons, no further comparisons between the assay kit and BTC-AM were made. 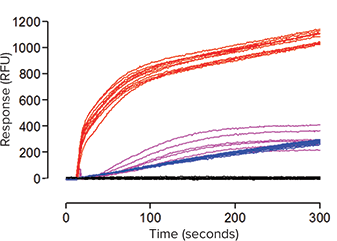 A series of experiments were then carried out with hKCC2-expressing cells loaded with the FLIPR Potassium Assay Kit to assess whether the Tl+ influx assay could be used to detect modulators of hKCC2 activity. In each 96-well plate, cells were treated with either vehicle control or 30 µM R-(+)-DIOA (an alkanoic acid that has been shown to be a potent and selective inhibitor of K+ /Cl- cotransporters). As seen in Figure 5, the resultant signals from the K+ /Tl+ -evoked increase in fluorescence are very consistent from well to well, and the separation between the control and R-(+)-DIOA signals is significant (P < 0.001; Student’s t-test). 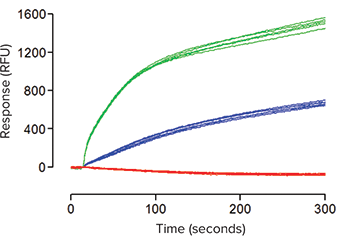 Figure 5. Representative fluorescence traces obtained on the FLIPR Tetra System in hKCC2- transfected cells loaded with the FLIPR Potassium Assay Kit. Data show the effect of buffer only addition (–) or Tl+ addition in the absence (–) or presence (–) of 30 µM R-(+)-DIOA. 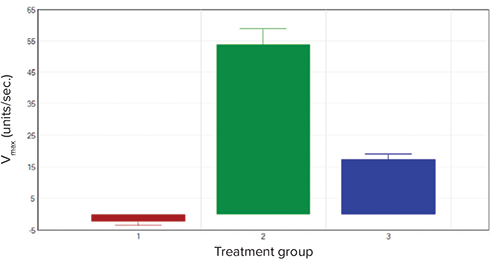 We have shown that the FLIPR Potassium Assay Kit can be used to measure the functional activity of the hKCC2 cation-chloride cotransporter using a homogeneous, no-wash protocol. The assay kit displayed a large assay window and excellent reproducibility, and was able to successfully detect a known modulator of hKCC2 activity. Compared to traditional dyes such as BTC-AM, the simplified protocol and robust assay quality, in combination with the high-throughput capability of the FLIPR Tetra System, provides a powerful solution to screen for modulators of the hKCC2 cotransporter.