Voltage-gated ion channels are present in the excitable cell membranes of heart, skeletal muscle, brain and nerve cells. Blocking or modulating such channels can have a therapeutic effect or may interfere with normal cell function. As a result, compounds that affect voltage-gated ion channels are important targets in drug discovery. Cardiac NaV1.5 channels are classified as “Tetrodotoxin (TTX)-resistant.”1 The pharmacological significance of the NaV1.5 channel is that it is a target for the action of antiarrhythmic drugs and is also blocked by local anesthetics such as lidocaine2.

FLIPR® Membrane Potential (FMP) Assay Kits provide a rapid and reliable fluorescence-based method to detect changes in membrane potential brought about by compounds that modulate or block voltage-gated ion channels. It has been previously shown that interaction between test compounds and membrane potential dyes may cause changes in fluorescence response leading to altered estimation of compound activity.4

Molecular Devices has developed two different no-wash formulations of FLIPR Membrane Potential Assay Kits: Blue and Red. Each kit uses the same proprietary indicator dye, combined with different quencher to maximize cell line/channel/compound applicability while eliminating causes of variability in the data. Depending on the chemical properties of compounds in a library, differences in compound auto-fluorescence, or effect of dye on cell type or receptor, one kit may provide better response than the other. During assay development, optimal compound response can be empirically determined by testing both kits with a representative sample of the library to be screened. In this application note, CHL cells transfected with the cardiac NaV1.5 channel are used to demonstrate differences in membrane potential assay functionality with tetrodotoxin and lidocaine and show optimization results with both the FLIPR Membrane Potential Red and Blue Assay Kits on the FLIPR Tetra® System.

To create 384-well assay plates, NaV1.5 cells were trypsinized, re-suspended in culture media, and plated at 12,500 cells/well in 25 μL per well in black-wall, clear-bottom, 384-well plates. Microplates were incubated overnight at 37°C in 95% humidity, and 5% CO2.

To prepare the membrane potential assay, dye-loading buffer for two plates was prepared by completely dissolving the contents of one FMP Red Assay explorer-kit reagent vial and one FMP Blue Assay explorer-kit reagent vial, each with 10 mL assay buffer. Cell plates were removed from the incubator, and 25 μL of red dye-loading buffer was added directly to each well in the plate without removing culture media or washing. Dye-loaded plates were incubated for 30 minutes at 37°C prior to assay on the FLIPR Tetra System. The FLIPR Tetra System was prepared using the setup parameters, as listed in Table 1. In polypropylene 384-well plates, a concentration-response series containing 5X concentrations of veratridine, a voltage dependent sodium channel opener, and 5X concentrations of sodium channel blockers lidocaine, and TTX, were prepared. On the FLIPR Tetra System, veratridine was added to a NaV1.5 cell plate to open the sodium channel and record the change in fluorescence as the cell membranes depolarized. The effective concentration for an 80% maximal response (EC80) for veratridine was determined. Offline, 12.5 μL of 10X channel blocking compounds were added to additional dye-loaded cell plates and incubated at room temperature for 15 minutes. On the FLIPR Tetra System, 5X veratridine was added at EC80 concentration, and the change in fluorescence was recorded during membrane depolarization. After the assay was complete, the IC50 concentrations of lidocaine and tetrodotoxin were determined. Results were graphed using GraphPad Prism 6 graphing software.

In an electrophysiology assay, voltage is applied to the cell membrane to drive the sodium channel into its open state followed by a rapid movement into the inactivated state. By comparison, in membrane potential fluorescence assays, veratridine is used to hold the sodium channel in its open state, preventing inactivation through binding to site two of the six topologically separated toxin binding sites that have been described.5 Rapid influx of Na+ into the cell subsequently depolarizes the membrane leading to an increase in fluorescence. As shown in Figure 1, comparison of the cellular response to veratridine using the FMP Red and Blue Assay Kits is similar. EC50 concentration using the FMP Red Assay Kit is slightly right-shifted at 26.6 μM compared to 20.6 μM with the FMP Blue Assay Kit.

Figure 1. Nav1.5 channel response to veratridine. The EC80 concentration was determined to be 33 µM and veratridine was used as the voltage channel opener in the blocking assay.

Tetrodotoxin (TTX) is a potent sodium channel blocker isolated from Japanese puffer fish. A 5X dose-response series is added to the NaV1.5 cells to block channel opening 15 minutes prior to addition of the EC80 dose of veratridine. Results showed that FMP Red IC50 was 6.2 μM and FMP Blue IC50 was 6.3 μM. The change in fluorescence was equivalent between FMP Assays (Figure 2). In addition, Z factors6 for FMP Red Assay Kit were 0.68 and 0.78 for the blue Assay Kit. A dose concentration response curve for TTX collected using an electrophysiological assay, generated using the IonWorks® Quattro System from Molecular Devices (Figure 3), shows an IC50 value of 2.4 μM. The membrane potential assay results are similar to published conventional patch-clamp data.1 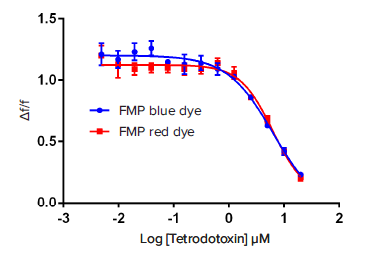 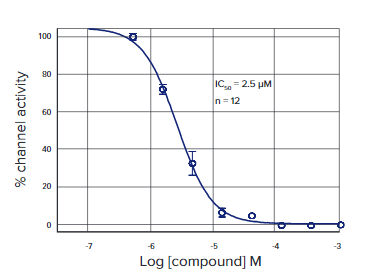 Figure 3. Tetrodotoxin concentration-response curve by electrophysiological assay. Dose-response curve for TTX using an electrophysiological assay. An IC50 value of 2.4 μM was obtained using an IonWorks HT instrument. The single hole per well PatchPlate™ substrate was used and 12 wells were pooled for each data point. Mean ± SD of the fraction of current remaining after compound addition is plotted.

Lidocaine is a local anesthetic that works by blocking sodium channels in a use dependent manner. Use dependent inhibition is seen in IonWorks electrophysiological data in Figure 4, Panel A comparing currents from Pulse 1 to Pulse 10 and showing pulse train and raw Na+ currents. Dose-response curves for lidocaine are shown in Figure 4, Panel B. IC50 values measured at Pulse 1 vs. Pulse 10 are 886 μM and 262 μM, respectively. Evidence of use dependence is present because, as the pulse train progresses from Pulse 1 to Pulse 10, the closed, open, and inactivated states are cycled and the cumulative amount of time that lidocaine is exposed to the open and inactivated state increases. Increased exposure to lidocaine manifests itself as a leftward shift in the measured dose-response curve for Pulse 10.

Figure 4. Measuring use dependence. (A) Voltage pulse protocol used to measure use-dependence (left). A ten-pulse protocol is used to elicit currents from a holding potential of -100 mV to the test potential of -20 mV. Raw Na+ current traces for Pulse 1 (top right) and Pulse 10 of a pulse train voltage protocol. Data was collected using an IonWorks Quattro™ instrument running in Population Patch Clamp™ (PPC) mode. PPC measures the average current from the cells sealed to 64 holes present in each well. Each data point represents the current in a single PPC well showing the fraction of current remaining after compound addition is plotted

The FLIPR Membrane Potential Assay Kit results in Figure 5 show that the FMP Red IC50 is approximately 52.4 μM and FMP Blue IC50 is approximately 135.6 μM. Z’ factors were equivalent between the FMP Red Assay Kit and FMP Blue Assay Kit. Higher potency measurements in this assay is expected compared to the electrophysiology assay because veratridine locks the channel in the open conformational state, maximizing the exposure of the channel to lidocaine and thus increasing its apparent potency. Follow-up screening by automated patch clamp methods on compounds of interest identified in the FLIPR assay is recommended.

Figure 5. Modulation of Nav1.5 channel in CHL cells by lidocaine. Comparison of lidocaine IC50 curves. Note that, due to use dependence in the NaV1.5 channel, IC50 values from the FLIPR Membrane Potential Assay Kits are left-shifted when compared to patch-clamp results shown in Figure 4.

Veratridine can be used instead of voltage to open sodium channels as part of a high throughput membrane potential screening strategy to identify modulating compounds. Compared to the IC50 value at Pulse 1 in the electrophysiology assay, IC50 values of lidocaine in FMP assays are much smaller, which is consistent with previous publications and suggests most NaV1.5 channels in CHL are not at closed state. With two kit options available, it is possible to optimize a membrane potential assay to provide the best results for specific cell types or compound classes. In this study, both FLIPR Membrane Potential Red and Blue Assay Kits provided good results with veratridine, as well as with tetrodotoxin and lidocaine.