Cellular transformation/tumorigenicity assays using cultures of cells in semi-solid media (soft agar or Matrigel) has been well established for cancer research1,2,5. The assay requires cells to grow in an anchorage independent manner, which is a hallmark of cancer cells. Compared with adherent cells grown in 2D monolayers, 3D growth conditions are believed to more accurately reflect the natural environment of cancer cells and span the gap between 2D cultures and animal studies3,5. Importantly, 3D assays correlated better with tumorigenicity in animals, e.g. mouse xenografts5. The growing interest in developing methods for personalized medicine, in which tumor cells from individual patients are tested for sensitivity to a panel of drugs4, has led to a need for more relevant, time-sensitive studies.

3D assays were formerly labor-intensive and inconsistent due to the subjective definitions of colonies and, non-suitable for high-throughput screening. In this study, we describe a method compatible with highthroughput screening, in which compound effects on cell growth in semi-solid media were measured and quantitated using high-content imaging and 3D analysis.

To prepare spheroid cultures in semi-solid media, human colon carcinoma HCT116 cells were pre-mixed with a solution of 4.25 mg/mL cold Matrigel (Corning) diluted in growth media and plated into 96-well half-area plates (Greiner) at a density of ~500 cells/well for a total volume of 25 μL. The plate was incubated for 30 minutes at 37°C to solidify the gel, followed by the addition of 25 μL of media. Within 24-48 hours, spheroid colonies formed in each well.

The resulting spheroid cultures were treated with anti-cancer compounds for 5 days. Compounds were diluted in media at 2X concentrations and 25 μL of a 6 point dilution series was added to triplicate wells. On day 3, we added fresh compound by exchanging half the media with 1X compound dilutions. At the conclusion of treatment with test compounds, cells were stained with a mixture of two dyes: final concentration 1 μM calcein AM and 5 μM Hoechst 33342 (Life Technologies). Dye solutions were prepared at 3X concentration and added directly to media without aspiration and incubated for 2 hours prior to imaging. In an alternative assay, cells were fixed for 1 hour using a 4% formaldehyde solution, washed 3x with PBS by removing half of the volume each time. Then the cells were stained with 5 μM Hoechst 33342 and 0.06 μM AlexaFluor-488 Phalloidin (Life Technologies).

Images were acquired using ImageXpress® Micro Confocal High-Content Imaging System, with a 20× Plan Fluor or 10× Plan Fluor objectives (Figure 1). A z-stack range of 100-150 μm was acquired with a series of 11-20 z-slices separated by 5-10 μm (for 10x magnification) or 2-5 μm (for 20x magnification). Two sites were imaged per well and all individual z-slices, as well as the 2D maximum projection image for each z-stack, were saved for 3D analysis (Figure 2).

Figure 1. Maximum projection image of spheroids in Matrigel stained with Hoechst and AF488-phalloidin. 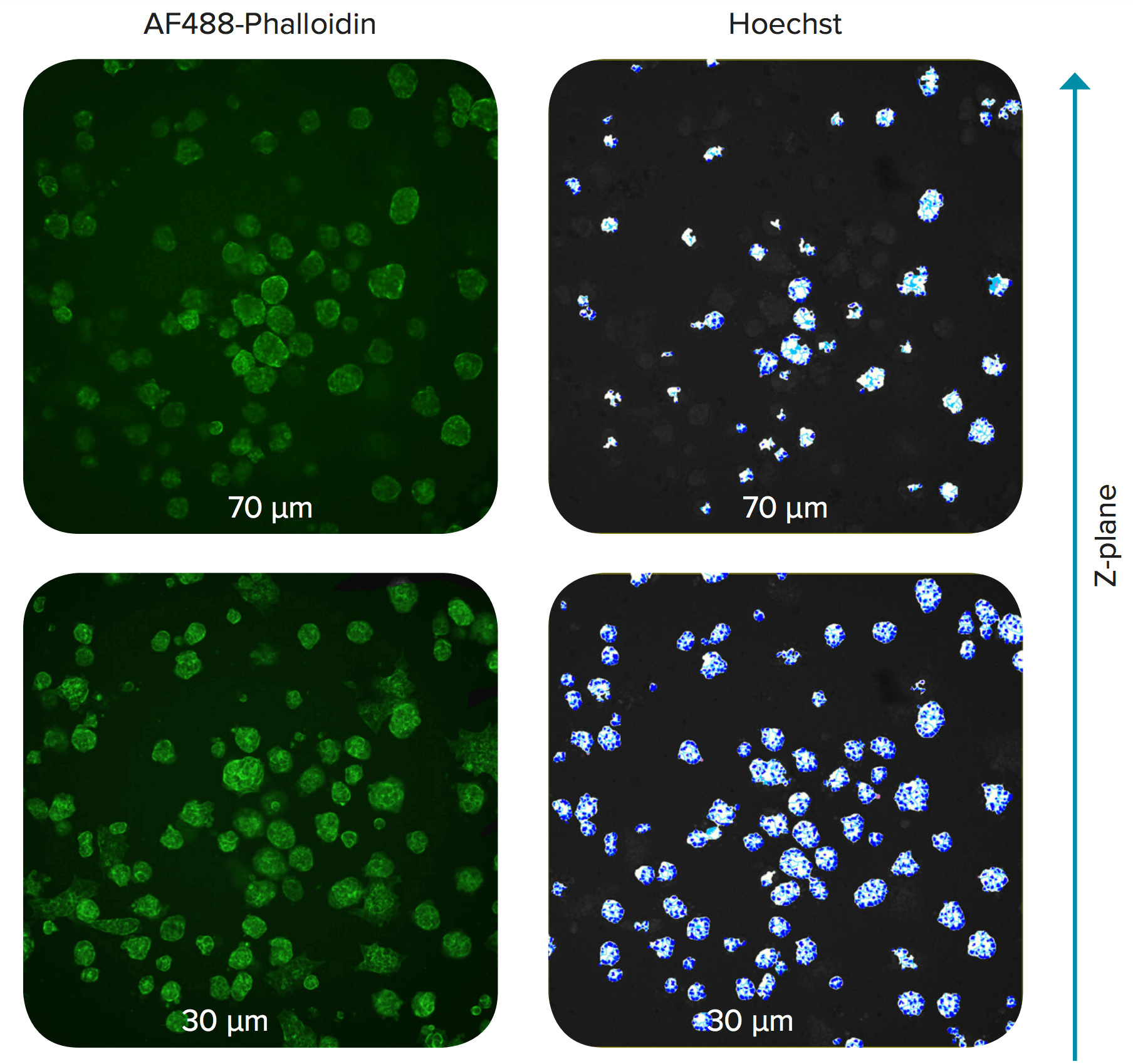 Figure 2. Z-planes of spheroids in Matrigel. The spheroids were stained with Hoechst and AF488- Phalloidin. Distance from the bottom of the well is indicated.

Images were analyzed using the 3D analysis module within the Custom Module Editor of MetaXpress® High- Content Image Acquisition and Analysis Software. Spheroids and individual cells were defined based on size and intensity. Then, spheroid size and phenotype were characterized by volume, diameter, and fluorescence intensities of cellular markers. Multi-parametric outputs were generated using a customized analysis module (Figure 3) and the readouts for each individual spheroid included measurements for nuclear count, size, volume, intensity, live cells per spheroid, whole cell volume and diameter, spheroid diameter, and average intensities of cellular markers (calcein AM, Phalloidin, or Hoechst). The readouts described above can be reported per individual object (spheroid) or averaged per well. Additional sites per well can be acquired to increase the number of cells scored. IC50 values were determined using a 4-parameter curve fit (Figure 4). 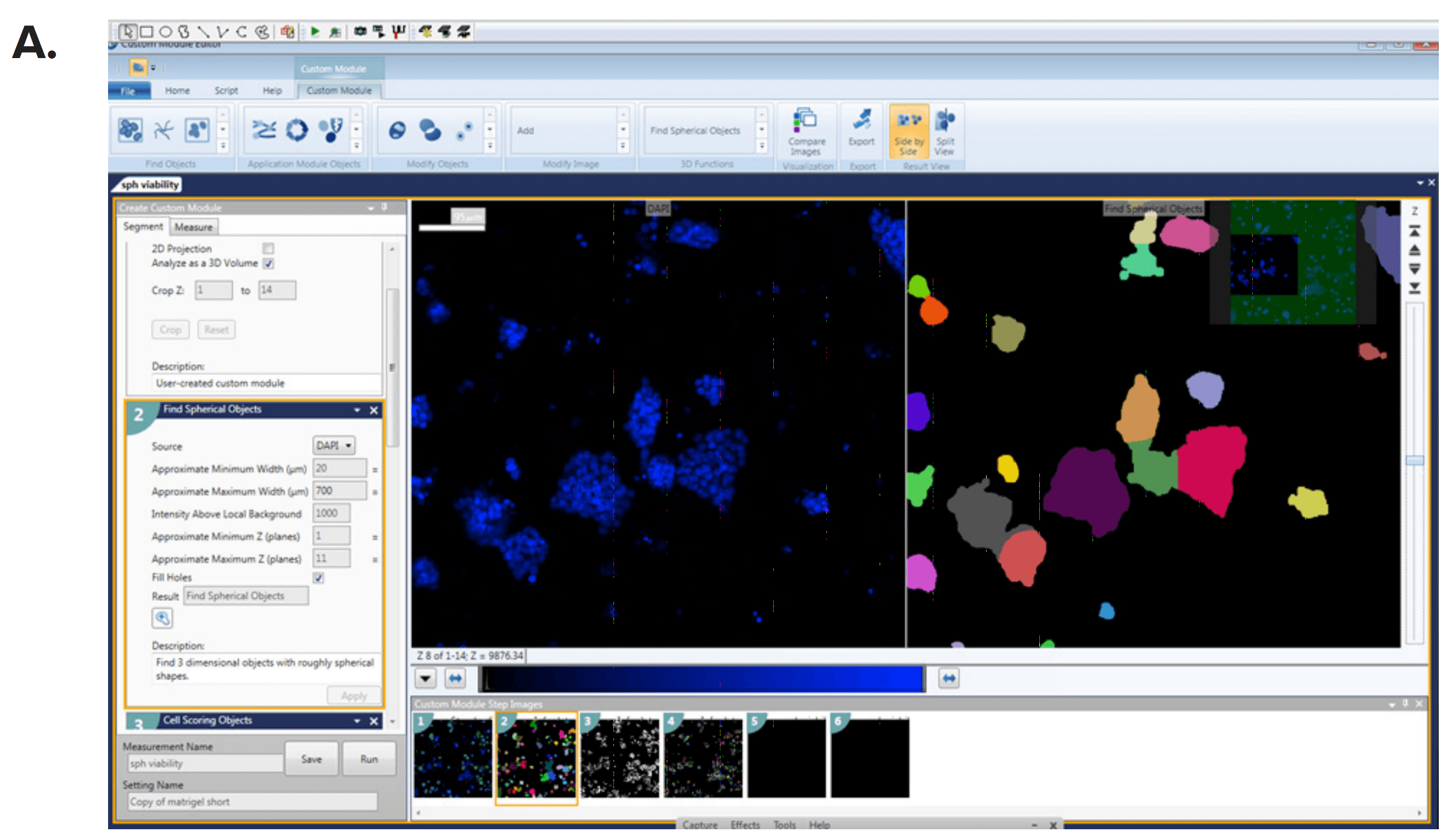 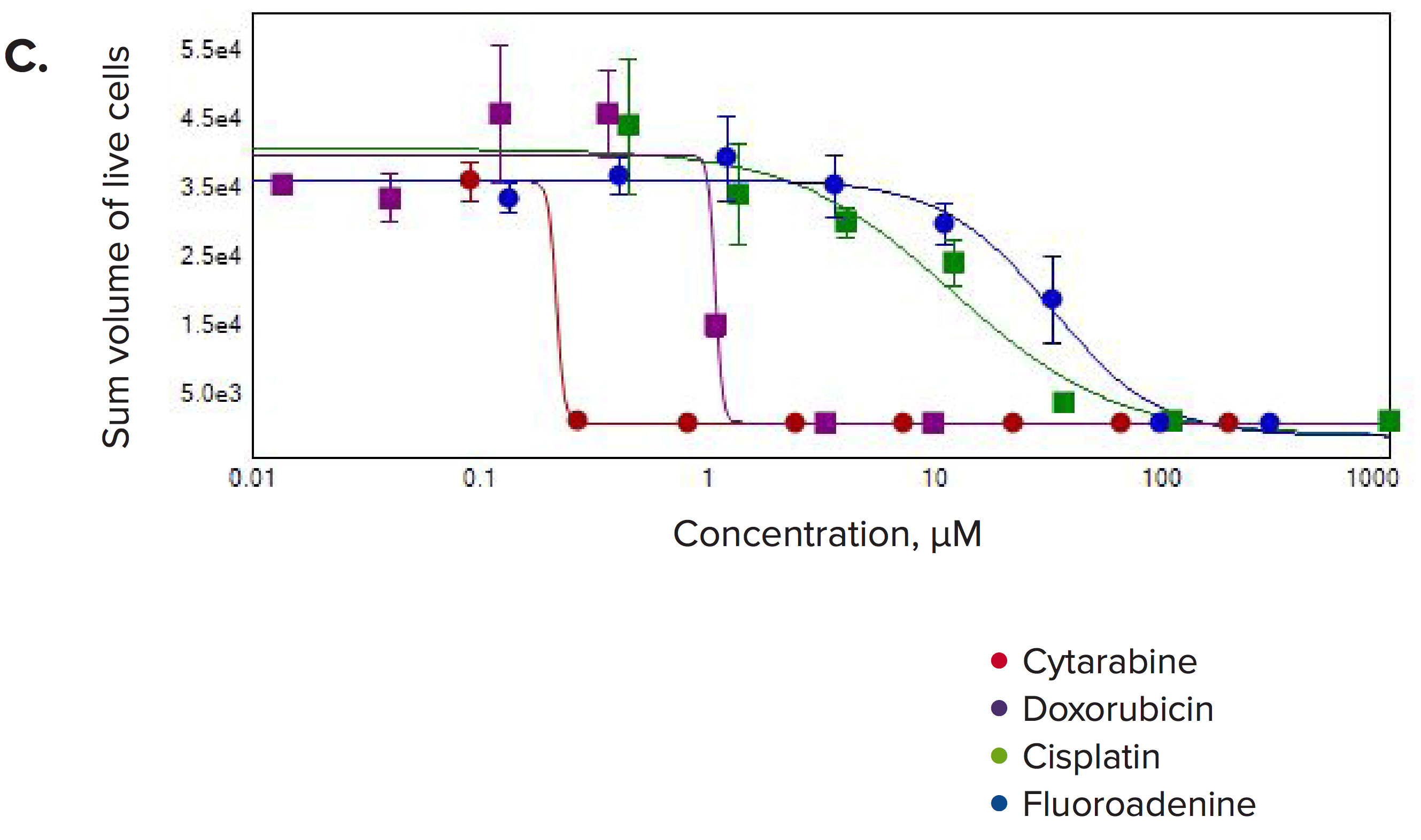 Figure 4. Concentration-responses for selected compounds. Measurements of (A) number of spheroids/well, (B) number of live cells/well, and (C) the sum volume of live cells/spheroid were calculated within the 3D volume.

We observed significant changes after compound treatment. In general, there was a reduction in the number of spheroids, as well as the number of cells per spheroid consistent with expected anti-proliferative effects. We also observed a concentrationdependent decrease in the sum volume of live cells within each spheroid, the spheroid size, and the number of viable cells. The intensities for calcein AM or Phalloidin staining were dramatically reduced for the spheroid and also for individual cells. Measurements of the number of spheroids in the 3D volume were used to calculate the IC50 values showing the response to the anti-cancer compounds (Table 1).

Table 1. IC50 values measured for selected compounds using number of spheroid per well as a readout.