COVID-19 RESPONSE - We are committed to supporting our scientific community during this pandemic. Learn more

We evaluated the neurite outgrowth assay on the ImageXpress™ Pico Automated Cell Imaging System to measure the ability of compounds to adversely affect the developing nervous system. This assay was selected due to its relevance as a critical process in nervous system development in which neurons extend their neurites to form a complete neural network1,2. Total neurite outgrowth is typically the most common metric reported3,4, while additional parameters, such as total branches and total processes may represent additional modes by which compounds may inhibit neurite outgrowth.

iPSC-derived neurons were plated on poly-D-lysine, pre-coated 384-well plates treated with 3.3 mg/mL laminin. Ten thousand cells were plated per well and maintained in iCell Neuron Maintenance Medium for 48 h prior to compound treatment. Neurite networks in these cells typically start to form at 2 h post plating and increase in complexity up to 10–12 days in culture. Neurons were cultured for 14 days as recommended by the manufacturer, then treated for 72 h across a 6-point concentration range (0.3–100 μM) in 384-well plates. Effects on neurite outgrowth were assessed by quantifying total outgrowth, branches, processes, and the number of viable cells per well. Concentration-response dependencies were evaluated using EC50 values.

Cells were exposed to compounds for 72 h at 37°C and 5% CO2. Next, media was removed and cells were fixed with 4% formaldehyde, washed 2x, and then, incubated with a 1:100 mixture of AF-488 conjugated phalloidin, and 1 μm Hoechst 33342 in sterile Hank’s Balanced Salt Solution for 2 h. Calcein AM was used as a marker for neurite outgrowth and cell viability. After incubation, the staining solution was replaced with phosphate buffered saline (PBS) containing 0.1% of Fetal Bovine Serum (FBS) for image capture.

Images from individual wells were acquired with the ImageXpress Pico system using a 10X objective. Typically, one 10X image was captured per well in a 384-well plate. A 10X objective provides sufficient resolution to distinguish neurite networks and subcellular structures in a relatively large number of cells (>200) per image, which represents about 1/6th of the total well area. Analysis was run on-the-fly using CellReporterXpress software, which contains analysis modules for neurite tracing. Figure 1 shows a representative zoomed-in image from DMSO-treated neurons with the neurite tracing overlay.

We observed dose-dependent inhibition of the neurite network formation with compound treatment (Figure 2). Quantitative analysis of the images captured in these experiments included the derivation of multiple parameters that allow for the assessment of both morphological features of cultured neurons and the extent and degree of complexity of the neuronal networks. Number of total cell bodies in the image was also quantitated for estimations of compound-induced cytotoxicity. Since cell plating and neurite outgrowth were very consistent and uniform across the experiment, we used total numbers of neurons per image for statistical analysis. Length of outgrowth per cell or numbers of processes or branches per individual cell were also measured but not used for statistical analysis because of redundancy. The toxic effects of compounds can be compared by EC50 values (concentration of compound for 50% inhibition of neurite outgrowth) derived from 4-parametric curve fit for neurite outgrowth, number of branches, processes, or number of viable cells. Figure 2 presents concentration-dependent curves for the total length of neurite networks (total outgrowth) across various compounds (1 μM concentration) to assess their potential neurotoxic effects and prioritize for further toxicity evaluation. Figures 3 and 4 present neurotoxic compounds tested at 10 μM concentrations. 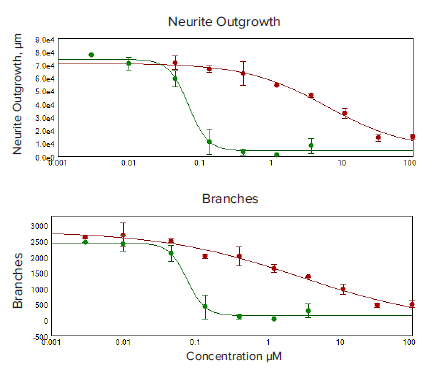 The assay can be useful for studies of different modulators of neurite outgrowth as well as in vitro neurotoxicity effects.