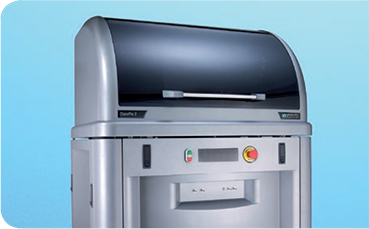 During the last decade, production of monoclonal antibodies and recombinant proteins by mammalian cells has become a cutting edge technology. However, the generation of transient as well as stable cell lines has been a major challenge for many cell types since overall transfection efficiencies and/or integration frequencies reveal considerable variation. Selection of high-productivity clones in a transfected pool of cells poses a major bottleneck in cell-line development and manufacturing of recombinant proteins and monoclonal antibodies (mAbs). As transfected pool of cells is teeming with low producers, and high producers are rare, spotting a desirable high-producing clone is tantamount to finding a needle in a haystack.

ClonePix™ System technology and associated reagents represent a well-established one-step solution for the identification and isolation of rare clones from large heterogeneous cell populations without the need for labor- and time-intensive limiting dilution (manual methods) or other cumbersome cell screening techniques. The ClonePix System captures both white light and fluorescent images in situ to quantify the fluorescent protein expression levels with capabilities of picking both suspension and adherent cells. The latter, such as HEK 293 and CHO-K1 cell lines, require an efficient and gentle picking process to retain cell viability for further clonal expansion. In previous years, we have successfully demonstrated the capability of the ClonePix System to perform high-throughput cell selection and product secretion–based clone isolation for suspension cells that are plated at low density in a semisolid medium supplemented with a fluorescently tagged antibody that is specific to the secreted product. High producers are thus identified at the first stage of screening, which subsequently shortens the overall development timeline.

Suspension cells are predominantly used in cell line development, however the suspension cell lines have traditionally proven to be difficult to transfect. One main advantage of using adherent cells is the ease of transfection, especially when testing various reporter constructs. Furthermore, the screening process can be a lot easier for adherent cell selection with the aid of ClonePix System, based on the intracellular or cell surface expression of reporter protein. Additionally, the ClonePix System can be useful to identify and isolate clones expressing recombinant proteins apart from hybridomas/cell lines secreting monoclonal antibodies. The desirable adherent clones identified by intracellular or cell surface fluorescence intensity would thereby indicate clones with stable protein expression and/or correct protein conformation.

Two adherent cell lines, one expressing green fluorescent protein and the other red fluorescent protein were used to evaluate the efficacy of the ClonePix 2 System with a range of adherent cell picking reagents of increasing stringency for use in cell culture. Here we present a workflow for adherent cell picking using the ClonePix System in which distinct clones can be imaged with the specific fluorescence channels, analyzed and picked proficiently. Data illustrated here display sustaining cell viability post-picking and clonal expansion with subsequent culturing into 96-well plates.

The HEK-GFP and HEK-RFP cells were mixed at equal ratios in a range of low- to high-cell densities (25 cells/well – 300 cells/ well) and plated on a series of 6-well tissue culture treated plates to encourage formation of adherent colonies. The cells were co-cultured for seven days in liquid tissue culture media at 37°C, 5% CO2 , monitored periodically for colony formation. Low plating density resulted in forming discrete clonal colonies.

Upon successful formation of colonies (typically 7-10 days post-plating), the following adherent picking protocol was implemented using the adherent cell picking reagent test kit (Molecular Devices Cat. #K8005). The four Adherent Cell Picking Reagents from the kit (A, B, C, and D) comprise a range of increasing stringency from very low to high. The appropriate stringency conducive for gentle plus efficient cell dissociation and picking was evaluated empirically with each respective picking reagent solutions A, B, C, and D.

Note: K8005 is a test kit of 4 different picking reagents—the optimum stringency for efficient picking and survival post-picking would be contingent upon a particular cell line).

For screening and selection of colonies, ClonePix 2 System enabled the imaging in white light and multiplex fluorescence channel. Using userdefined selection criteria, the colonies were ranked according to interior mean fluorescence intensity 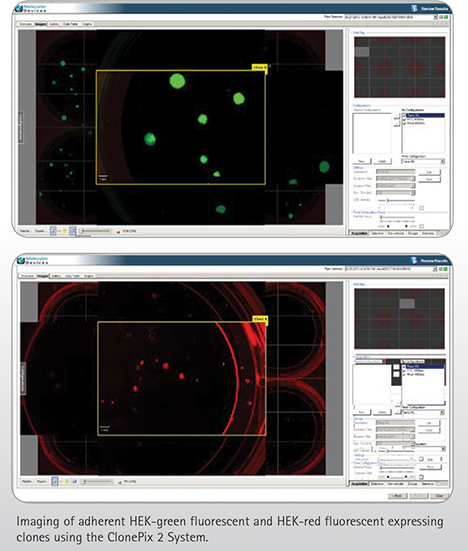 Imaging software generates a 2-D map of clones and their secretion levels from a series of images generated in situ. Screening and selection of colonies is based upon several criteria:

Colonies displaying high levels of interior mean fluorescence were selected for picking based on three groups—green only, red only, plus both green and red fluorescence expression. The picked colonies were transferred to a 96-well plate for expansion. Isolated clones were monitored for viability and growth using CloneSelect Imager.

To investigate the rate of viability of the picked cells, CloneSelect Imager was used to monitor cell growth in the 96-well destination plates for seven days post-picking. Good growth was seen with wells achieving up to 98% confluence within seven days. The picking reagents type C and D were optimal as compared to type A and B, for the cell lines used in this study as demonstrated by 100% survival and 98% cell expansion/confluence in the corresponding picked wells. The picking treatment with reagents type A and B were unsuccessful in disrupting the attachment of the adherent clones from the base of the plate. For efficacious picking of different types of adherent cell lines, the optimal picking reagent stringencies can vary depending on intrinsic properties of the cell lines.

Validation of fluorescence based clone selection

Accuracy of picking was validated by imaging wells using the ImageXpress® Micro Widefield High Content Screening System. Of the HEK-GFP and HEK-RFP classified picked wells, 98% of clones demonstrated either GFP or RFP only respectively. This demonstrates the ClonePix 2 System’s ability to accurately differentiate and select between the green and red fluorescence with a high level of confidence. 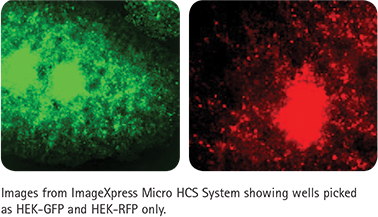 Mammalian cell culture technology has greatly expanded its application from basic research to the biopharmaceutical industry for the manufacturing of biotherapeutic agents, such as vaccines, monoclonal antibodies, and bioactive recombinant proteins. ClonePix Technology provides a rapid solution for picking adherent cells while maintaining viability that is critical for cell line expansion downstream. The picking process on the ClonePix System is independent of enzymatic digestion of cell-surface proteins (such as trypsin-treatment), and thereby enables quick and gentle picking of colonies while maintaining clonality.

A range of four Adherent Cell Picking Reagents of increasing stringency (A-D) described here, are effective on a wide range of anchorage dependent cell lines, enabling detachment and picking of clones on the ClonePix System. The optimal picking efficiency in relation to the stringency of picking reagents varies with different cell lines and would be dependent on the particular intrinsic characteristics of the cell lines, and needs to be determined empirically. Furthermore, as these picking reagents are chemicallydefined and free of animal products, it provides an excellent non-animal derived ready-to-use alternative for complying with ever increasing regulatory requirements.