The timeline to identify and develop clinically effective neutralizing antibodies against viral particles from bench to patient is typically 18 to 24 months. The worldwide race to identify effective neutralizing antibodies against the spike protein of SARS-CoV-2 virus became a life and death matter as the global death toll climbed in the first year of the COVID-19 pandemic.

Using a combination of CloneSelect instruments from Molecular Devices, with the CloneSelect™ Single-Cell Printer™ and CloneSelect Imager, the timeline for preclinical development of effective neutralizing antibodies can be significantly shortened. In fact, the speed at which the pharmaceutical world was able to create and deploy SARS-CoV-2 monoclonal antibodies speaks to the power and promise of cell line development automation.

In this article, we demonstrate the steps to develop monoclonal antibodies with Molecular Devices instruments from clonal selection to cell growth tracking to image-based assurance of monoclonality. An image-based monoclonality report is then generated to be included in global licensing applications such as the Biologics License Application (BLA) to the US Food and Drug Administration (FDA).

Monoclonal Antibodies as an Alternative to Convalescent Plasma Therapy

Figure 1 - Neutralizing antibodies prevent the virus from entering the cell by binding to the spike protein.

Neutralizing antibodies emerged as one of the most effective methods of combating SARS-CoV-2. By binding to the spike protein on the virus or the ACE2 host receptors, they prevent the virus from entering the cell. Through convalescent plasma therapy, neutralizing antibodies isolated from blood cells of recovered patients are used to decrease viral load and mortality rate in patients with severe symptoms [1][2][3]. However, this therapy requires donors with high blood concentrations of neutralizing antibodies which can make finding suitable donors challenging [4].

More recently, monoclonal antibodies, laboratory-made antibodies cloned from white blood cells, are available for use to treat the SARS-CoV-2 virus. The word monoclonal describes a cell line that originates from a single progenitor (single cell) and documenting evidence of clonality is required for regulatory filing. Preliminary results showed that these antibodies provide immunological support for at least 5-7 months [5]. Given the therapeutic potential, fast and efficient monoclonal antibody production has become increasingly crucial.

There is one problem with monoclonal antibodies: the time from discovery to proof-of-concept trials. The timeline from the identification of the antibody through to the IND Phase-I trial can take up to 10-12 months [6]. However, with fast and efficient transfection, selection, and clone screening, there are ways to accelerate the process and reduce the production timeline by half. 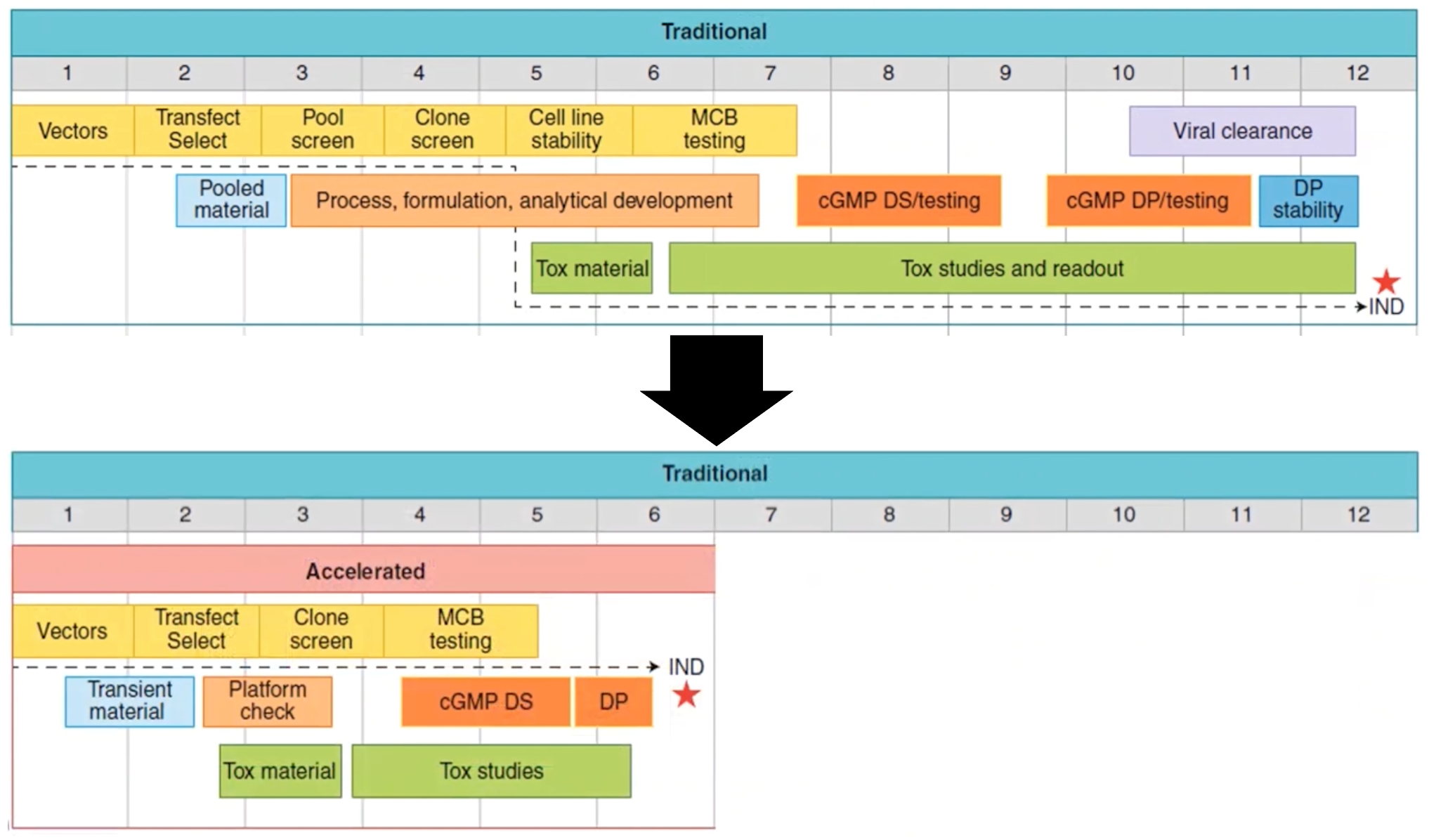 Figure 2 - The time from discovery to proof-of-concept trials could be reduced to 5–6 months from a traditional timeline of 10–12 months.

As regulations for cell line development become increasingly more stringent, researchers will be required to perform single-cell cloning and provide evidence that a cell line is derived from a single cell—proof of clonality. Traditional cloning methods (e.g., limiting dilution and FACS) use statistical analysis to determine a confidence level for monoclonality. However, the documentation of monoclonality has driven the need for more robust technologies and methodologies in bioprocessing. Many researchers now routinely use imaging systems, such as the CloneSelect Imager, to verify monoclonality and monitor cell growth in cell culture media. 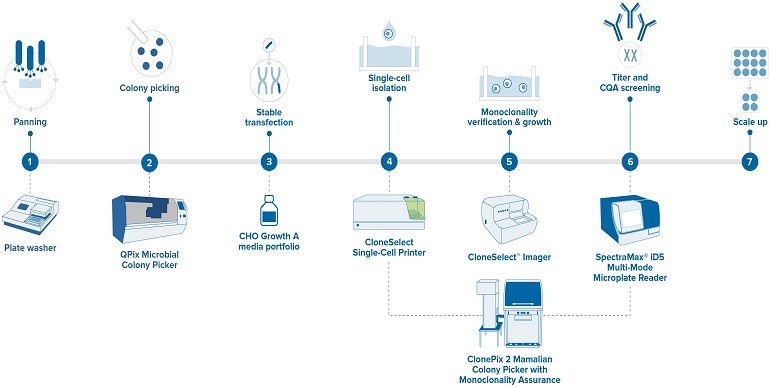 The key to robust monoclonal antibody production is to isolate individual high-performing cells. However, there are various challenges of single-cell isolation, such as obtaining a sufficient number of target cells and maintaining cell viability.

Limiting dilution (LD) is a traditional isolation method, where the parent cell culture undergoes a series of dilutions until there is one cell per one plate in a well based on probability calculations. The main drawback comes from its low efficiency of isolation, meaning that the number of cells per plate fluctuates between zero and multiple cells [7].

Flow cytometry (FC) is a more successful isolation method that implements fluorescence-activated cell sorting, but it compromises cell viability, due to high pressure, exposure to electric charge, and frequent high-speed collisions. The unviable conditions lead to what is known as sorter-induced cellular stress (SICS) [8]. So, if you are working with sensitive cell types, the cell line obtained from flow cytometry may not be suitable for further research and set your timeline back by months.

Microfluidics, the process of isolating single cells in microfluidic chips, has been emerging as a more efficient alternative to conventional methods. One factor that makes microfluidics stand out is the massive reduction in input volumes, as you are loading your samples into microliter chips. Since the microchips have lower sorting pressure, the SICS risk is also reduced. Finally, microfluidics eliminates the risk of sample-to-sample contamination [9].

We recently compared the single-cell efficiency of these three methods. For the demonstration of microfluidics-based isolation, we used our CloneSelect Single-Cell Printer that combines the technology with high-resolution imaging to isolate individual cells while recording image-based evidence of monoclonality. As you can see in the bar chart below, the CloneSelect Single-Cell Printer outperformed LD and FC by 8-fold and 10-20%, respectively. 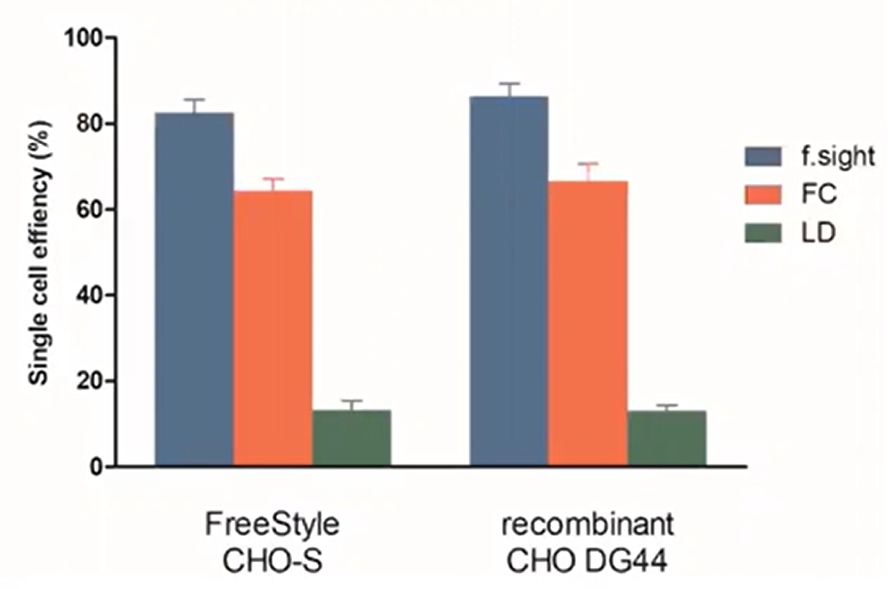 The next question is: How does single-cell efficiency translate when you are trying to generate monoclonal colonies?

For the colonial outgrowth comparison of microfluidics to LD and FC, we used the CloneSelect Imager, which allowed us to scan division from a single cell for 90 seconds. The CloneSelect Imager provided both chart statistics and visual thumbnails of cell growth as evidence. Since the CSI enables subsequent scanning of the plate for 14 days, you can easily trace back from the final image to day zero to prove that the colony indeed formed from a single cell. In addition, you can export your colony images as a PDF or Word report for image-based monoclonality assurance.

So, how does this contribute to reducing the timeline? Instead of two-round isolation for providing probability-based and image-based assurance, you could use a single-cell printer and imager synergistically for one round of cloning. This method was proven to confer monoclonality assurance with over 99.99% confidence [10].

The outgrowth efficiency results are represented below for both freestyle and recombinant CHO cells. 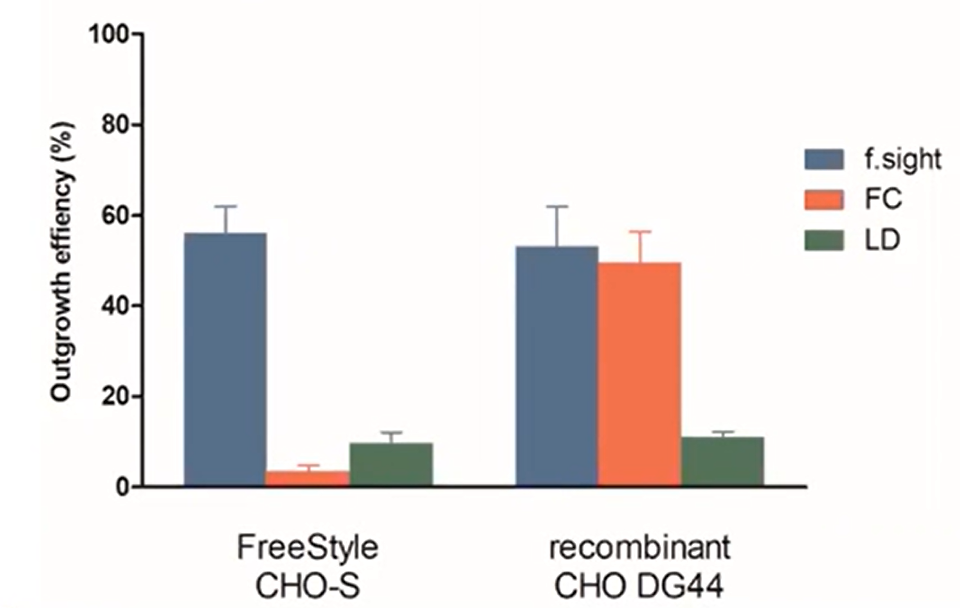 Isolation of candidate mammalian cell clones can be strenuous and time-consuming, as you need to screen hundreds of thousands of clones not only for monoclonality but also for sufficient secretion of antibodies.

Molecular Devices has developed the ClonePix® System for an end-to-end automated cell line development workflow with proof of monoclonality. The ClonePix System is equipped to screen and quantify neutralizing antibodies secreted from a large number of CHO clones in situ. The software uses a fluorescent detection probe to quantify secretion and automatically picks the clones with the highest yield.

As illustrated below, the ClonePix® outperforms LD in several aspects. Not only can it screen a substantially greater number of colonies using fewer plates, but it also picks colonies that have higher yields. 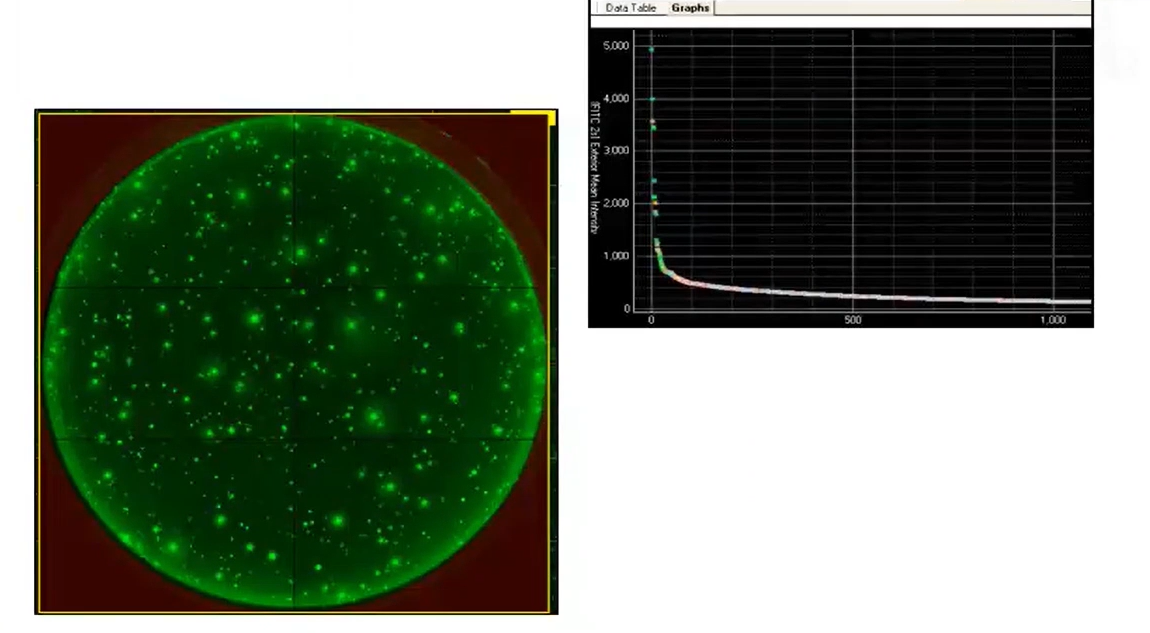 What about timeline reduction? The original version of the ClonePix2 Mammalian Colony Picker workflow requires two rounds of screening, as suggested by FDA, in concert with the CloneSelect Single-Cell Printer and Imager combination.

Let’s make your ideas a reality! Our customization and automation team has successfully customized the ClonePix 2 Mammalian Colony Picker for customers by request—including software and hardware. For example, by updating the system with additional monoclonal assurance capabilities, a single instrument can serve all monoclonal antibody production workflow needs from antibody screening to titer with one round of clone screening.

With Molecular Devices automated clone screening workflows, you can ease the burden on your lab by significantly reducing hands-on-time while creating a central repository for data pulled from multiple processes. Our automated solutions unify all of your laboratory devices to increase your throughput and efficiency while reducing human interaction.

Monoclonal antibody development poses a great potential for fighting the Coronavirus as well as other infectious diseases and those to come. However, it is a temperamental biological process and requires intricate single-cell isolation, as well as sufficient proof of monoclonality. With Molecular Devices’ solutions, we aim to provide you with tools that will help you to efficiently isolate your clones of interest and create the next great thing in biopharmaceuticals.

If you want to find out more about the workflow for neutralizing antibodies for SARS-CoV-2 and how Molecular Devices can optimize it, you can view our free webinar, presented by Rebecca Kreipke, Ph.D., BiPharma Field Applications Scientist.

How to Develop Monoclonal Cell Lines for Stem Cell Engineering

Monoclonal assurance is undeniably critical in cell line development for…

Lab Automation 101: Inside Access From Our Subject Matter Expert

In life sciences, more is more. Obtaining a great body of data that is…

History of Organoid Research: From Sponge Cells to Functional Organs

Let's begin with a simple definition of an organoid which, refers to a…

From customer feedback to workflow improvements The path to…